You know how something isn’t in your consciousness at all and then one day, you discover it, and suddenly they seem to be everywhere? That’s how it was for me and Red Velvet cupcakes. The first time I ever heard of red velvet cupcakes was when a friend recently told me about the most amazing red velvet cupcakes she had in Chicago. It still didn’t really register in my mind then because I had not really had any opportunity to try them.

Then on my birthday, my friend Jessica brought me a red velvet cupcake from Sugar Butter Flour (no, not the blogger), a local bakery that she had just discovered and loved. I took one bite of the cupcake… and the next thing I knew, all that was left were crumbs on the table. That cupcake was amazingly good. I started going back to Sugar, Butter, Flour often, just to get my red velvet cupcake fix.

I was hooked on red velvet cupcakes! 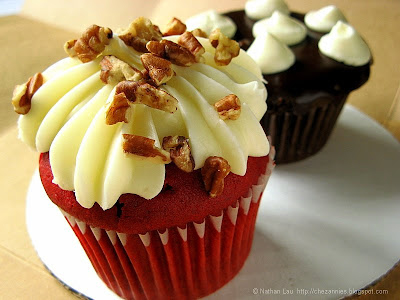 Then I decided it was time to try to make this on my own. And yes, just around the time I started looking up recipes, pictures of these cupcakes started to appear in more blogs and food picture sites. It was like a signpost telling me, “Jump on the bandwagon, Annie, and get on with it.”

Jumping on the bandwagon

So last week, I had guests over and decided to try a recipe. It didn’t look too hard. I had almost everything needed including red food coloring (all 2 Tbsp of it!). I also figured, I had a flavor standard (the Sugar, Butter Flour cupcakes that I devoured so much of to feed my addiction) that I could use as my benchmark. 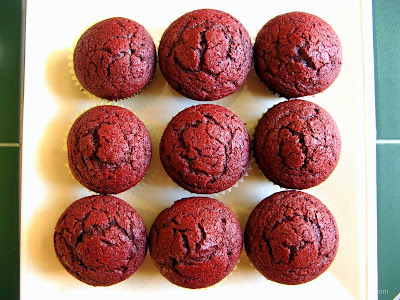 For my first attempt, I tried the recipe posted on Em’s blog. It was a very simple recipe and didn’t take too much time at all. 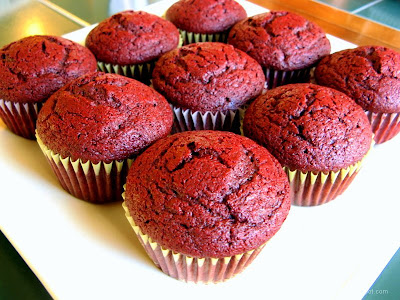 Frosting to die for

I found the cupcake recipe itself to be not moist enough (it wasn’t a bad recipe but not quite what I am looking for). But the killer in this recipe had to be the frosting—it was SO GOOD!

Seriously, that frosting—TO DIE FOR! And when I served it after our Killer Kalbi meal, even my overstuffed friends found room to eat a cupcake. One friend who doesn’t care too much for cakes said she would share with her hubby and took one bite then took another and then another. She said the frosting was really good. So Em, thank you so much for the incredible frosting. I don’t think I need to look for any other frosting. 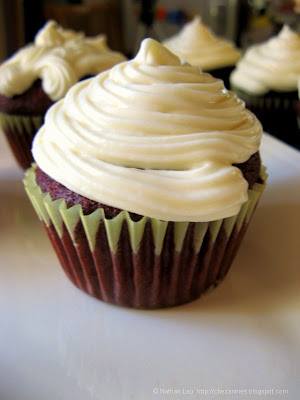 Coming back to the cake itself, I’m still on my search. The next recipe I try will be one I found on the Food Network website. Do you have a red velvet recipe that you’d like to share?

24 thoughts on “Rolling Out the Red Velvet Cupcakes”