We were in the neighborhood so we decided to stop in at Tokushima do Henkotsu for some of their delicious ramen and fried rice. But when we got there, we found that the shop had changed! Apparently the old guy had retired, and there was a newer, “hipper” ramen shop in the same place. We thought we’d stay and test it out. (“You never know unless you try.”) The menu isn’t very extensive, nor expensive. The waitress said her favorite was the miso ramen with vegetables. I got that while Annie ordered the shoyu ramen with vegetables.
END_OF_DOCUMENT_TOKEN_TO_BE_REPLACED

Went to the Tokushima do-Henkotsu Ramen restaurant yesterday for dinner. It is located in a little mall on Saratoga Avenue near Hwy 280 in west San Jose, right next to the Mitsuwa Marketplace. We’ve eaten here before, but wanted to introduce a friend of ours to this place.

We got there a little after 6 pm – traffic was pretty bad as it was rush hour on Friday – but we were able to find a table. The place is even smaller than Ramen Halu. Lucky we got a table right away because people who came after us had to wait.
END_OF_DOCUMENT_TOKEN_TO_BE_REPLACED

Ramen Halu on Saratoga Ave in west San Jose was recommended to us as the best place for ramen in the South Bay (which isn’t saying much because there aren’t that many good ramen places here). We showed up a little before 6 and there was a long line in front of the shop. Their website says they open at 5 but the sign in the window said 6. Oh well.

Annie ordered the house special Halu ramen, which is a thick, rich broth paired with thick noodles. I got the classic shoyu ramen which is a thinner broth and thinner noodles. Both noodles had a nice, springy chew to them. My bowl came with “the Works” which includes bamboo shoots, corn, wood ear fungus, cabbage, almost-hard boiled egg, green onions, chashu roast pork, and a couple sheets of nori. 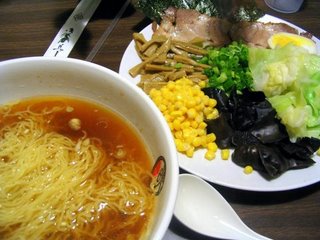