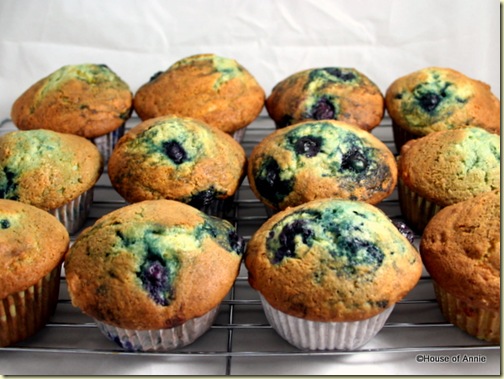 These days, I don’t bake as much as I used to. I just can’t afford the sugar and calories anymore. At least while I was a graduate student living in a graduate dorm, I could always pass out my baking to all the hungry students and not eat them all myself.

These days, I’m being more careful to only bake when I have an occasion to bring them somewhere or when I have people over. Otherwise, being a stay-at-home mom, these baked goods somehow find their way into my hands and quickly into the safest place possible (my tummy! ^_^).

So even though I love to bake, I’ve resigned myself to doing it occasionally rather than as often as I would like. Last night though, I really wanted to bake even though I had no reason to (seriously, do we ever really need a reason?) nor any occasion for it!

Luckily for Nate, I decided to bake some blueberry muffins. I mentioned after dinner that I was feeling very much like baking something and I said, “How about some blueberry muffins?” You should have seen his eyes gleam when I said that. He absolutely loves blueberry muffins and remembers how, before he met me, he used to make them from a box and devour them all. I, of course, have much higher standards than baking from a box!

Now, it’s been a really long time since I baked blueberry muffins and I don’t even recall where my last recipe was from. Thankfully, this is when cookbooks come in handy. I referred to two different trusted cookbooks—Beranbaum’s Bread Bible (I guess muffins are a quick bread) and The Best Recipe (Cook’s Illustrated’s cookbook). Both recipes sounded good with one ingredient that was different—one used sour cream, the other yogurt. As fate would have it, I actually had both handy that day. Decisions, decisions…

So ok, I’m partial to Beranbaum. Everything that I’ve tried from her cookbooks have turned out fabulous and never so sweet as to get my teeth grating. So I decided she won the coin toss this round. I baked up her blueberry muffins recipe. And it was delicious! Crusty on the outside and tender and soft on the inside. And bursting with blueberries with a slight lemon tang that perfectly accentuated the blueberries and sour cream. adapted from “The Bread Bible” by Rose Levy Beranbaum

Makes 6 large muffins (unless you’re [and it’s “you’re” not “your”—the English teacher in me cringes at how often this is now common usage] like me and have to just bake up a dozen because you’re pake and since you have the oven on, you might as well utilize it as much as you can [and the English teacher in me is cringing at my super run-on sentence])

Method
1. Preheat oven to 375 F.
2. In a large bowl, cream butter, sugar, and lemon zest until light and fluffy. Beat in the egg and vanilla.

Butter and Sugar Ready to be Creamed 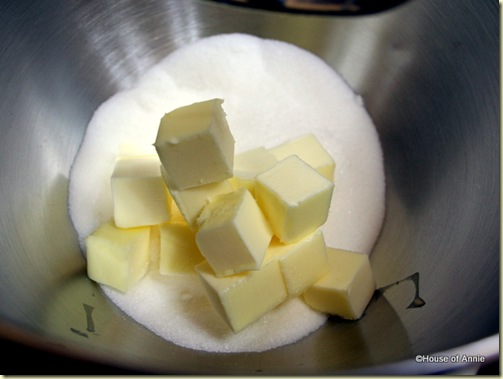 3. In a small bowl, whisk together the flour, baking soda, and salt. Spoon half the flour mixture and half the sour cream into the batter/sugar mixture and fold in with a rubber spatula until flour has mostly disappeared. Repeat with the remaining flour and sour cream, folding in just until the flour disappears.
4. Fold in the blueberries gently.
5. Fill the muffin pan (or ramekins or custard cups) almost to the top. Batter will be somewhat stiff (especially if using frozen blueberries). 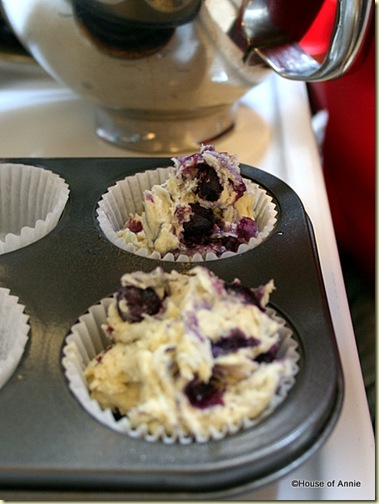 6. Bake for 25 to 35 minutes or until the muffins spring back when pressed lightly in the center with a fingertip and a wooden toothpick inserted in the center comes out clean.
7. Unmold muffins and cool on a wire rack. Serve warm or at room temperature.

When the timer went off and I asked Nate to check to make sure the blueberry muffins were done, he opened the oven and exclaimed, “Oh maaan! They look soooo good!” And they were. Nicely domed and perfectly golden. Nate could barely contain himself. I’m surprised he didn’t grab one right off the muffin pan when they came out. He actually had enough restraint to take some pictures before diving into one.

Blueberry Muffin Made from Scratch 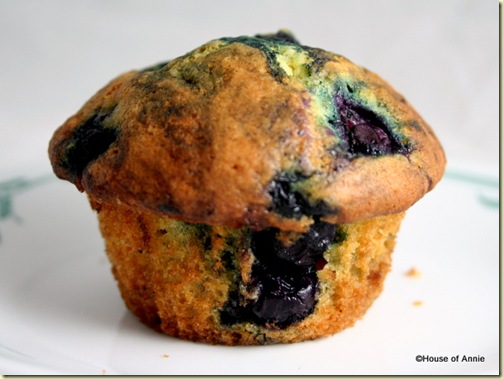 Well, he polished off two blueberry muffins that very night! And my kids had one each for breakfast this morning. It is definitely a winner of a recipe. But I can’t help wondering if the other blueberry muffins recipe would have been better or just as good. After all, those people test all their recipes a gazillion times…surely it must be just as good (and yes, they did try sour cream and they still claimed that yogurt was better).

So I have to do a bake-off and try the other recipe. It shouldn’t be too hard to do since I have yogurt on hand and even though I doubled the recipe this time, I’m only left with three more blueberry muffins (I shared some with my neighbor). And yes, I do have more blueberries (I have a bag of frozen ones handy that my kids like to snack on, and it turns out they are great for baking muffins too!).

So stay tuned to my next “baking-for-no-other-reason-other-than-plain curiousity” and if you’re in my neighborhood, drop by for a taste! In the meantime, enjoy Beranbaum’s blueberry muffins recipe!