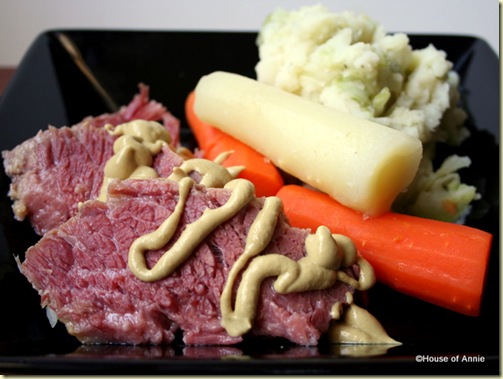 All my life growing up, my mom would make corned beef for us out of a can. Corned beef was like Spam, except it was beef instead of pork. To me, corned beef was something you’d fry up with some egg (like an omelet) and then sandwich between two slices of buttered bread with a squirt of ketchup. It was delicious. That was the only corned beef I knew. I never knew any other kind existed.

The first time I had real corned beef was in Hawaii, when I was with my dear friend, June. She had invited me to her house for some corned beef and cabbage. I was happy to have it, and was expecting what my mom had made me all my growing up years.

So consider my surprise when I was presented with this big chunk of beef which was then thinly sliced and served with boiled carrots, potatoes and cabbage, with a mix of two mustards to schmear on said items. 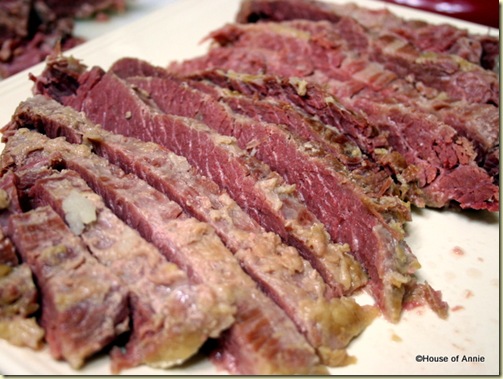 I didn’t quite know what to expect of its flavors because boiled foods have never appealed to me. But I must say, that that meal was a delightful surprise. I enjoyed every bite.

The next time I had it was at Nate’s home. He told me he was going to make corned beef and cabbage for St. Patrick’s Day. And after having experienced the wonders of this simple meal at June’s, I was glad to go over to his place to have some. Imagine my surprise when I saw him cubing the corned beef and throwing it into a pressure cooker along with the carrots and potatoes to cook.

Somehow, cutting up the meat into cubes caused all the flavor to be released into the liquids, leaving the corned beef bereft of taste. Texturally, it wasn’t very appealing either. And the potatoes and carrots were pressure cooked to death. Since we were dating at the time, I think I tried to be polite about the dish. I did not enjoy it but I ate it anyway.

Now if this had been my first experience with corned beef, I probably would never have wanted to eat it again. I decided that the first chance I got, I would boil it the way June did it and let Nate have a taste. Nowadays, boiling our corned beef is the method of choice.

A New Way to Enjoy Cabbage

I decided this year that I would try a new way of cooking cabbage. As I looked up corned beef recipes, I came across this Irish dish called colcannon. It calls for potatoes to be boiled and cabbage to be shredded and then steamed, and then both ingredients to be mixed together with some milk and seasonings.

I didn’t know how well this combination would work, but many reviewers highly recommended it. I decided to tweak the recipe a little bit by still boiling my potatoes in the pot with my corned beef, but instead of steaming the cabbage, I decided to sauté it with butter (because, you know, butter makes everything better!).

The results? Smashing! Cabbage was no longer the last thing to go. As a matter of fact, it is so good, I could eat this all on its own, even without the corned beef. I would eat three helpings of this if not for the fact that the butter and potatoes would just go straight to my hips.

So here I offer you an easy to prepare St. Patrick’s Day meal. I hope you give colcannon a shot. It is a simple and tasty dish that would make a great side any time of the year, but especially now when cabbage is so cheap.

Buy any size corned beef that you like. We prefer the larger sized ones so that we will have enough leftovers to make corned beef hash (that’s another post). Having tried some corned beef made from leaner cuts of beef, I would suggest sticking with the point cut of the brisket. Most of the fat is boiled off, but enough is left to keep the meat tender.

Meanwhile, prep your carrots. Try to choose fatter carrots for this cook. Peel four to five large carrots and cut them in half or thirds, depending on how big your carrot is. In the last hour of your cook, add the carrots to the pot with the corned beef.

Peel your potatoes, about one large potato per person (I recommend Russets). Add the potatoes in the last half hour of your cook. If you really don’t have the space in your pot, finish cooking your beef and carrots, remove them to rest in a warm oven, and then cook the potatoes in the broth.

1. Boil potatoes in the corned beef broth. (if you’re making this dish on its own, just use salted water.)

2. While potatoes are boiling, heat a large saute pan and melt butter in it over medium heat.

3. Once butter has melted, throw in the shredded cabbage. Season with salt and pepper.

4. Saute the cabbage until cabbage is soft but not browned.

5. When potatoes are tender, remove from water and place into a large bowl. Mash the potatoes or run them through a ricer. Add one cup of milk, and cabbage. Combine well. If the potatoes are dry, add more milk until you get a nice, creamy consistency.

Mashed Potatoes and Cabbage for Colcannon 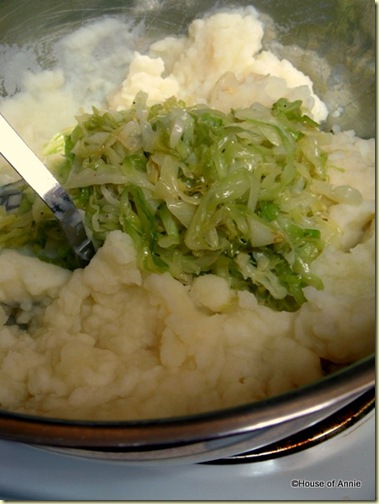 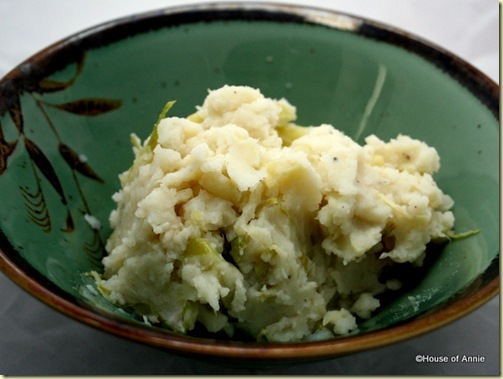 Feel free to spice this colcannon up if you want. We were thinking we might try it next time with some mustard seed or dill seed.

Serve this up alongside the corned beef and carrots. Don’t forget to serve it with some Dijon mustard and sweet honey mustard on the side. 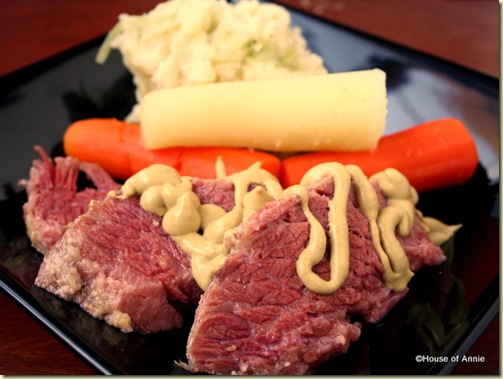 PS: Besides the corned beef, there’s another reason I really love St. Patrick’s Day. Can you guess what it is? ^_^

This post was entered in the March Potato Ho Showdown roundup, hosted by Krysta from Evil Chef Mom.