We were at the Saratoga Farmer’s Market the other day and stopped by at the Mission Fish vendor. They specialize in fish caught fresh in the Monterey Bay and always have a good selection. They’ll even clean and fillet the fish for you for free. The fish heads and bones they package up for sale, and that’s what we came home with. 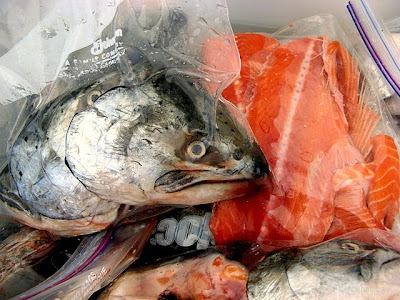 We took those fish head and bones and put them in a large stock pot, tossed in some shrimp shells, and added the mirepoix – onions, celery, and carrots – a cup of dry white wine, a quarter of a lemon, some whole peppercorns, a bay leaf, and some herbs de Provence, then covered with water. Brought it to a boil, then simmered for 1 hour before straining out the liquid.

Sauteed some onions, leek and garlic, then added some more wine, followed by tomatoes, saffron, vermouth, bay leaves, cayenne pepper, and salt and pepper. Oh, and the zest of one orange. Simmered for 20 minutes before we added the fish stock. Finally, we added chunks of halibut, red snapper, and some shrimp. 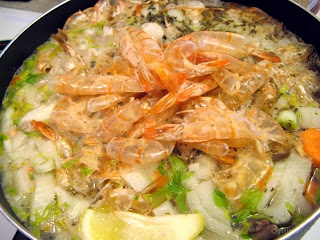 Served in a bowl with some chopped parsley for garnish and slices of a baguette. The orange zest really gave it a nice citrus perk while the cayenne gave it a little back heat. Very good! 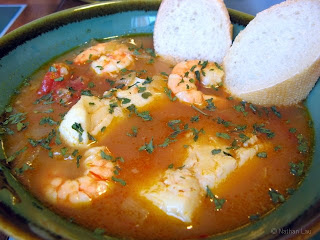 (Based on the Bouillabaisse recipe from “The Best Recipe” by the editors of Cook’s Illustrated magazine, pp 284-286.)

One thought on “Bouillabaisse”