When I was in San Jose, every so often, I would pop into a Korean grocery store and pick up several tubs of marinated bulgogi (uncooked) to cook at home.  One tub would be used on the day it was bought and the rest would be stuck in the freezer for other times when I wanted to convenience of cooking up a quick meal. 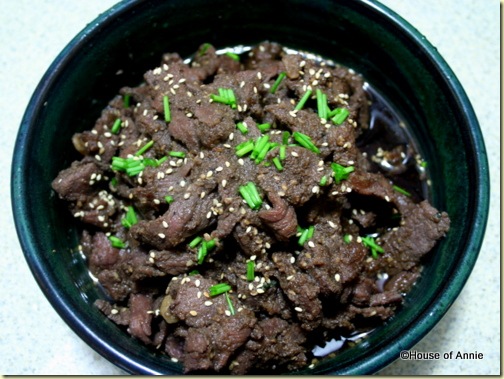 Here in Kuching, we found that there is a small enclave of Korean expatriates around (there’s even a small Korean grocery store here) and a few Korean restaurants.  So far, we’re tried two of the restaurants only to find them somewhat disappointing.

Just this past week, I had a hankering for some Korean food.  So I decided to make it myself.  After all, our Killer Kalbi recipe is probably one of our all-time most popular recipe (with good cause—it’s REALLY good).  So I decided I needed to expand my Korean repertoire.

Last night, I made Bulgogi and Jap Chae (I will blog this next).  And they were both really good.  They complemented each other perfectly and we almost didn’t need any rice.  We would have really gotten into the rice if I had some Korean seaweed (Kim) and kimchee to serve alongside the bulgogi.  But I had not gotten any unfortunately. Yes, I know, it’s not complete without all these lovely sides.  This will be my challenge next time (make Kimchee from scratch, not the seaweed!).

Bulgogi (to me) is a cousin to Kalbi.  The marinade is very similar except that Bulgogi is a lot easier to cook and eat (no bones to deal with).  It is very addictive too and I don’t know anyone who doesn’t love bulgogi when it’s served (except if you don’t eat beef).  In its most basic, you stick your thinly sliced rib-eye into a marinade and cook it up.  You can grill up the meat or just saute in a pan.  Grilling it gives it a more smoky flavour but you lose the sauce.

I personally prefer to saute it in a pan as I can treat it almost like a stir-fry that way and you will get to save the juices from the marinate.   I sometimes like to jazz it up a bit by adding some vegetables (this also makes me feel less guilty as it seems a little bit more healthy).  When I add vegetables, I will normally toss in some broccoli, mushrooms, carrots, and bell peppers along with some sliced onions.   This time around, I didn’t add any vegetables because I had put loads of veggies into my Jap Chae so I didn’t feel the Bulgogi needed it.

Method:
1.  Take your pear, onion, and garlic, and chop up fine in a food processor (or grate with a box grater).  Pour out into a large bowl.
2.  Add to that your soy sauce, honey, sugar, sake, sesame oil, and black pepper.  Mix the marinate ingredients well.
3.  Place sliced beef into the marinate and mix until well coated.  Cover with plastic wrap and stick beef into fridge to marinate overnight. 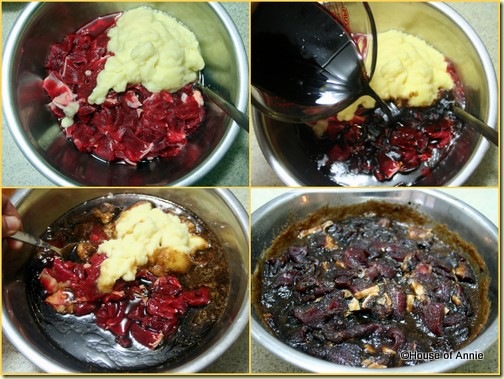 To cook:
4.  Heat up your frying pan and add some vegetable or sesame oil (if using sesame oil, be careful to watch so it doesn’t burn).  Add some chopped garlic and sliced onion (and other vegetables if you wish) and saute for a little while to just get rid of the rawness of it.
5.  Add the beef (only whatever you want to eat, save the rest for another meal) and cook over med-high heat until beef is just cooked.  Don’t overcook your meat guys—this is rib-eye after all!  A little red left won’t hurt. 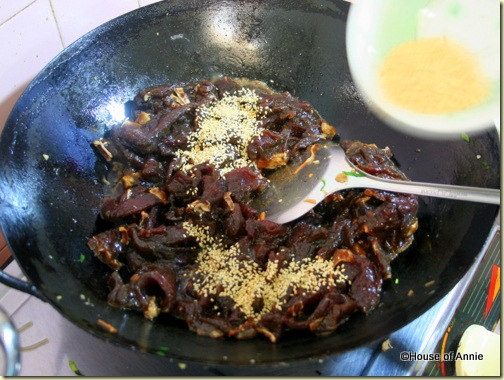 Dish out (juices and all), garnish with your chopped green onions and toasted sesame seeds, and serve over rice.  For the full Korean experience, you will want some banchan (Korean sides to go along with your Bulgogi).

When buying meat for Bulgogi, get some rib-eye beef.  You need some fat in your Bulgogi.  But since you will be marinating this for a long while, don’t bother to get prime or choice grade beef.  Using a lesser grade will be alright as you’re not cooking a steak, ya know?

And if your butcher is willing, get him to slice the beef thinly for you.  That’ll save you some work.  If your grocery doesn’t have that service, then the easiest way to slice it yourself is to freeze the beef before slicing.  What I did was to take out my beef and leave it in the fridge overnight to soften it just a little, then slice.  Use your sharpest knife to cut the beef as thinly as possible.

Once cut, it’s just a matter of putting together the marinade and mixing it into the sliced beef.  Leave that to marinate overnight for maximum flavour.  Of course, if you’re enterprising, you’d make enough for several meals, marinade and then freeze into meal-sized portions for easier cooking next time around.  This recipe should give you enough to make 2-3 lbs of meat so you can very easily freeze some for another meal.