Another of Borneo’s unique tropical fruit, the Mata Kuching (Cat’s Eye Fruit) is a cousin of the Longan (Dragon Eye Fruit). 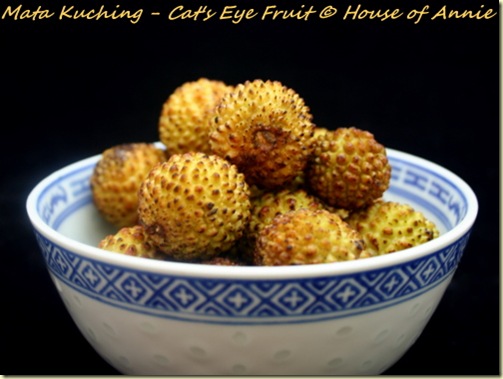 On the day we went to the market in Serian, we found this fruit which we had never seen before. It was round, about the diameter of a dime, and covered in tough, bumpy, leathery, yellow skin. We asked the vendor what it was, and she said “mata kuching”.

“Is it good?” we asked. Oh, yes, she replied. She let us peel open a few to taste. The fragrance and taste reminded me exactly of longan (dragon eye fruit). I thought to myself, why not give it a shot? So we came home with a kilogram of these fruit.

The Eye of the Cat

In the Bahasa Malaysia language, “mata” means “eyes” and “kuching” means “cat”. The fruit is called Cat’s Eyes because when you peel off the skin and expose the dark seed under the flesh, it looks like a cat’s eye. 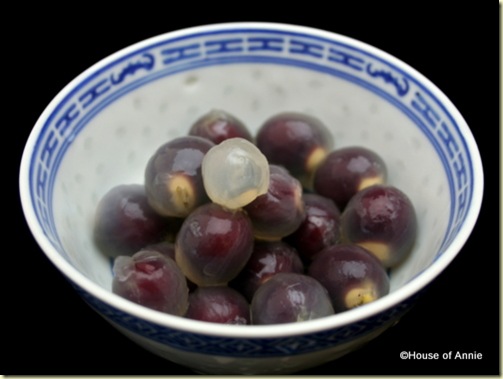 Mata Kuching trees grow prolifically here in Sarawak and Sabah on Borneo. One of the explanations for how our city of Kuching got its name is that the city started along the banks of the river where many of these mata kuching trees were growing.

According to International Society for Horticultural Science, the mata kuching is actually a close relative of the longan (hence the similar smell and taste). There are 3 varieties of mata kuching fruit which have “warty” skins and a 4th variety which is smooth and most closely resembles the longan.

The yellow-skinned variety has skin which feels very bumpy on the outside, almost like a lychee. This fruit with a large seed pit and very little flesh. When I found out how little meat was on the “bone” of the fruit, I was put off and a little upset at paying so much for so little edible meat. I ended up tossing the rest.

Our friend Mike recently gave us some mata kuching which he brought back from Sibu, a town about 6 hour’s drive away. These fruit were the same size, but greener in color, and less bumpy. 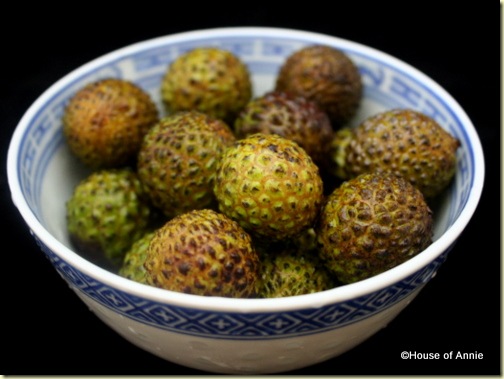 They also had considerably more meat on them, and were sweeter than the Serian variety. 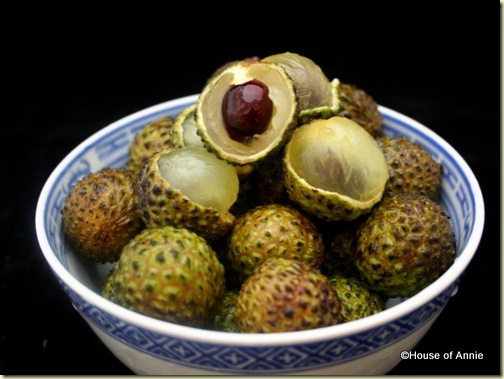 These we finished eating in one sitting! 😉

This post was entered into the Weekend Herb Blogging roundup, hosted this week by Mele Cotte and organized by Haalo of Cook Almost Anything.