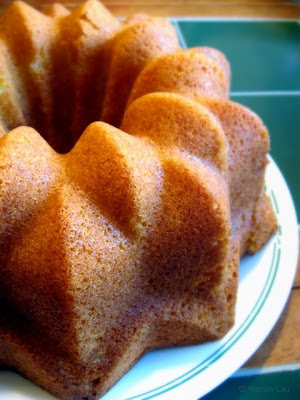 The first cake I ever baked was so bad that I have erased detailed memories of it. What I do remember is my friends laughing because when they bit into it, they could bite into the sugar in the cake (I had not creamed it enough). Suffice to say, it was not my best effort.
END_OF_DOCUMENT_TOKEN_TO_BE_REPLACED

Annie was preparing food for a friend’s brunch party (she always gets asked to do food for gatherings here and there — birthdays, showers, meetings, etc). Since I did so well making crepes last time, she asked me to do them again.
END_OF_DOCUMENT_TOKEN_TO_BE_REPLACED

Crepes weren’t a big thing for me back when I was growing up in Hawaii. Batter-based breakfasts were usually in the form of waffles, muffins or pancakes – rather bready. Nowadays, I can’t take too much of those dense kinds of foods. Thankfully, crepes are a nice alternative.

Using the “Chantilly Crepes” recipe from Rose Levy Berenbaum’s cookbook “The Cake Bible”, I whipped up a big batch of batter then set to work with the crepe pan. I couldn’t help but notice the browning patterns on the cooking crepe. They kind of remind me of a Mandelbrot set — pretty cool 😉 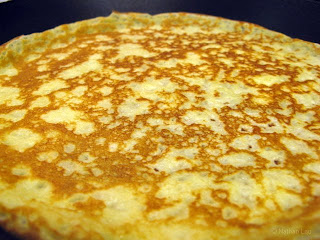 I made a pile of crepes for a brunch party the next day. 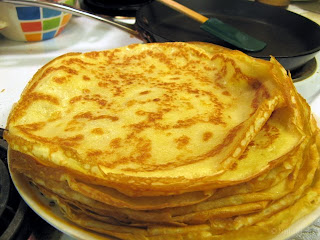 Spread with Nutella, sliced up half a banana, and topped it off with a few dollops of fresh whipped cream. Yum! 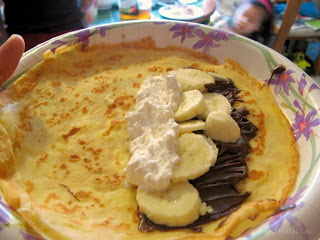 I like crepes because they’re so versatile. You can put all kinds of jams and fruits on top. Annie’s mum likes them with fresh squeezed orange juice and a little sprinkle of sugar. You can even put savory stuff inside…the sky’s the limit!

We’re lucky to have a good, artisanal bakery in the Bay Area known as Acme Breads. We bought (and devoured) a few loaves from their stall at the San Francisco Ferry Building Farmer’s Market. Recently, they debuted a cranberry-walnut whole-wheat bread that was divine. Annie tasted some during a trip to Lunardi’s and immediately placed an order for a boule.

A few days later, when that boule was but a happy memory, she decided to make her own cranberry-walnut bread, based on the “Cranberry-Walnut Celebration Bread” recipe in “The Bread Baker’s Apprentice”.

Though the recipe called for 3 cups of white flour, she substituted one cup of whole wheat flour and added some vital wheat gluten. She also added some golden raisins to the mix.

Here is the bread at the first rise after kneading. 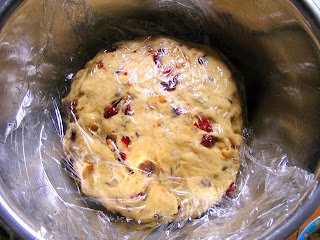 She skipped the braiding part and just baked the dough as loaves in two bread pans. Here is the final result. 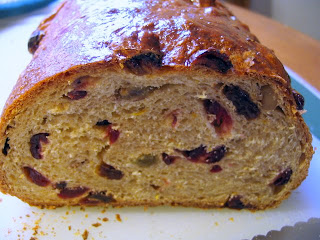 The loaf lasted just about as long as the Acme bread.