Saturday morning. Time for sleeping in and lazing around. Time for me (Nate) to make breakfast.

We had some white button mushrooms and some nice gruyere cheese in the fridge. I sliced up the mushrooms and sauteed them in bacon fat. Seasoned with salt, cracked black pepper, a little Italian seasoning, and a touch of soy sauce. Fried them until they got a nice golden brown color.

In the meantime, I grated up some gruyere cheese and also cut up some mozzarella cheese into small chunks. Just as the mushrooms were finishing, I started the omelettes. As soon as the egg began to set, I put on the mushrooms, topped with the cheese, and folded.

Plated it up, garnished with chopped parsley, and added a few dashes of hot sauce. This was very good! 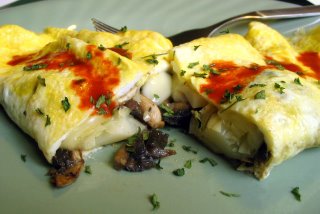 Annie came out and said she wanted to try using the flour tortillas that we normally use to make quesadillas, and add bananas and Nutella. Kind of a banana-Nutella crepe but using tortillas instead of crepe. 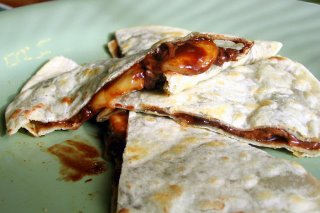 It was…interesting. Oh well. You make some, you break some.

Annie made this absolutely delicious meal with less than an hour of prep. She took a whole chicken and rubbed it with kosher salt and let it sit in the fridge for about 6 hours. Ground some pepper and sprinkled a little sugar on the skin before putting it in the oven. Roasted at 450*F for 30 minutes breast-side down, then flipped and roast for another 20 minutes.

The sauce started with sauteeing chopped garlic and artichoke hearts in olive oil. Then added a mixture of chicken stock, lemon juice, and vermouth. Added defatted pan drippings from the chicken. Simmered to reduce.

Cut up some carrots, broccoli, and cauliflower, then tossed with some olive oil, salt, fresh cracked black pepper, and Italian seasoning. Spread out on a foiled baking sheet and roasted with the chicken for the last 20 minutes. Boiled some russet potatoes until fork tender and then drained, then mashed with salt, white pepper, heavy cream and granulated garlic.

The chicken skin was nice and crispy from the sugar. The meat (including the breast) was juicy and tasty all the way through. Definite do-over! 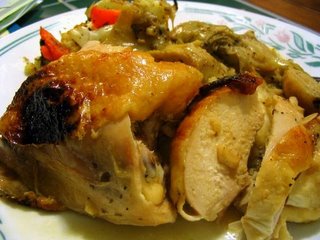 This is a much maligned dish which is often served but hardly touched at a lot of Thanksgiving meals. The classic recipe calls for canned or frozen beans, cans of cream of mushroom soup, and a can of fried onions. Ugh. No wonder no one wants to eat it.

I felt challenged to make a green bean casserole that people would actually want to eat. USA Today had a recipe adopted from America’s Test Kitchen:

Method
1. For the topping: Pulse bread, butter, salt and pepper in food processor until mixture resembles coarse crumbs, about 10 one-second pulses. Transfer to large bowl and toss with onions; set aside.

3. Add butter to now-empty Dutch oven and melt over medium-high heat until foaming subsides. Add mushrooms, garlic, 3/4 teaspoon salt and 1/8 teaspoon pepper; cook until mushrooms release moisture and liquid evaporates, about 6 minutes. Add flour and cook for 1 minute, stirring constantly. Stir in broth and bring to simmer, stirring constantly. Add cream, reduce heat to medium and simmer until sauce is thickened and reduced to 3 1/2 cups, about 12 minutes. Season with salt and pepper to taste.

4. Add green beans to sauce and stir until evenly coated. Arrange in even layer in 3-quart (or 13-by-9-inch) baking dish. Sprinkle with topping and bake until top is golden brown and sauce is bubbling around edges, about 15 minutes. Serve immediately.

Instead of fried onions, I took a cue from Tyler Florence’s Food 911 recipe and added grated Parmesan, thyme, and rosemary to the breadcrumbs. I also used half white and half crimini mushrooms.

In this photo, about 1/3 of the casserole is left, with most of the guests having seconds and thirds. I’d call that a success! 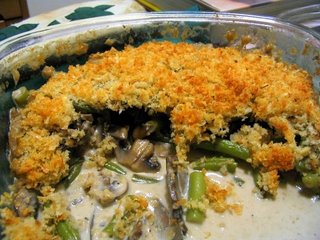 I think the beans can be blanched for less time to keep them crispy. Next time I want to see if I can cut the fat by using half and half instead of full cream, using gravy in the sauce, add some chopped turkey to the beans, topping the beans with stuffing before adding the breadcrumbs. Of course, this means that the casserole comes after Turkey Day… 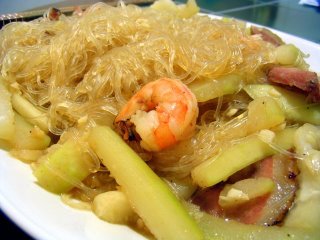