Try this simple and delicious recipe with healthy black (wood ear) fungus, and you’ll be sold on it too! 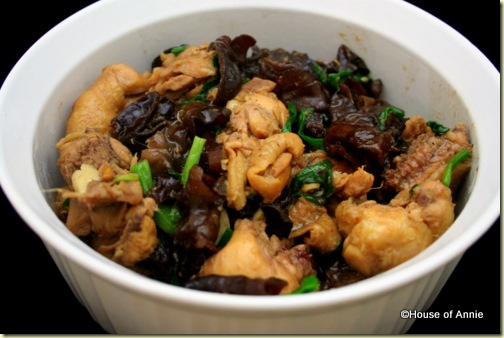 Have I told you that I’m a pretty easy sell? I totally believe in sales gimmicks and this is why I never let those Kirby people in unless Nate is there at home with me. If I was alone, I’d be the proud owner of a really expensive vacuum cleaner (and I hate vacuuming). Why do I even let them in? Because I’m pake, see, and they always offer to clean one room for free! ^_^

I was at the market the other day buying vegetables and the vendor lifted this packet of black fungus to me. At first I didn’t know what it was she was trying to sell me but once I understood, I was tempted to get it. It’s not often that I can find fresh black fungus here.

Turns out, this vegetable vendor was a pretty good salesperson. “It’s very good for your health,” she said, “and it’s my last big pack.” She went on to convince me that it was really tasty and I would enjoy it. She could see that I was sold before I even nodded and, with a big grin, added it to my bag of other vegetables. Thankfully, in this case, it was just a pack of wood ear fungus that make for delicious eating and thus, totally justifiable. Right honey?

So I came home that day with the black fungus and some cut-up chicken quarter pieces from the market. I didn’t really have an idea of how to cook this dish but I decided I was going to try to wing it. I knew that I wanted the chicken flavor to be prominent and the black fungus to be the main textural counterpoint. 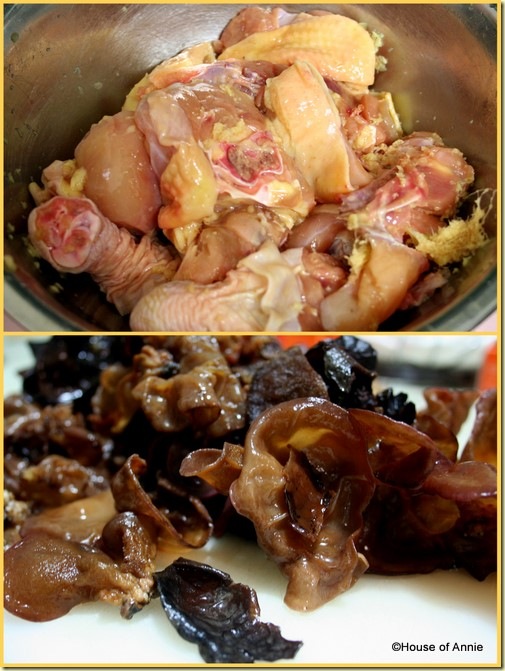 After the prep was done (including some pounded whole garlic and some sliced green onions), I was ready to go. It couldn’t have been simpler. A quick stirfry of garlic, then chicken, and once the chicken had browned a little, throw in the black fungus and some chinese red rice wine (or any chinese rice wine). Cover and let that all simmer for a bit until chicken is cooked through, then toss in the green onions and give those a quick toss and your dish is done. Simple huh?

Ingredients
2 Tbsp vegetable oil
4-5 cloves of whole garlic, lightly smashed
3 chicken quarters cut into 5-6 pieces each (get your butcher to do it for you if you can to avoid splinters)
1 fat thumb of ginger, grated and juice squeezed out
3-4 green onions, cut into 1 inch pieces
1/3 to 1/2 cup Chinese wine (red if you have it)
kosher salt and white pepper, to taste

Method:
1. Put ginger juice and grated ginger and about 1 tsp salt in with the chopped up chicken pieces in a bowl and marinate ensuring that all the chicken pieces are coated with the ginger.
2. Prep your black fungus by removing the root portion of the fungus and cutting the rest into bite sized pieces (about 1-1.5 inch pieces). Set aside.
1. Put wok over high heat until wok is hot. Add vegetable oil and let it heat up till shimmering.
2. Add in whole garlic cloves and toss around in oil till lightly browned, being careful not to let it burn. Turn heat down if garlic browns too quickly.
3. Add chicken pieces to wok along with all the accumulated juices in the bowl. Turn heat up to high and let chicken pieces brown in the wok turning every 2-3 minutes or so.
4. Once the chicken pieces have been lightly browned, about 10 minutes, add black fungus and toss to mix. 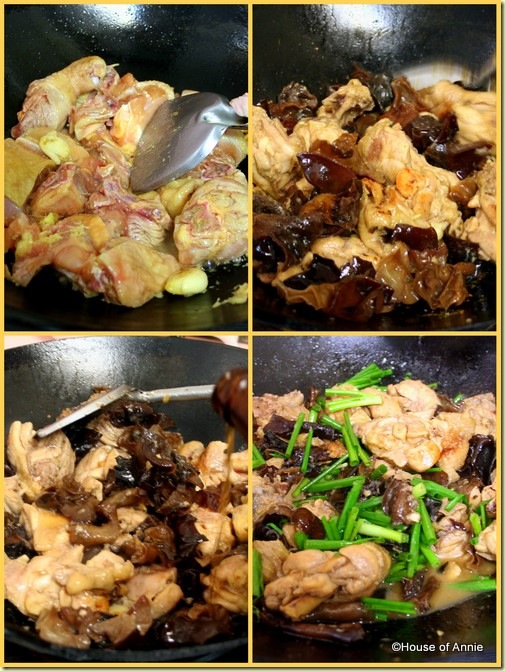 5. Add Chinese red wine and toss again to coat. Once mixture starts to boil, turn heat down to medium low, and cover. Simmer for another 6-8 minutes, or until chicken is cooked through.
6. Add white pepper and salt to taste. Toss in green onions and stir for another minute.

Plate up and enjoy!

And not only was it simple to make, it was delicious. The red wine and ginger really worked well with the chicken and the black fungus was crunchy and had picked up some nice salty flavors from the chicken and seasonings. We had that with some rice and a side of stirfry vegetables.

It was a complete meal and so simple for a weekday. Give it a try next time you see fresh black fungus at your market (I know I’ve seen fresh ones at the 99 Ranch markets in San Jose).

I am entering this post into this week’s edition of Weekend Herb Blogging, hosted and organized by Haalo.

6 thoughts on “Chicken with Black Fungus”