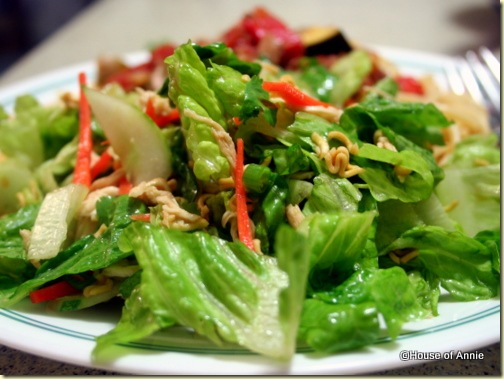 The Chinese in Asia typically don’t eat raw-leaf lettuce salads. They prefer their greens cooked. Chinese chicken salad as we know it was probably invented in California as a “fusion” of Oriental flavors with Western ingredients.

There may be 3 main ingredients to a Chinese chicken salad, but they’re not always the same from recipe to recipe. Iceberg lettuce is the standard, but we prefer Romaine lettuce whenever we make ours. We’ve also found that mixing in some shredded won bok (napa) cabbage is a nice addition. You can use softer lettuces such as red leaf but they tend to wilt faster.

The crispy fried noodles are typically made from rice or bean thread noodles. But sometimes we’ve used fried won ton strips or even fried wheat noodles. In a pinch, you can just crumble up a packet of Top Ramen noodles and toss those in! 😉 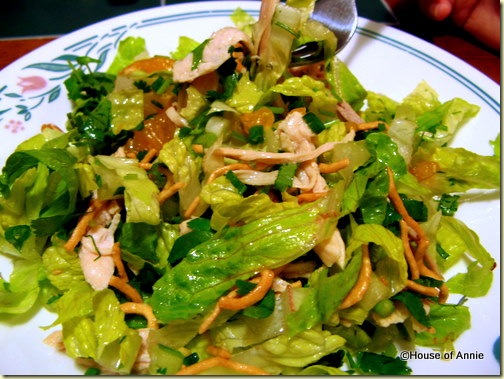 As for the chicken, most of the time we use boiled chicken breasts for the salad. Sometimes if we’re lazy, we’ll shred up some rotisserie chicken that we got from Costco. Of course, you could use some other poultry in place of the chicken like duck or turkey, but I wouldn’t go too far astray there! After all, it is called Chinese chicken salad. 🙂

Beyond the main ingredients, you can add many other things to the Chinese chicken salad to keep it interesting:

The sky’s the limit! What are some things that you like in your Chinese chicken salad? 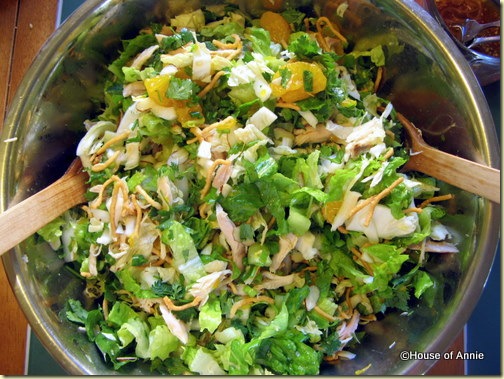 The thing that ties this whole Chinese chicken salad together is the dressing. It’s got to have sesame oil in it. To balance it, you can use white vinegar, but we prefer to use Japanese rice vinegar. Annie has a dressing recipe that we really like:

Put it in a jar, cover with the lid and shake it up to mix. Dress the salad right before serving. Use just enough to coat the leaves – you don’t want to drown the salad. 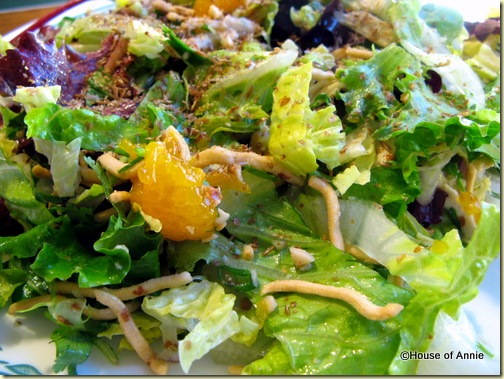