Ever since Annie went to the United States to study 13 years ago, she hasn’t been back home for Chinese New Year. Sure, we’ve come back to Malaysia several times to visit, but never during this season which is the most important holiday celebrated by her family. So when we moved to East Malaysia and settled in Sarawak, one of the first things we did was book tickets to KL so we could spend this festive time reuniting with her family in KL and Penang.

Annie’s extended family on her father’s side are from Penang. When I say “extended family”, I mean EXTENDED. Her dad has many brothers and sisters, plus all the other cousins and relatives by marriage. It was said that you couldn’t throw a stone in Penang without hitting a relative. I was looking forward to the excitement of the family reunion.

And, of course, I was looking forward to the food.

Crossing Over the Bridge to Georgetown, Penang 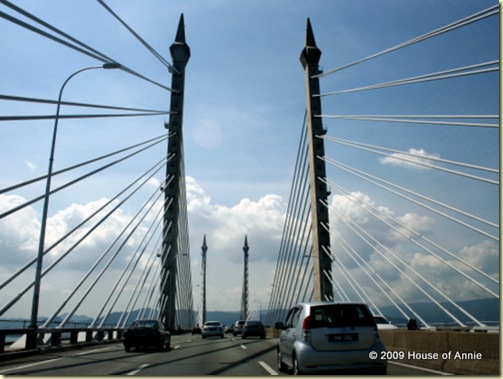 It was a 4 hour-long drive up from KL. We had stopped at a rest stop along the way for some mediocre hawker fare. By the time we got to Annie’s uncle’s house (where we would be staying the next few days), we were exhausted.

But we had barely a chance to unload our car, wash up and settle down before Uncle announced, "come, you want to go eat?"

Well, how could we refuse? ;-d

Since it was Chinese New Year, most of the hawker stalls that Penang is famous for were closed. All the proprietors had gone home to prepare their own family feasts and functions. Uncle took us to Cafe Bali Bali, a kopitiam (coffeeshop) nearby that he frequents.

He ordered a Hokkien Prawn Mee (a soup noodle dish, completely different from the KL-style Hokkien Char Mee) for me, plus a Char Kway Teow to share and a couple of Assam Laksa to ta pau (take home). The prawn mee was okay only; the broth did not pack a good enough porky-shrimpy flavor punch for me. 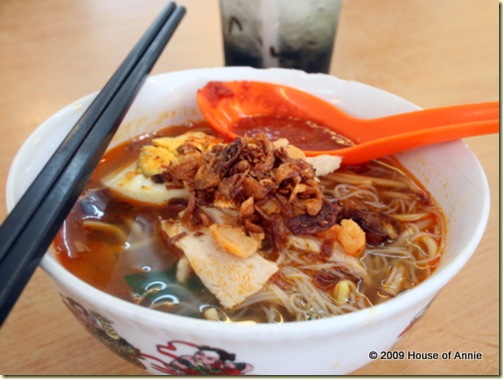 That night, we went out again to meet up with another Uncle and his family for dinner. We ended up at another kopitiam across the road from this Uncle’s house. I wound up getting a Klang-style bak kut teh (literally “pork bone tea”) which was decent. After I finished that, Auntie asked if I was interested in some Or Chien (oyster omelet).

Fresh oysters, wok-fried with beaten eggs and tapioca starch, then served with some chili sauce on the side? “Sure!” 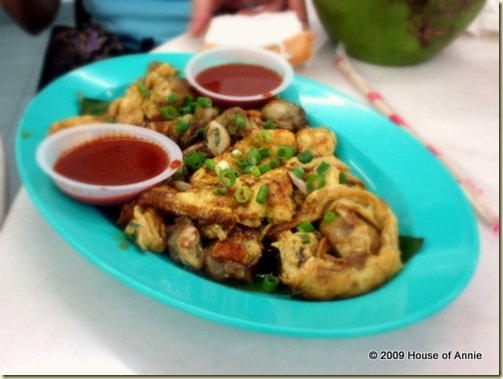 The next day was actually the eve of Chinese New Year. Almost all the immediate relatives in Penang would be here to have the first reunion dinner. Annie’s Mum and Aunty were busy all day in the kitchen, cooking.

One by one, dishes appeared on serving platters: a chicken dish, a prawn dish, a pork dish, a vegetarian dish…it was going to be quite a feast! Towards the end of the afternoon, Uncle went out to his favorite Nasi Kandar restaurant and came back with a big pot of Indian fish curry.

We were among the first to eat, before the crowd arrived. I have to say, this fish curry was really good! The sweetness of the onions, the savoriness of the curry, and the spiciness of the chili were combined into a wonderful balance of flavors. 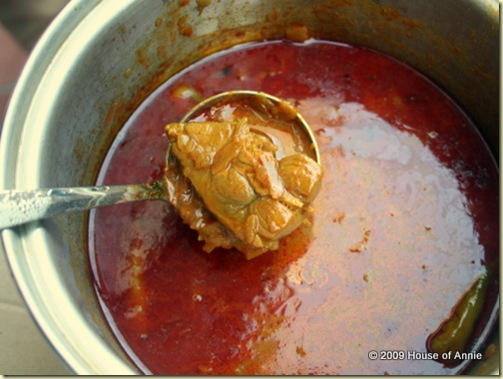 The times, they are a changin’.

Perhaps it’s because the economy is better, or airfares are cheaper. Or it could be that hanging around family is not as fun as it used to be when everyone was younger. In any case, there weren’t as many relatives at the reunion dinner this year, compared to previous times we’ve been back to Penang. A few of the families were actually traveling overseas for the holiday instead of gathering at home.

Those that did come, though, got to participate in a Chinese New Year “tradition” that was invented here in Malaya back in the 60’s. “Yee Sang” (or “Yusheng” depending on your dialect) literally means “raw fish” but sounds like the words for “increasing abundance”. It is made with strips of several different kinds of vegetables, plus crispy noodles, raw fish, ground peanuts, and a highly sweet, sticky sauce. 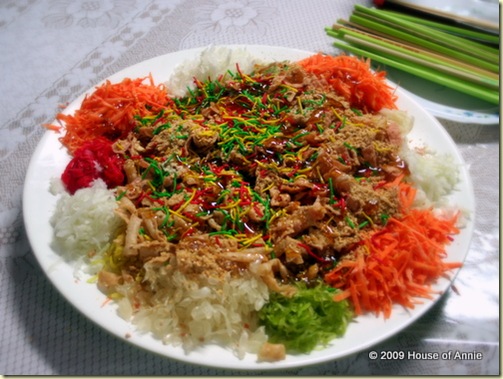 The idea is to have everyone grab a pair of chopsticks, gather ‘round the platter, and toss the whole mixture together in unison. 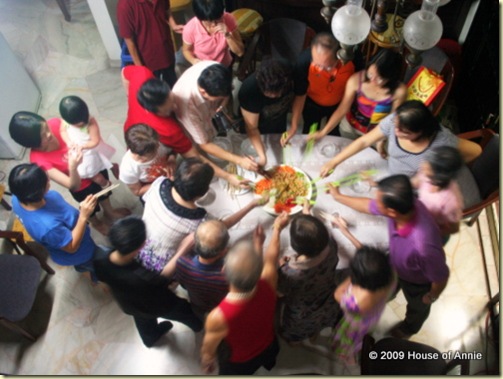 At the same time, they call out blessings and good wishes for the new year. Supposedly, the higher the toss, the greater the blessing. Everyone gets in on the fun and starts calling out things like, “good health” or “win the lottery” (for the older folks) and “find a boyfriend” or “get married next year” (for the single folks). 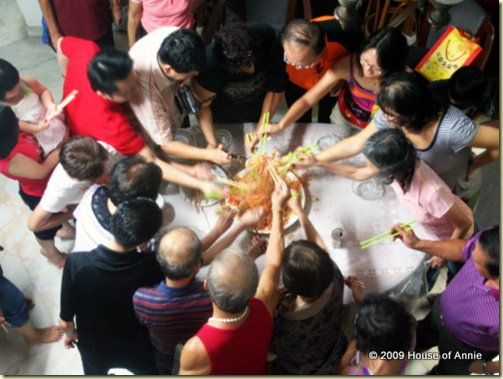 As with large families, sometimes things can get messy. Like a just-mixed platter of yee sang.

Yee Sang – All Mixed Up 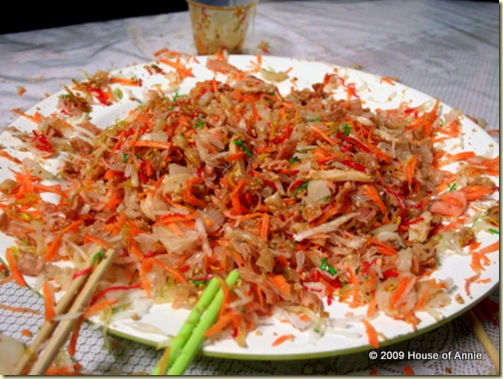 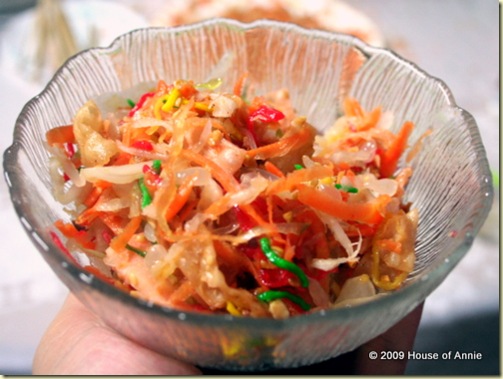 The next day, the family all gathered together again for the traditional First Day vegetarian meal. Even then, things weren’t so harmonious. We had to discipline a tantrum-throwing Esther, who wouldn’t stop crying for some absurd reason (crying is a big no-no on the First Day).

Eventually, we all settled down and tucked in to the meal. It was a very tasty, Chinese vegetarian meal full of mock meats and tofu cooked in a variety of ways.

Afterward, we all gathered in the hall to take a family picture. 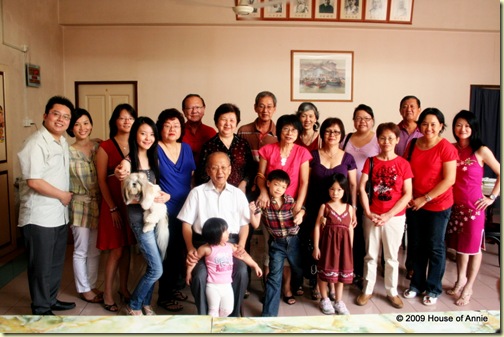 Aunties, Uncles, cousins and grandkids, all tossed together and mixed up like a platter of yee sang. It may not be pretty, but it’s family.