Have you ever eaten Sanddabs before? 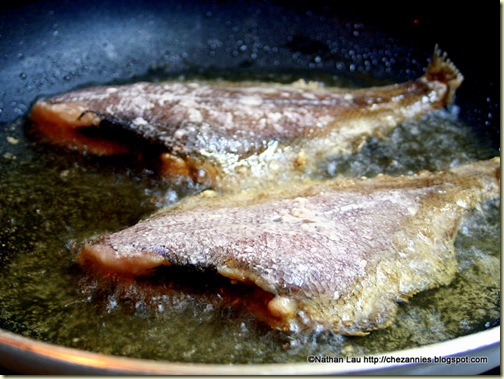 Not me.  I have a vague recollection of seeing them on a menu somewhere or maybe several different somewheres. But I assumed they were similar to sand dollars, and therefore had no interest in eating flat sea urchins.

Actually, sanddabs are small flatfish, in the same family as flounders and halibut. But sanddabs are tiny compared to those fish.  In the market, they are sold between 4 and 12 ounces each.

During a recent visit with our favorite farmer’s market fishmonger, Pat from Mission Fresh Fish, he had these sanddabs for sale. They were already scaled, gutted, and had the heads removed.  He said the sanddabs were the best tasting fish out of that day’s selection, and recommended them to us.  We originally had our eyes on the halibut but his expert recommendation swayed us.

We picked up a large bag full of them for about $4 per pound.  After we brought the sanddabs home, we washed them and divvied them up into equal lots, one lot to cook and the rest to freeze for later.

As Mum was dividing up the sanddabs, she kept clucking approvingly, proclaiming that these were good fish. Indeed, they were lovely. Caught fresh, the flesh was still springy and smelled of the ocean.  She was getting excited to cook them.

1. Pour enough vegetable oil into a large frying pan to just cover the bottom. Turn the heat on to medium-high.
2. Coat the sanddabs on both sides with a little bit of cornstarch.
3. When the surface of the oil shimmers, lay the sanddabs down. Be careful not to crowd the pan.
4. Fry the sanddabs until the bottom is golden brown, about 4 minutes.  Flip over and fry the other side until golden.
5. Remove sanddabs from the frying pan and lay them on a plate with paper towels to drain. Continue to fry the remaining fish
6. Pour off most of the frying oil, leaving approximately 1 tablespoon in the pan.  Return the pan to the heat, lowering it to medium.
7. In a small bowl, mix the oyster sauce, sugar and water, and stir to combine.
8. Stir-fry the chopped garlic in the oil until fragrant, about 1 minute.
9. Pour in the oyster sauce mixture and cook it until it starts to thicken, about another minute.
10. Move the drained sanddabs to a platter and pour the garlic and oyster sauce over the fish. 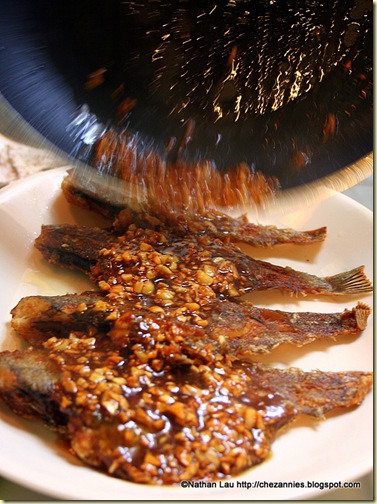 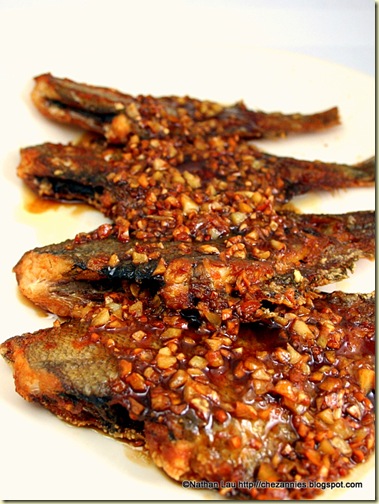 These sanddabs were the bomb!  The flesh was sweet, soft, and moist.  It flaked easily and cleanly off the bone with the push of the fork.  We ate it over rice and it was wonderful.  I had to restrain myself from taking a second sanddab!

So, if you ever see fresh sanddabs in the market, I encourage you to pick them up.  You’ll be glad you did!

11 thoughts on “Fried Sanddabs with Garlic and Oyster Sauce”