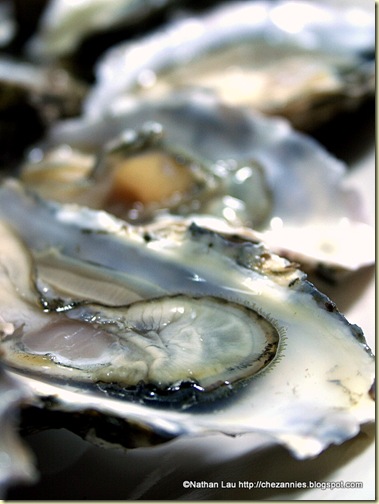 Steamed oysters. Deep fried oysters. Grilled oysters. Oyster Po-Boys…there are many ways to eat oysters. (Have you had the Hokkien-style Or Chien – Fried Oyster Omelette? So good!)

But I think my favorite way to eat oysters is to eat them raw. That combination of smooth, silky texture, sweet oyster meat, and briny oyster liquor is irresistible. There is nothing like it.

Still, we don’t get to eat raw oysters that often. Yes, I know there are places around here in the South Bay that sell raw oysters. We’ve even tried the vendor at the Sunnyvale farmer’s market. (Never again – Annie and I both got sick from a bad batch.) The place we prefer to get our fresh oysters from is Hog Island Oysters at the San Francisco Ferry Building.

September Has the Letter ‘R’

On a recent trip up to San Francisco to have some Roli Roti Porchetta with Robyn (of the EatingAsia food blog), we made it a point to stop at the Hog Island Oyster stall at the Ferry Building farmer’s market. Actually, our 6-year old, Daniel, made it a point to remind us to get some oysters. You see, Daniel has learned to love oysters as much as we do.

We had told Daniel that oysters wouldn’t be available in months that don’t have the letter ‘R’ (which is a myth, by the way – oysters are now available year-round thanks to commercial farming and refrigeration). Back in August, Daniel came to me and said, “Daddy, September has the letter ‘R’. That means we can go to San Francisco!”

I knew exactly what he was getting at.

So, after gorging on Roli Roti’s perfect roast pork (that’s for another post!), we ambled down to the Hog Island Oyster stall to pick up some fresh oysters to bring back home with us. 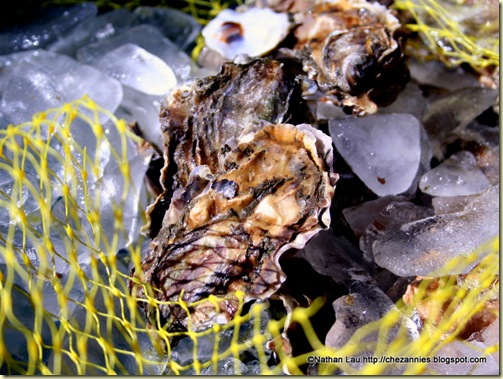 We came away with a dozen Sweetwaters and a dozen Kumamotos. Before leaving, we made sure to get a lesson on how to shuck an oyster from the expert shucker himself:

How to Shuck an Oyster

We took the oysters home and put them on ice in the fridge until it was time for dinner. Annie and I practiced our shucking skills (we still need work!) until we had filled the plate with oysters on the half shell. 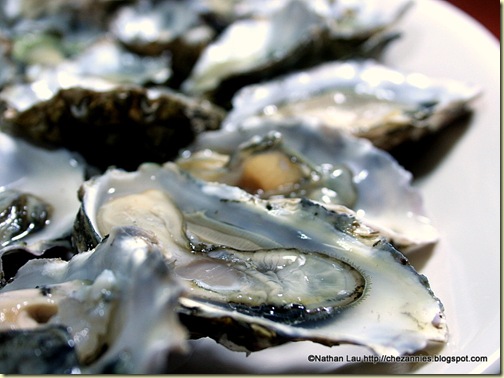 No need for any dressing on these oysters. Even the squirts of lemon juice weren’t necessary. Just toss these bad boys back and enjoy the goodness.