We arrived in Malaysia a few days ago from California and are currently staying in PJ (Petaling Jaya, a suburb of KL), Annie’s hometown. We have slowly been getting over the jet lag as well as getting used to the humidity. We’ve also been getting reacquainted with her family and friends.

One of those friends is Annie’s mentor Dr G, who had a big hand in helping Annie get to Hawaii for her graduate studies. Dr G is a big foodie. She introduced Annie to French food as well as sushi, and always has recommendations for any type of food you’d want to eat in Malaysia. On our last trip to Malaysia, Dr G took us for a huge seafood meal out in Kuala Selangor. This time, she wanted to take us on an excursion to a restaurant in Ijok which was famous for beggar’s delights.

What Are Beggar’s Delights Anyway? 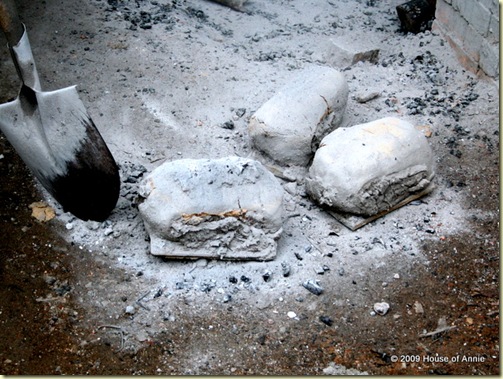 Basically speaking, beggar’s delights are different meats that have been wrapped and sealed in a clay vessel, then baked in an oven. Chinese legend has it that a beggar stole a chicken but before he could eat it, he hid it from some passing guards in some mud. Not having any cooking utensils, he tossed the whole thing in the fire he had built.

When he pulled the chicken out of the fire, he found that the mud had formed a hard clay crust. After breaking open the crust, he discovered that the feathers came off along with the clay, and what he was left with was a deliciously cooked chicken. Thus originated this classic Chinese cooking technique called Beggar’s Chicken.

Get Out of Town

Ijok ("EE-joke") is a small town about 35 km northwest of PJ. It was quite refreshing to get out of the concrete jungle and crowded roads. As we drove out of the city, condominiums, malls and shoplots gave way to acres and acres of palm plantations, as far as the eye can see. Just before hitting Ijok town proper, we made a left turn at the sign at the intersection of Jalan Harmoni 2 and the main road. 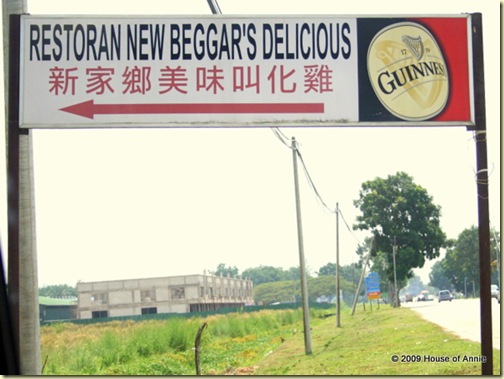 Jalan Harmoni 2 is a lonely road, but after hanging a right, we came upon this restaurant compound: 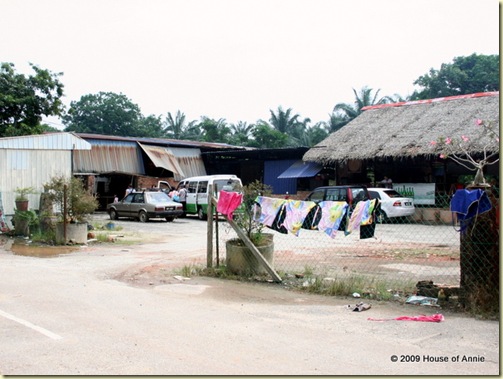 Under the corrugated tin roof, the layout is like a typical Malaysian open air restaurant: many round tables surrounded by red plastic chairs, fluorescent shop lights, and ceiling fans turned up high to provide a breeze. Sparse and utilitarian, with not much attention to decor besides red Chinese lanterns and hanging weaver swallow nests. Your focus is on your food and friends at the table. 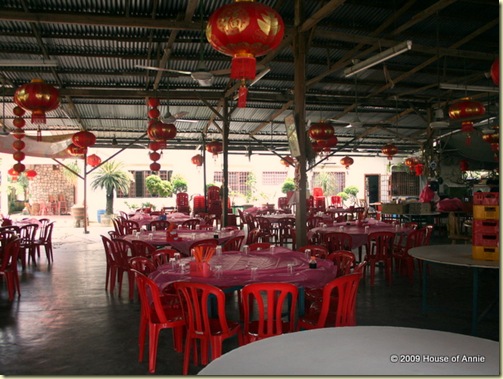 We had arrived at 12:30, a bit earlier than the normal 1 pm restaurant opening. The restaurant opens so late because the beggar’s delights don’t finish cooking until then.

Can we eat it all?

Our party was only 7 adults and 2 kids. A normal set meal is for 10 people. The waitress was concerned that we didn’t have enough people to eat all the food that was coming. She suggested we just order less dishes ala carte, but that would have come out to roughly the same price. "Give us the set," we said, "and whatever we don’t finish we’ll ta pau (box up to take home)."

Being a nosy American, I asked if we could see the ovens where the food was cooking. At first, the waitress said there was nothing to see. But we prevailed upon her and so three young boys (presumably the owner’s sons) led us past the kitchen and behind the restaurant.

The first things you see are stacks and stacks of rubber tree logs, which they use as fuel for their ovens. 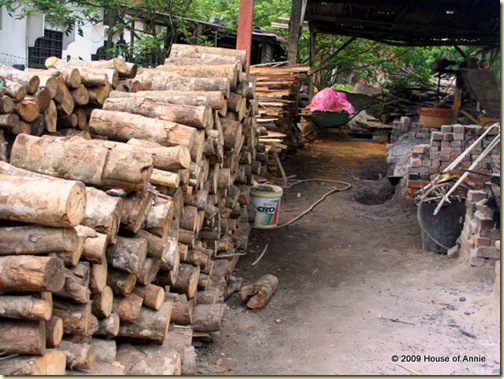 In between these two great piles of wood are the brick ovens. They are loosely built structures. The logs are burned to coals in the spaces between the low walls. A thick metal plate rests atop the walls. The beggar’s delights are laid on top of the metal plate, more bricks are stacked up like a dam, and old ashes and coal are poured over the beggar’s delights to bury them. At Restoran New Beggar’s Delicious, the delights cook in the hot ashes for six hours, starting from 7 in the morning all the way to 1 pm. 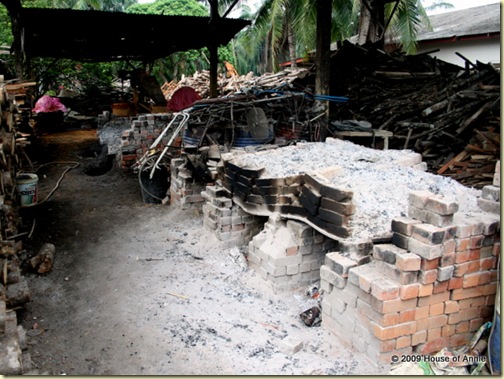 One of the boys took a long-handled shovel and began pulling down the brick dams. 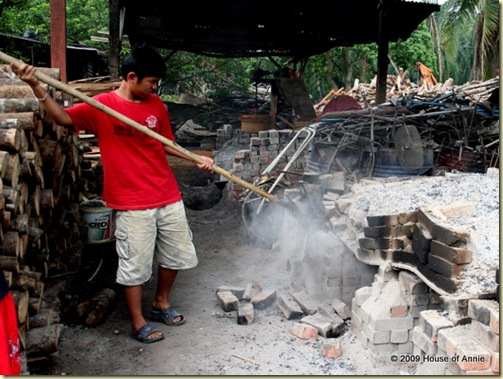 He then sunk his shovel into the pile of hot ash… 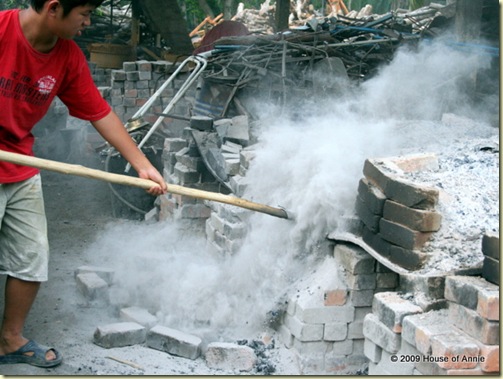 And lifted out one of the clay packages. 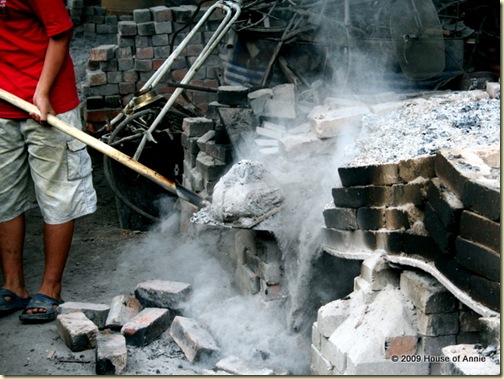 He repeated this two more times until we had three packages laying on the ground. Apparently, each packet is shaped slightly differently so they can tell what meat is in what packet. Can you see any differences? 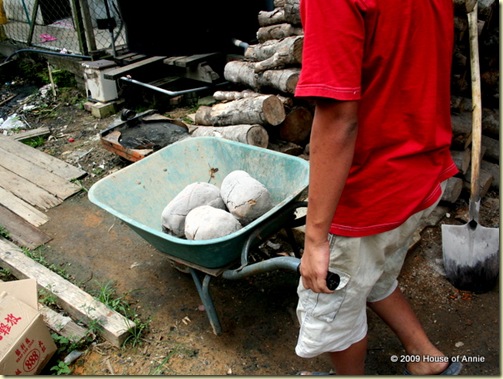 Where he deftly lifted them onto a wooden table and began the indelicate work of breaking through the clay shell and tearing through the paper wrapping. 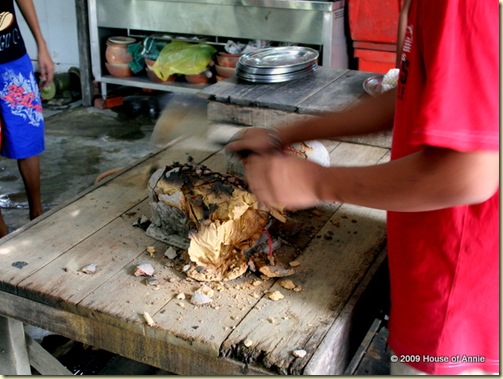 Inside each package is a foil pouch containing the braised delight. The delight goes onto a serving tray and then is brought to the table. 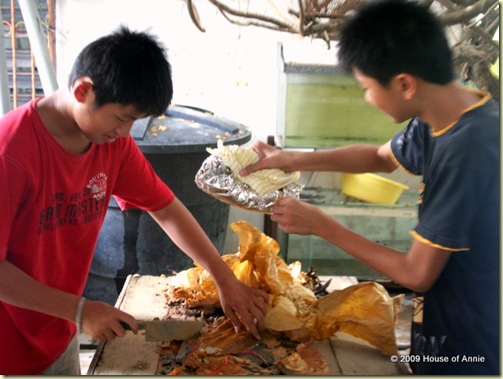 From the Beggar’s Oven

The first packet we opened was a pork shoulder and chunks of chinese taro (yam), whole garlic cloves, and shiitake mushroom halves. The meat fell clean off the bones. This isn’t like Southern-style pulled pork barbecue, though. Being sealed inside foil, paper and clay, no smoke flavoring is allowed to penetrate. But it is still good eats! 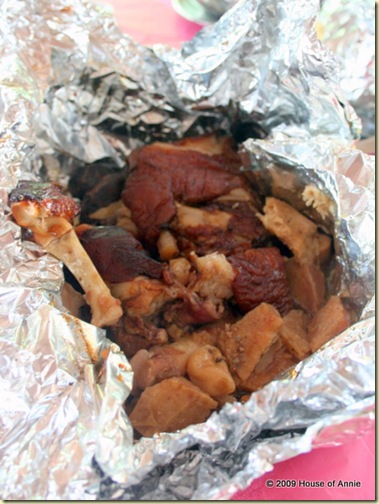 The beggar’s chicken was stuffed with Chinese herbs and swimming in a delicious broth. The chicken was lean and flavorful. 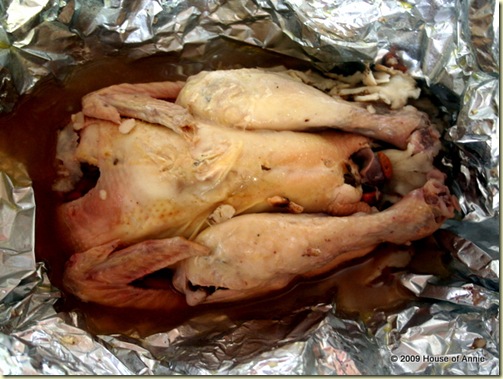 My favorite of the three was the beggar’s duck. It was melt-in-your-mouth tender, with a rich taste. Besides the herbs, there were also some abalone mushrooms cooked with it that was silky smooth and complementary to the duck. 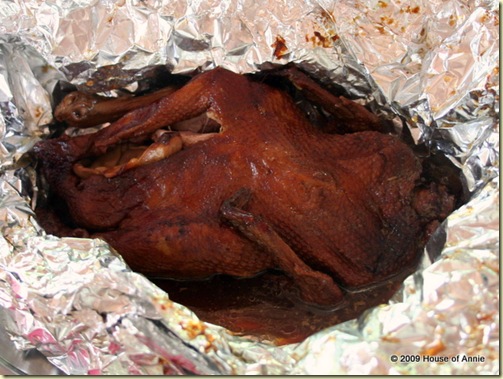 They also dropped off a packet of Loh Mai Fan, glutinous rice that has been cooked with oyster sauce, salted duck egg yolks, shiitake mushrooms, and pork. Dr G warned, "don’t fill up on the glutinous rice! You won’t have room for all the other dishes." 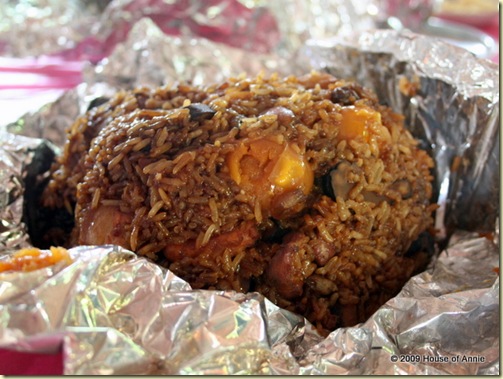 From the Restaurant’s Kitchen

We had just finished cleaning our plates of all the braised meats, when they started bringing out the other dishes that were part of the set meal. Here is a beautiful steamed fish, covered in fried garlic, shallot slices that had been marinated in lime juice, slivers of ginger and green onion. This was actually my favorite dish of the meal. The lime-marinated shallots had me craving for more. And the fish was very fresh–delicate and flaky with no hint of fishiness. 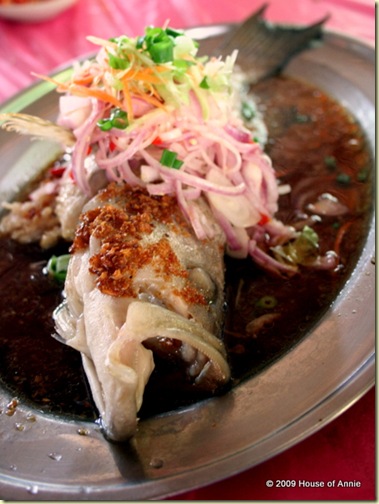 Next came this dish of fried whole prawns, covered in a sweet, sticky sauce. I’m guessing that the sauce is Marmite-based, but I can’t tell for sure. The weird thing about this dish is, I found bits of fried lard among the prawns. I love fried pork bits, but Dr G is allergic to pork, so she was concerned that she couldn’t eat this dish. 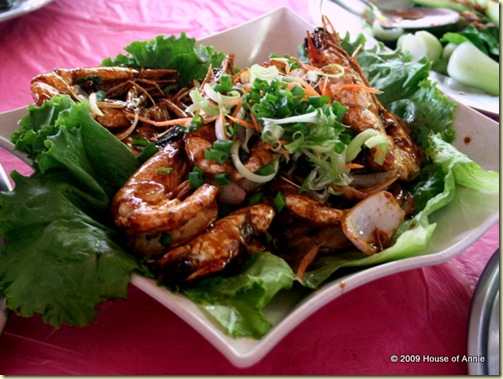 Next, they brought out a platter of mud crabs, fried with chillies, curry leaves, and lard bits again. What’s up with the lard bits and seafood? I didn’t quite care for this dish, as I much prefer eating Dungeness crab. 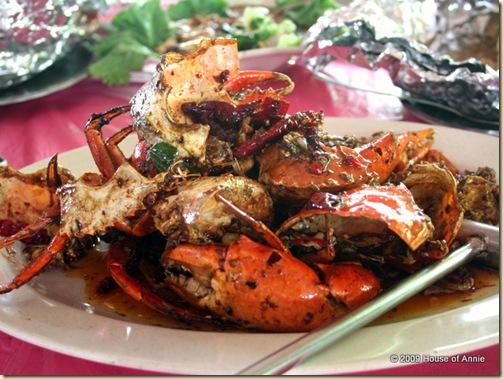 They also brought out a platter of stir-fried baby choy sum. One plate of veggies to go with all that preceding meat. I wish we had more veggies.

The final dish was this pork intestine soup. Normally, this soup is flavored with white pepper to mask the smell of the innards. But when I tasted the soup, I was struck by how overwhelming the white pepper taste was. I commented to Annie, "watch out. There’s a lot of white pepper in this soup."

"This soup is supposed to have lots of white pepper in it."

She tasted it. "Whoa! You’re right! I can’t taste anything else."

The soup was undrinkable to me. Sorry to say, this dish was ruined by the heavy pepper taste. 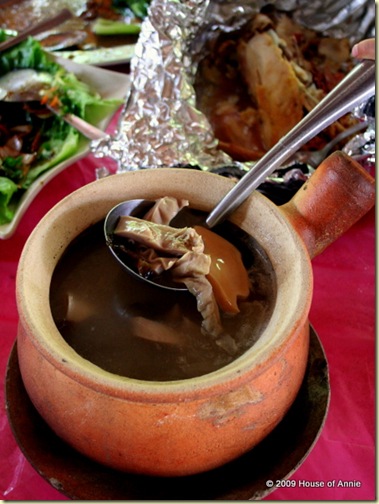 Our final dish was a plate of ice-cold jackfruit. These fruit were ripe, sweet, crunchy, and a fitting end to the feast. 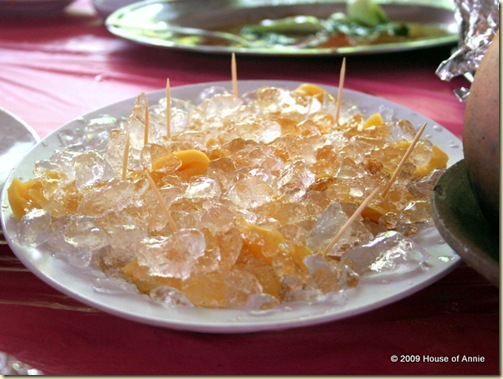 When it was all said and done, we had finished off everything except the undrinkable soup, half the loh mai fan and half the beggar’s chicken.

If you do go to Restoran New Beggar’s Delicious in Ijok, do go with a large group of people, and do call ahead to make a reservation. They only cook a certain number of beggar’s delights each day, and once they’re allocated, that’s it.

16 thoughts on “Foodie Excursion to Ijok for Beggar’s Delights”