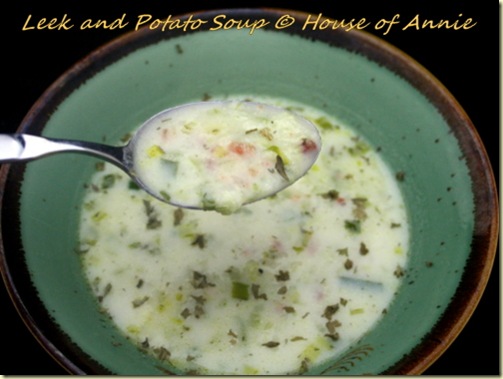 It’s only been in the past year or so that I’ve discovered leeks. Before that, I would use it if it was called for in a recipe, like the cioppino hot pot recipe, but otherwise, I did not know how to cook with it. But this past year, I visited the farmer’s market a lot more and tried to experiment a little bit more with unfamiliar ingredients.

Whenever I would see leeks on sale at the market, I would normally buy some and treat them like onions in several of my dishes, putting them in my quiches, soups or even in my stir-fries. But really, this humble soup is one of the most wonderful ways to showcase leeks.

Leeks at the Market 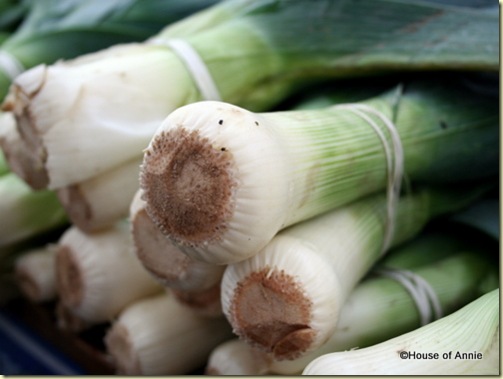 Leek and potato soup first came into my consciousness when I read the book “The $64 Tomato: How One Man Nearly Lost His Sanity, Spent a Fortune, and Endured an Existential Crisis in the Quest for the Perfect Garden”. I don’t remember much about what he wrote but somehow he made this soup sound really heartwarming and it stuck in my head as something I should try to make someday.

Well, I’ve made leek and potato soup several times now and recently while shopping at the market here in Kuching, I came across a vendor selling leeks. They weren’t as large as the ones I find in San Jose but they were definitely leeks – when I picked them up to give them a sniff, they smelled very pungent and aromatic. That decided it for me and I took home three to make this very soup.

Most recipes you come across will tell you to cut the leek at the point where the green parts meet the white base and use only the white base. Well, I find that in soups, you can get away with using more of the green leafy part and so for this batch, I trimmed only the top third of the leek and used the rest. I think it’s quite possible to use the whole leek if they’re not too fibrous. What do you think?

Another thing about leeks—you have to wash them good. And the only way to get to all the dirt trapped between the layers is to cut them in half length-wise and get in there with water to rinse out every layer. Once they’ve been washed of dirt, they are good to go.

Now back to this leek and potato soup recipe. This is a seriously EASY recipe and the flavor is really good. When I made this last week, the whole family devoured the soup including my picky kids. I’m going to have to try to make this soup much more often now seeing as to how easy it is and how much everyone likes it.

You basically need some leeks and potatoes (um, d’uh!), a little bit of garlic, some butter/olive oil, some chicken broth, milk, seasonings and you’re done. If you want the soup to be smooth, you can blend it with an immersion blender or in a regular blender. But if you don’t have a blender, just mash the potatoes up a little in the soup and you’ll still have a yummy soup, just chunkier.

This time around, I chose to add a little extra seasoning to my soup. Normally, just salt and pepper will do it but I have plenty of herbs and spices lying around and sometimes I like to try them in recipes to see what will happen. So I decided to toss some dill in and after tasting the soup, I thought it still needed a little kick so I thought, why not some Old Bay Seasoning? So I did. Put some in, I mean. And it was wonderful—the celery seed and spices in Old Bay gave the soup an extra oomph this round. I think I will be adding it in on a regular basis from now on.

So, if you’re busy and need a quick weekday dish, try this soup. It’s hearty so that on its own, it’s quite filling. Add a salad or some bread and you have a meal. Or you could roast or panfry some meats and have this soup as a side (this is what we did the last time, we pan fried some lamb chops which is also a quick weekday dish).

This recipe will serve 4 for a main course or 6 as a side.

Ingredients:
2 Tbsp butter or combination of butter and olive oil
2 cloves garlic, minced
2 large or 3 medium leeks, cut in half length-wise, washed and trimmed of the top third green parts, and sliced thin
2 large or 3 medium potatoes, diced small
4 cups low-sodium chicken broth or if you don’t have it, use 4 cups water with 1 1/2 cubes chicken bouillon (of course, home made chicken broth is best but that makes it less easy)
1 cup milk (whole milk is tastier but if you would prefer less fat, it’s fine to use low fat)
1/4 tsp kosher salt
1/2 tsp each freshly ground black pepper and white pepper
1 tsp Old Bay Seasoning
1 tsp dill (I used dried but feel free to use fresh, just add more to taste) 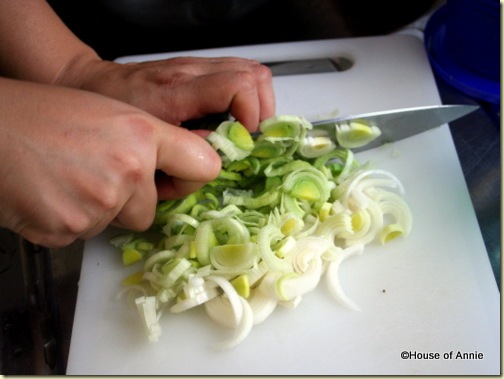 Method:
1. In your dutch oven or heavy bottomed pot, put in the butter/olive oil and heat till melted on medium heat.
2. Add garlic and stir for less than a minute being careful to not let it burn.
3. Add leeks and salt and stir around and cook till leeks have softened but not browned, about 5-6 minutes. 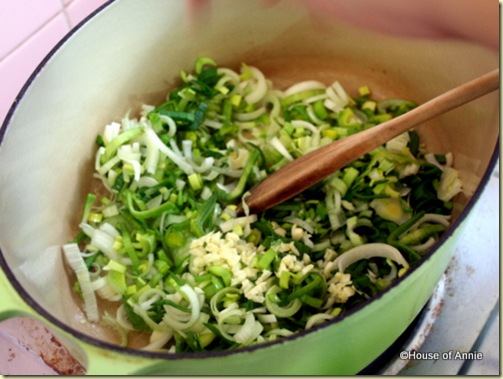 <
p>4. Add potatoes and chicken broth and give it a stir. Let that simmer for about 10-15 minutes or until potatoes are soft. 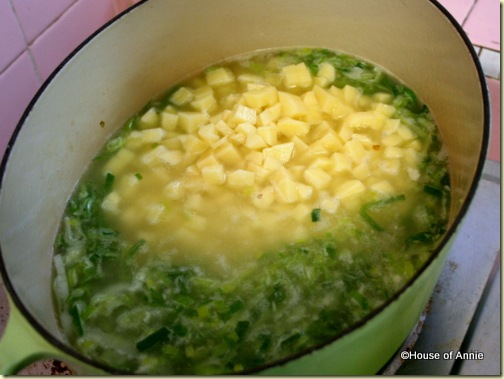 5. Add in your milk and then the rest of your seasonings—the peppers (don’t miss out on the pepper, they really add a lot to this dish), Old Bay and dill. Stir and let the flavors come together for another minute or two. Leave the soup at a gentle simmer at this stage.
6. Taste and adjust your seasonings accordingly.

Plate up and enjoy! We garnished with a little chopped parsley and some crumbled bacon. 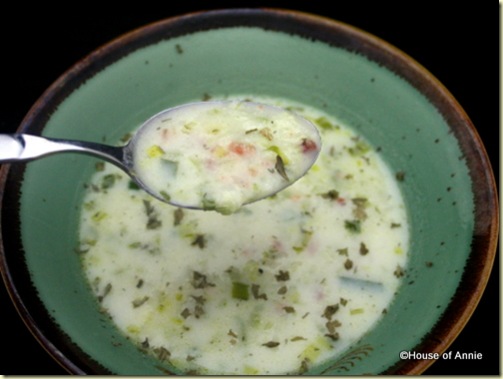 This post was entered in the Weekend Herb Blogging roundup #216, administered by Haalo and hosted this week by Maninas