Can heaven be found behind this little door on King Street in Honolulu? 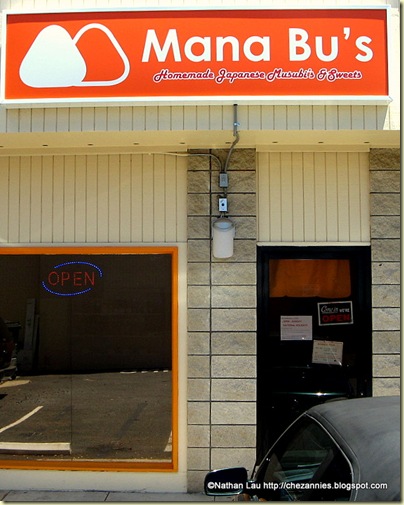 Keep reading to find out!

Whilst checking out different Hawaii foodbloggers to invite to dinner with us, I happened upon Pomai’s Tasty Island blog, which chronicles in beautiful detail her food finds from around the island. His post titled Musubi Mania at Mana Bu’s caused me to put this shop on my "to do" list of places to eat.

The store opens at 11 am and Pomai recommends going there at 11 to get the best selection, as the number of musubi are limited each day. But the first day we went, we were running late. We got in almost at closing time. Sure enough, the shelves were bare. We ended up getting some mediocre ramen for lunch instead.

The next time we went was on Friday, the day before we were to leave Hawaii. We had to fit our visit between the last swim at the beach in the morning (oh, it was HARD to get out of the water!) and 1:30 when we had to pick my mom up for a hair appointment. When we got there, the shelves were almost bare, but there were a few musubi left: 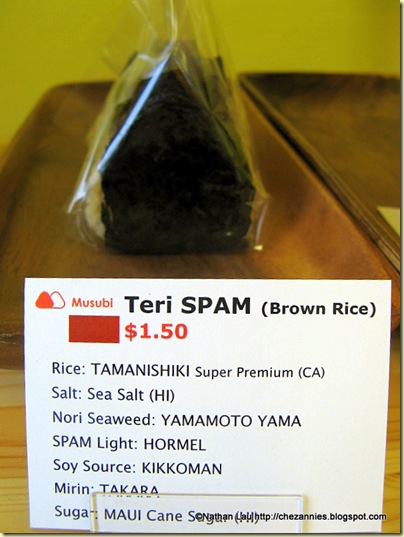 Notice that for each variety of musubi, there is a card which shows exactly what ingredients go into the food. Impressive, and reassuring at the same time.

Annie actually reached for the white rice Spam musubi first, but the shop’s owner Manabu-san recommended the brown rice musubi. The brown rice’s nutty flavor complements the Spam better, he explained. He said that it was very hard to make musubis with brown rice but cooking the rice with the right amount of water allows it to hold together. 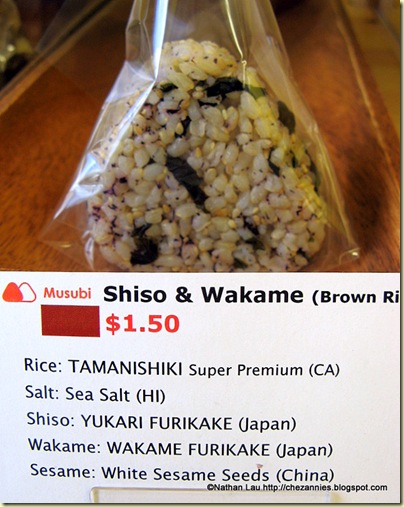 We bought a bunch of different musubi and hurried off to pick up my mom. We hadn’t had lunch and all of us were starving so we opened up the musubi to eat in the car.

I take back what I said about brown rice not belonging in musubi. The rice was perfectly cooked, still having brown rice texture with every grain intact and yet just sticky enough to hold the musubi together. That teri Spam was also perfectly done, not greasy or burnt, and the sweet teriyaki glaze was well balanced. Boy are we glad that we went with Manabu-san’s recommendation! He was spot-on.

This is all that I got after the kids and Annie had their tastes. (Daniel had eaten the salmon musubi all by himself.) 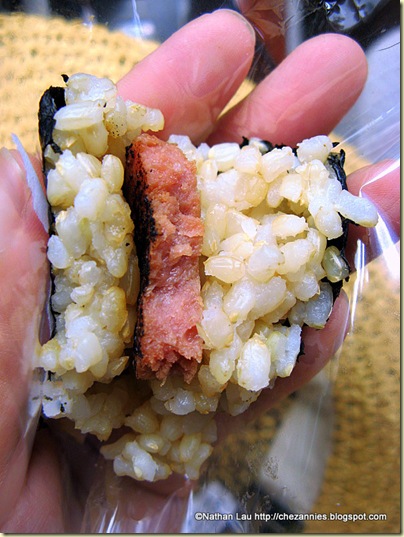 After the Spam musubi was done, we went for the more interesting varieties: 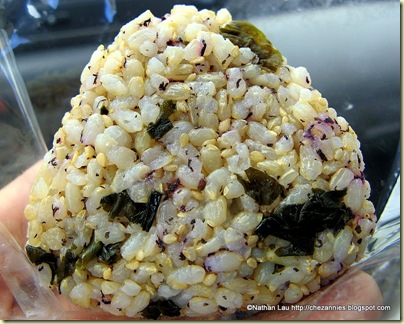 Who says a musubi has to have seaweed on the outside? Here, the wakame seaweed is actually mixed in with the rice along with flecks of shiso leaves and sesame seed. This musubi isn’t as strongly flavored as the savory Spam or salmon musubi. The floral shiso and wakame flavors are playfully hidden within the rice. But it was still delicious! 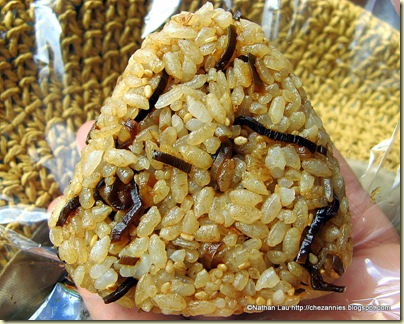 This musubi uses konbu, a different type of seaweed that is thicker and crunchier than the wakame. Annie took a bite of this musubi and said, "it tastes like the ocean!" The brininess of the konbu, combined with the sweetness of the rice, evokes a sense of the sea in your mouth (in a happy way).

About the only flavor that we didn’t like was the vegetable curry pilaf. It was just too weird for our tastes. 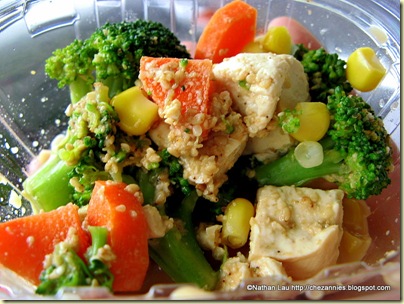 Annie also picked up a small tub of this Tofu and Broccoli Salad. It sounds simple but don’t let the name fool you. When I tasted this dish, I went speechless. The flavors were so refined, so skillfully put together. There was the barest hint of wasabi in the dressing. So subtle, it almost made me cry (no, I am not exaggerating!).

But Mom’s hair appointment was at 2 pm, Mana Bu’s closing time! We dropped Mom off and raced through the backroads of Mo’ili’ili to get to the musubi store before he closed. Fortunately, we made it with 5 minutes to spare. I walked in, and Manabu-san came out from the back, surprised.

"I’m back!" I smiled, "Your musubi are so good, I just had to come back and get some more!" I gushed about how we devoured his musubi and loved every bite (except for the curry one). I raved about how good the Tofu and Broccoli Salad was. I told him about how I was from San Jose and found out about him through Tasty Island.

I said to him that I was so impressed with the quality of his musubi that I would tell everybody else about him (check!). On my way out, he picked a box out of his dessert case.

"A sample," he offered, "for you. It has whole strawberry in it. Just made it at 8 am this morning." 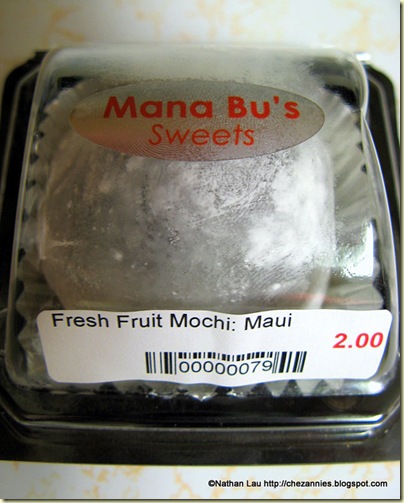 The outside of the mochi looks like any other mochi. But cut into it… 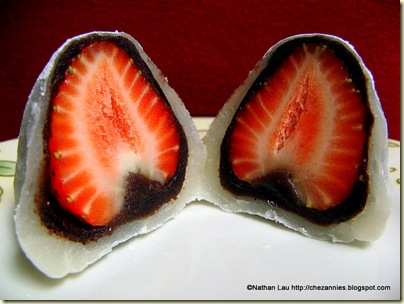 …and you’ll see that there is a whole fruit in there, blanketed in a thin layer of azuki bean paste.

Awesome. Just awesome. These are the best musubi we have ever eaten. If you ever are in Honolulu, YOU MUST GO and get these musubi. Forget about picking up a Zippy’s Zip-Pack or (God forbid) a McD’s Happy Meal on the way to the beach. Pack these musubi to go. They will make you so happy. Not only that, they will make your SOUL happy! 🙂

Well, we got back from Hawaii and we brought back a few little gifts for our friends. One of them is actually for YOU, our dear readers. It is a musubi mold so you can actually make your own Spam musubi at home. And since a good Spam musubi needs good nori, we’ll throw in a package of Korean seaweed to go along with it. (No, we will not send the Spam or the rice. I figure those things are readily available anywhere.) 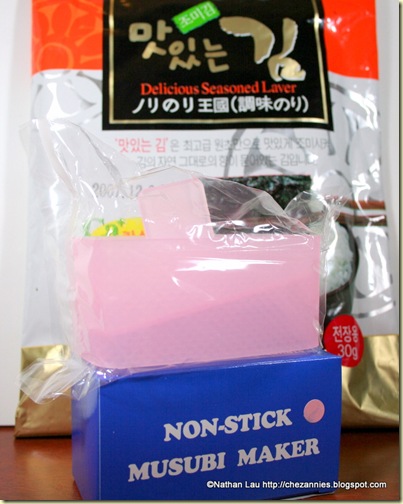