Niku-jaga is the Japanese equivalent of Western-style “meat and potatoes”. Just like its Western counterpart, it is total comfort food. 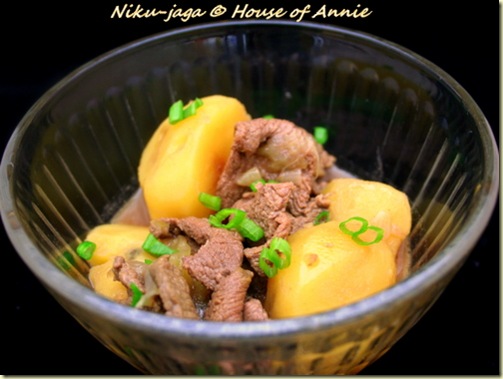 The first time I had this dish was at the kitchen of my graduate dorm in Hawaii (yes, that place AGAIN!). A Japanese friend of mine was making it and the smell was heavenly. She offered me a small bowl and it was sooo good. I shared it with another Japanese friend who lived next door to me and she was transported back to Japan. She then proceeded to make it within that week herself (but she used ground beef—remember we were poor graduate students!).

I found out later that niku-jaga is a much loved dish in Japan though there are regional differences. The first time I made niku-jaga, I invited some friends over to share the meal with me. My friend’s boyfriend comes from Japan. He looked at my niku-jaga, gave a sniff and said, “oh, you made it Kansai style”. He did eat it but proceeded to tell me all about how great Kanto-style niku-jaga is. Those from Tokyo (Kanto) area have a distinctly strong soy-flavored, less brothy dish. Other regions have a lighter and more brothy dish. Ah well…differences are what makes food such an evolving thing. I LOVE it!

As a matter of fact, as I looked up this niku-jaga dish, I realized that this dish has seen some evolution alright! I even watched an episode of Iron Chef that had the challenger chef coming up with his special niku-jaga dish. Some niku-jaga recipes uses pork instead of beef. Other recipes for niku-jaga include more vegetables. So not only is this dish yummy, you can create many variations of it by adding other vegetables (carrots, mushrooms, burdock root) or changing the meat around (ground beef is also acceptable).

I’ve since made niku-jaga using several different recipes. I find that I really like the recipe I got from “The Japanese Kitchen” by Hiroko Shimbo (yes, I really like this cookbook!). For this recipe, I believe the style of the niku-jaga is more Kanto-styled. Compared to the first one I made, this is a kicked up version which is very flavorful and addictive. Using dashi instead of water makes a subtle but important difference. Also, cooking with a drop lid helps the dish to not accumulate more water thus keeping the sauce more intense.

And one key ingredient in niku-jaga is the onion. Though Shimbo recommends using one medium onion cut into wedges for the dish (the other is just for marinating), I would definitely use two. They add a lovely sweetness to this dish that complements the meat and potatoes like nothing else.

As for the soy sauce, if possible, use Kikkoman or other Japanese brands for this dish. I always keep different types of soy sauce in my house. For Chinese cooking, I will use Chinese soy sauces which contain a little sugar. For Japanese and Korean dishes, I normally go with Kikkoman.

Try this recipe out and see if you don’t gain a pound after not being able to stop eating it with the rice. And yes, please don’t leave out the rice—this dish just calls for rice to accompany it.

adapted from “The Japanese Kitchen” by Hiroko Shimbo

Method:
1. In a bowl, combine the beef and the sliced onion. Marinate the beef for 30 mins. 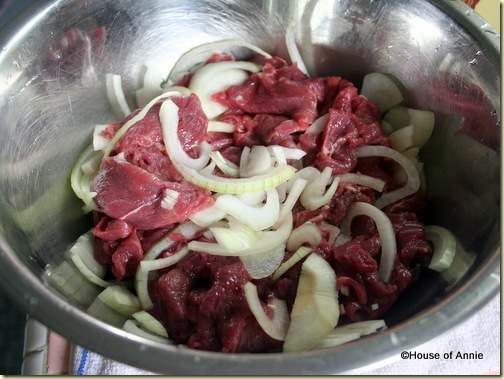 2. In a medium pot, heat the sesame oil. Remove the beef from the marinade, discarding the onion (don’t try to use the onion–it will taste like rust–yes, the first time I made this, I was too pake and used them in another stir-fry and it didn’t taste good at all). Add the beef to the pot, and cook it until it turns pale. 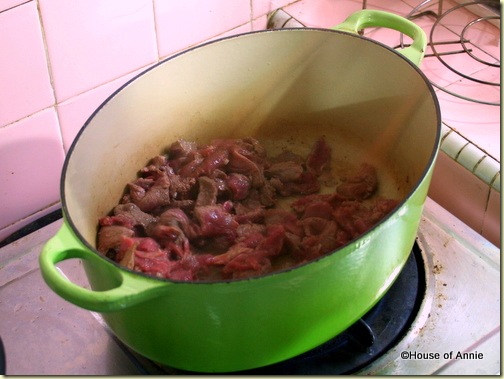 4. Add the potatoes and onion wedges to the beef, and give several large stirs. Add the dashi and sake, and bring to a boil. Cook the mixture over low heat, covered with a drop lid (I used foil that I crimped so that the foil just barely sits on top of the ingredients before covering with the lid), for 10 minutes. 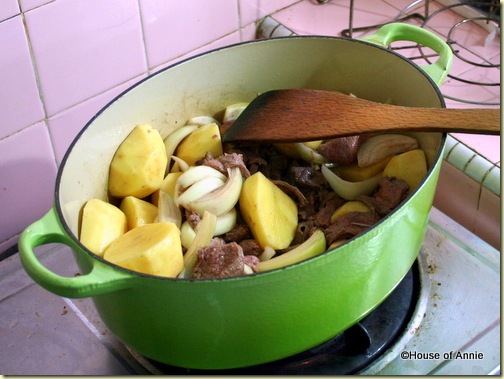 5. Add the mirin or sugar, and cook for 5 more minutes.
6. Add the soy sauce, and cook the mixture until the liquid is almost all absorbed–that can take between 20-30 mins.
7. Serve it garnished with some chopped green onions. 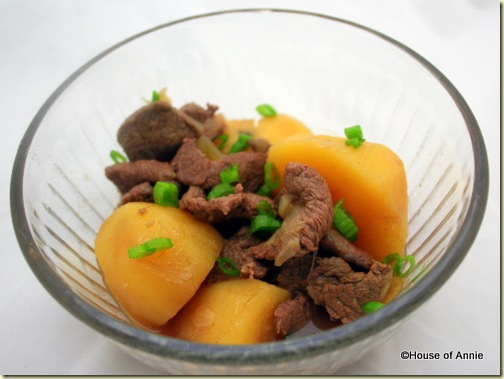