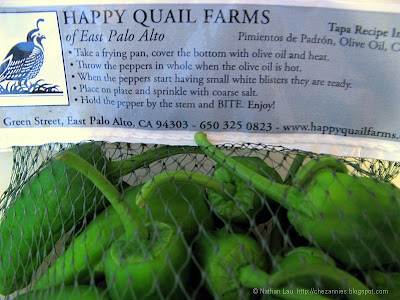 These little peppers may look sweet, but eat the wrong one, and you might be grasping for a glass of beer or a chunk of bread, your mouth on fire. Allegedly, one in ten of these peppers a tongue-scorcher. Chez Pim calls eating a mess of Pimientos de Padron “Culinary Russian Roulette”.

I’ve had these before, and my taste memory of them didn’t include searing pain and vigorous fanning of air onto my extended tongue. Of course, I only had a couple of them at the time. So when I read on Foodista and on We Heart Food that Pimientos de Padron were on sale again, I knew I had to get some. I convinced Annie to go to the Palo Alto Farmer’s Market and pick some up 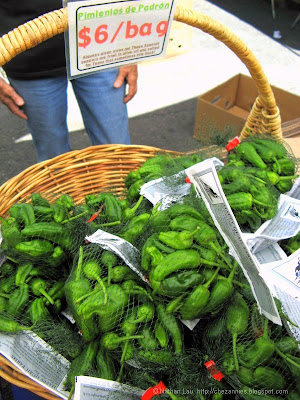 Even though Happy Quail Farms’s price for a bag of Pimientos de Padron is $6, we were able to get them for $4 dollars – a 33% discount! How, you might ask? First, we went later in the day, toward the farmer’s market closing time. We find that the vendors are more willing to make deals so that they don’t have to take back home or chuck their produce. Second, we bought more than one bag. The vendor was willing to give us 2 bags for $10, and 3 bags for $12.

We brought the peppers home, rinsed them, and dried them on a plate. Annie didn’t want to fry them inside the house so we went outside with the same butane stove / wok setup that we used in our Char Koay Teow post.

The recipe for cooking these bad boys is very simple. Pour olive oil into a pan to just cover the bottom. Heat it over high heat until it starts to sizzle. Toss the peppers in and turn the heat to medium. Keep stirring the peppers around so that the peppers cook evenly. 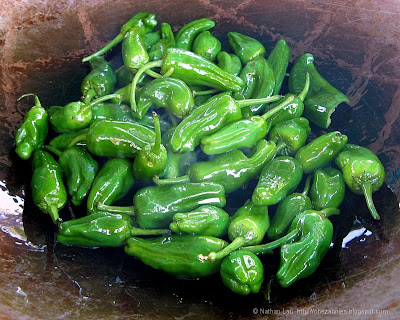 The skin of the peppers will start to blister and char. 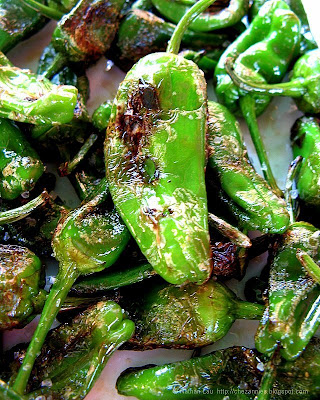 Keep stirring until all the peppers are pretty evenly blistered. Remove to a plate and sprinkle on a little sea salt. 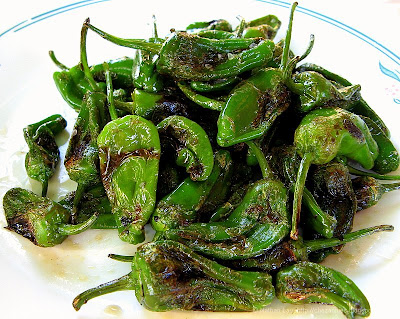 Now comes the fun part! Pick up a pepper by the stem and bite off the body. If you’re lucky, you will get one of the mild, sweet ones. The smoky, charred skin and the sea salt mingle with the sweetness of the pepper to build on the pleasure in your mouth. The small pepper will disappear and, before you know it, another one jumps into your hand.

Now, if you’re unlucky, you will find that you have a loaded pepper in your hand. The first sensations are the same – the slight crunch, the sweet flesh, the tickle of charred skin on your tongue. And then, BANG!

Surprise, surprise, surprise! Your tongue is on fire, and your eyes start to water in an effort to put out the blaze a few inches below. If it’s a really hot one, your nose gets in on the firefighting action as well.

Annie bit into one of those, as did another friend of ours who sampled our peppers. They eventually concluded that it was the larger ones, with more mature seeds that seemed to be the hotter ones. This goes along with Foodista’s assertion that Pimientos de Padron harvested in June / July are sweeter while the ones harvested in August / September are hotter. Essentially, the younger the pepper, the milder it will be…maybe…

Unless you are a total wimp, the heat of the pepper doesn’t stop you from eating more of them. Some people say that consuming capsaicin (the compound in peppers that gives them their heat) causes the brain to release endorphins – resulting in feelings of pleasure. So trying to “escape the heat” may not be all that worthwhile in the long run.

PS: Stay tuned. I’ve got three more amazing recipes from tonight’s dinner that I want to share with you.

20 thoughts on “Pimientos de Padron: How to Escape the Heat”