I think I need a vacation from my weekend.

Sunset at One Hotel Santubong 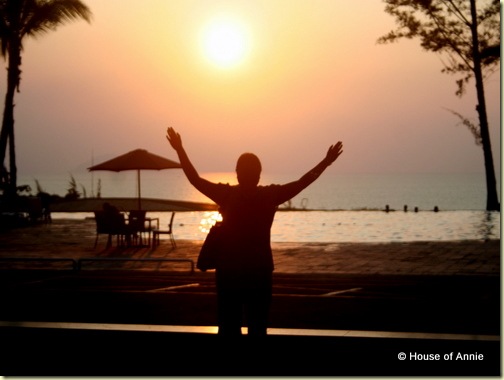 This past week, Annie and I spent 3 and a half days in Santubong (a hour’s drive north of Kuching) at the 2011 Rainforest World Music Festival as invited media representing the Sarawak Bloggers group. The good people at Sarawak Tourism Board gave us media passes to the event, allowing us access to the press conferences as well as the workshops and concerts at the Festival being held at the Sarawak Cultural Village. We didn’t manage to get a hotel room in Santubong, however, so that meant we had to make the 1 hr drive from Kuching and back, each day.

It was quite an exhausting experience. But it was one I’ll never forget.

Each day began at 11 am with a press conference where the media had the opportunity to meet members of all the different bands assembled for the Festival. 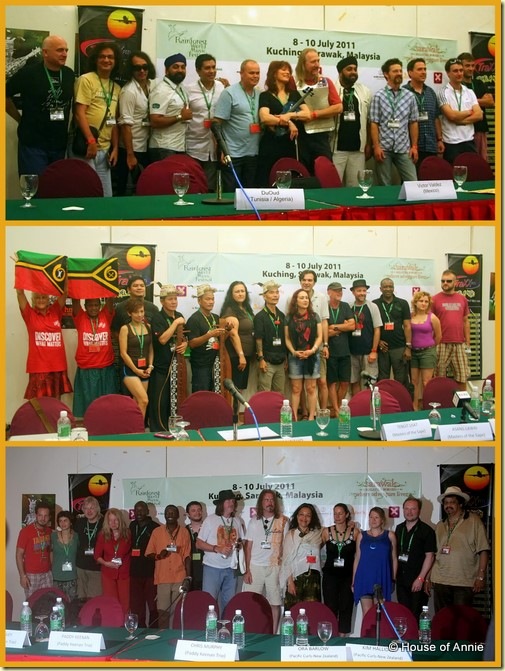 The bands would introduce themselves and their music, and then field questions from the audience. Some of the questions were serious, like one asking the band’s opinions about making political statements with their music. (David Martin of Australian band Kamerunga said that “Some folk music sounds like fun and meant for drunks, but a lot of folk music is dripping with politics.”)

Other questions were more humorous. Cyril asked, “Since it’s the Rainforest World Music Festival, how many of you want it to rain?“. The musicians burst out in horrified laughter. The wouldn’t want it to rain, because the extra humidity would affect their equipment and sound.

One person noted that the bands were heard to have been jamming together until the wee hours of the morning at the hotel bar and pool. She asked if the band members assembled at the press conference wouldn’t mind showing us a sample. Here is Zydeco performer Lisa Haley’s response: “Just try and stop us!”

That was on Day 1 of the Festival. You can see that the band members were quite energetic and excited! The level of energy clearly waned among the band members at the Day 2 and 3 press conferences however. No doubt due to too many late night jam sessions. 🙂

As Festival founder and artistic director Randy Raine-Reusch said in the opening press conference, the real magic of the Festival is found at the various workshops held each afternoon. That is where they break up the bands and form new ones based on the instruments or style of music that each individual plays. All the fiddlers gather under one roof, or all the pipers blowing their own horns. The loudest workshops are the drumming ones. (I wonder why?) 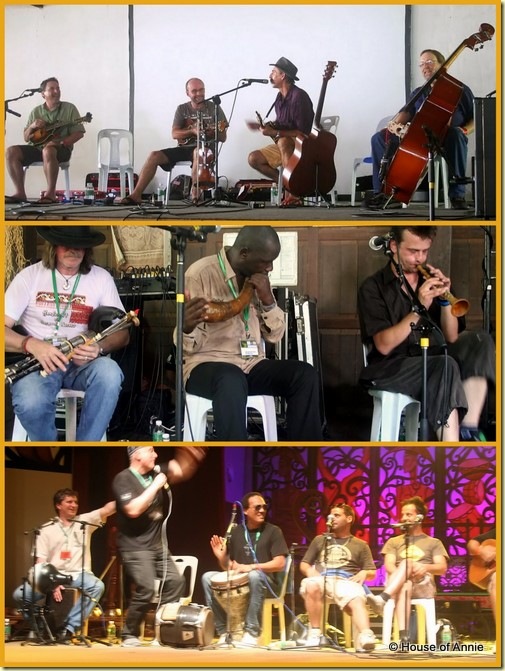 Again, you could see the energy levels of the band members waning as the days wore on. The workshop venues were not air-conditioned (save for the amphitheatre) and with the audience packing in the rooms, it can get stifling. Also, not every workshop had the same magical melding of music.

The Mountain Music workshop (pictured top) on Day 1 for the most part worked because the artists were used to playing with the various types of stringed instruments, and they had similar styles. Finnish fiddles plus Australian Celtic plus American Blue Grass? Yep, it works!

The Wind Instruments workshop on Day 2 (pictured middle) was a bit more difficult. How do you combine a clarinet, an Irish bagpipe, a Kenyan horn, and a trumpet (more like an oboe) from Brittany? It wasn’t easy. The best they could do was riff off of “Oh, Susanna / Banjo on My Knee”.

The “Men’s Voices” workshop on Day 3 (pictured bottom) found the magic that we were looking for. Thanks to the orchestration from Zurab of Georgian group The Shin, things went quite smoothly. The band found a synchronized sound and also made space for each other to show off their best licks.

The group with the most staying power would have to be the Leweton Women’s Water Group from Vanuatu in the South Pacific. Every day, between the workshops, these six women would wade out into the lagoon and perform their routine under the blazing sun. They never wavered. They were still smiling, even on the last day. No wonder Lonely Planet voted Vanuatu the Happiest Place on Earth in 2011. 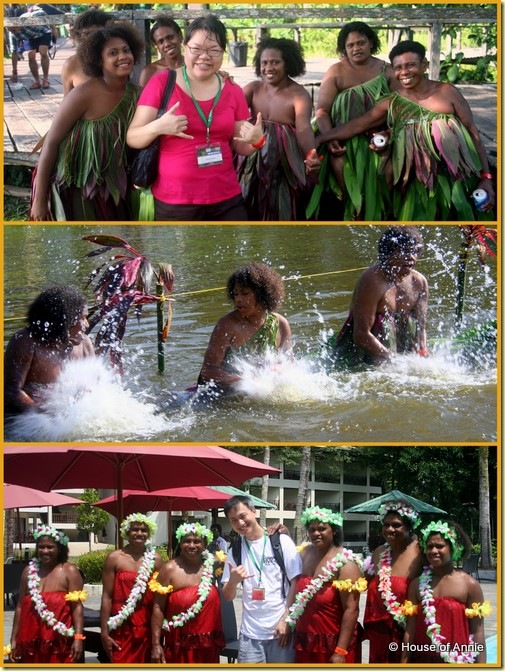 The evening concerts were the place where all the bands poured every bit of their heart and soul out before the crowd. These bands had been here all week, and they only had a 45 minute set to perform. They chose their best, most crowd-pleasing songs, and were itching to showcase their stuff. 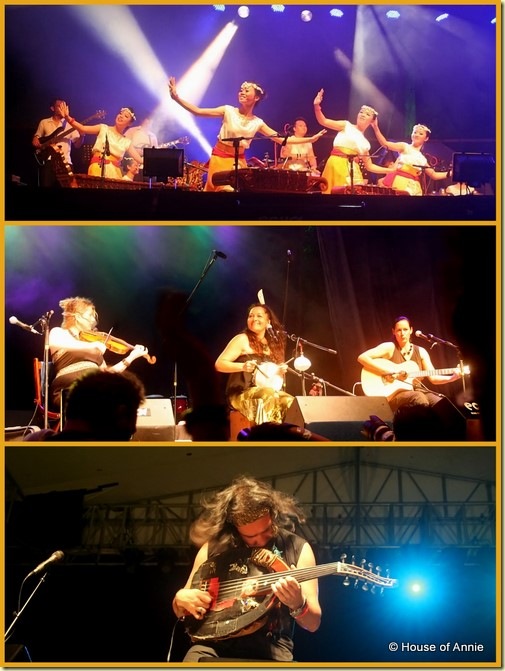 Agung Beat (pictured top), the gamelan fusion group from our neighbors in Kota Kinabalu, Sabah, really did Malaysia proud. They were very polished, and their music was astonishing. Later they were joined by KK artiste Dayang Noraini who wowed the crowd with her high energy vocals.

The girls of Pacific Curls from New Zealand (pictured middle) were another amazing band (I may be using this phrase too much in all our RWMF posts – every band is world-class talent!). With their intriguing blend of Pacific Island, Maori, and Scottish influences, the audience was kept rapt and appreciative.

The dudes from Duoud held the audience in a trance with their Arabian lute music backed by techno tracks. Frontman Mehdi Haddab (pictured bottom) put every ounce of energy into playing his oud. And the crowd ate it up: 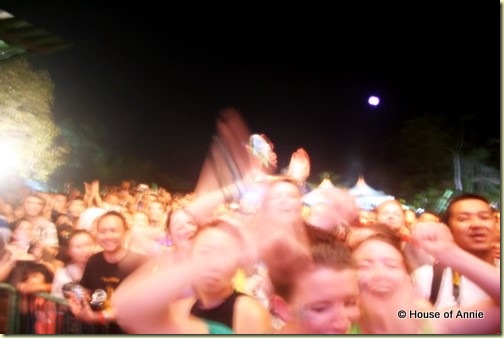 I watched him, enthralled, the entire set. He was “in the zone”, but it was taking a lot out of him. Sweat poured off his face and arms. Partner Jean-Pierre, the Mixmaster on the Macintosh, seemed to be egging him on. As the set built to its crescendo, I stepped back into the photographer’s pit and focused on Mehdi.

At last, he was finished. The thrum of his oud was drowned out by the cheers of the crowd. He was gasping, spent. EXHAUSTED, finished. This Duoud was DONE. 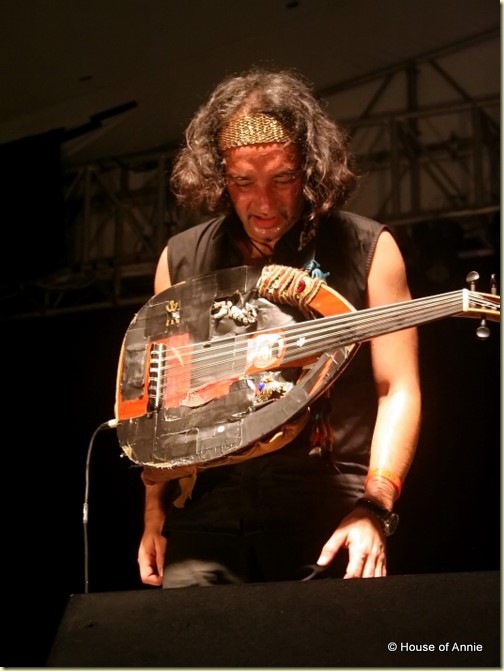 But you know what? I bet he went back to the hotel later that night and jammed some more until 6 am.

The music of the other artists would be the only way to feed back the soul he had just given away.

We’ve got a lot more pictures and video from RWMF to show you, PLUS an exclusive interview with one of the artists from the Festival. So stay tuned! The best way would be to subscribe to our blog and get our latest posts by email or RSS reader. We’ve also got a Twitter feed and a Facebook fan page, if you’re into that kind of thing.