I found the beef! 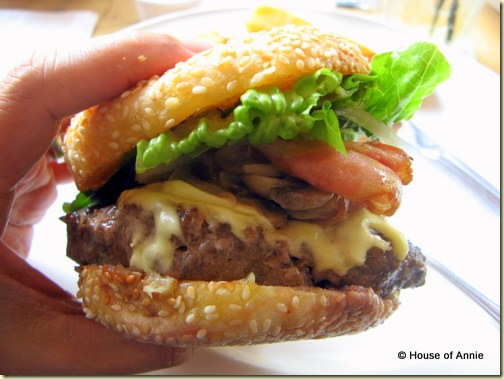 Do you remember that old Wendy’s Hamburger commercial with the old lady yelling “Where’s the beef?!?” when she sees a pathetically tiny burger patty inside a huge bun? That’s what I feel like yelling whenever I see a burger here in Kuching. The hamburger patties aren’t miniscule, but they are not that big either, AND they aren’t 100% beef as well – there’s a lot of soy mixed in.

Suffice to say, I’ve really been craving a good beef burger. Doesn’t have to be grass-fed, local beef from the North Shore of Oahu like the one I had at Town Restaurant in Kaimuki. Even a Double-Double Animal Style from In-n-Out would be better than the “Two semi-beef patties, special sauce, lettuce, cheese…” Big Mac I can get at the Kuching Airport McDonald’s.

So I was really happy that Annie’s cousin took us for lunch to the Rider’s Café at Bukit Timah Saddle Club hidden in the green heart of Singapore. This equestrian club actually has two Western restaurants on site – the casual Rider’s Café and a more upscale French restaurant called Mimolette. (Actually, I wouldn’t have minded Mimolette either – we haven’t had good French food since our visit to Bistro Moulin in Monterey last year.)

The Sunday lunchtime crowd wasn’t too bad. We were seated right away at a table out on the veranda, overlooking the stables. You can see (and smell) the horses out there. We had a choice of ordering either breakfast or lunch items. We decided to go with lunch.

First dish to come out was this deep fried calamari. I thought the panko crust was nice and crunchy but the batter itself was pretty heavy and thick. 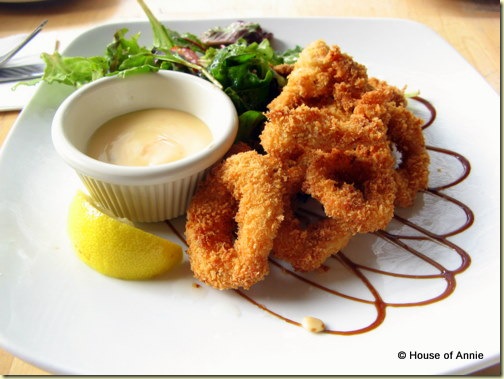 Annie ordered this chicken paillard salad which is a butterflied chicken breast, grilled and served atop some salad greens and pine nuts. I thought the chicken portion was too much for the small amount of greens that came with it. 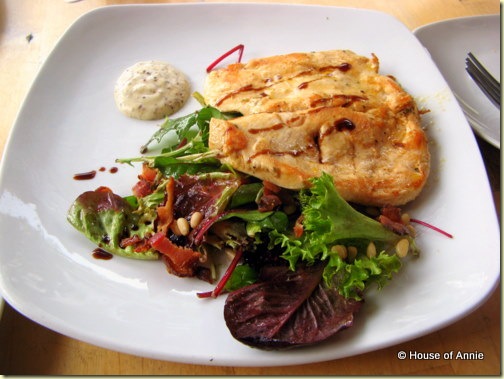 Esther got a Spaghetti Bolognese which came on this huge platter, but only filled the small bowl in the center. The sauce tasted all right, pretty standard and no worse than I’ve had here in Malaysia. 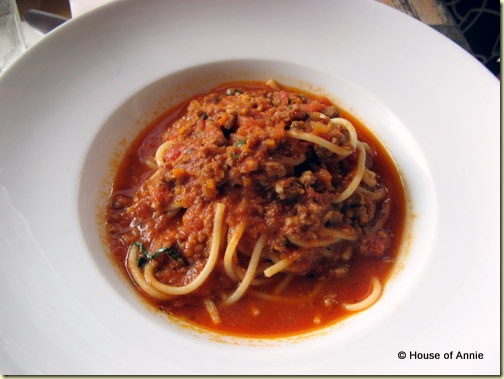 Annie’s cousin got the grilled halibut, one of her favorite dishes at this restaurant. 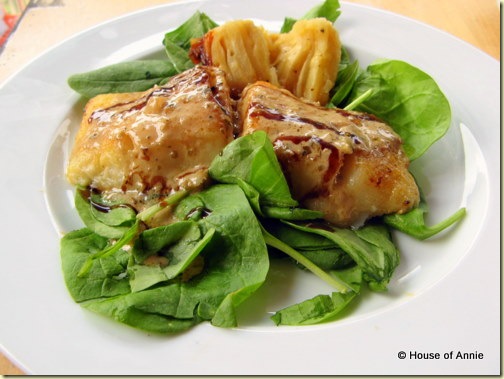 Annie herself ordered the grilled steak with mashed potatoes. Not quite sure which cut of beef this was (skirt? flank?) It came drizzled with (thankfully, not drowning in) some brown gravy. A decent hunk of beef, a little overcooked but passable. The mashed potatoes were too gummy for my tastes. 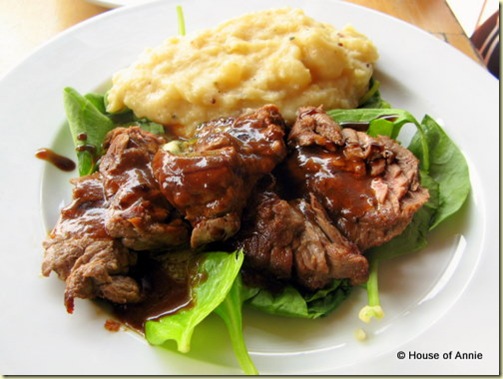 Actually, I was vacillating between ordering the steak or the burger. So it was a good thing that Annie ordered the steak so that I could get the burger. Mine came with melting cheddar cheese, REAL pork bacon, and sliced mushrooms. And a side of REAL steak fries! 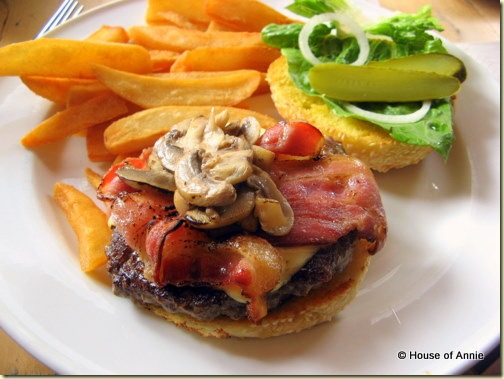 Look at that thick patty, the melted cheese, the salty bacon. The first bite was pure bliss. The crunch of raw lettuce and onion, the delicious taste of juicy beef fat. Best of all, they cooked the patty to a perfect medium inside. (If there’s one thing I can’t stand in a burger, it’s a patty that has been cooked till it’s hard and grey.)

Of course, I swapped plates with Annie to let her have a few bites of my burger while I sampled her steak. I liked it, but was more than happy when she returned the burger to me. ;-d

Overall, a decently good Western meal in an uncommon setting in Singapore.