Welcome to our memorial page for Ryosuke Yoshioka, the Sushi Man of San Francisco. If you have an anecdote, story, or remembrance of Ryo, feel free to leave a comment and share it with us! 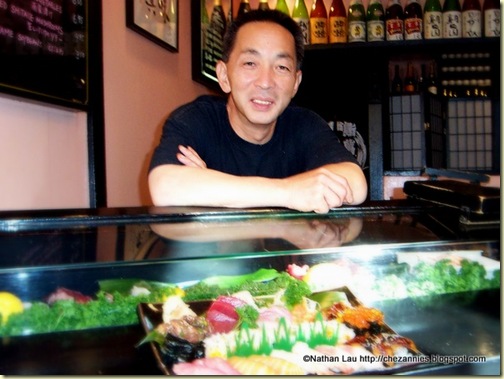 I was chatting with a friend the other day when she asked me if I had heard that the owner of Sushi-Man Restaurant in San Francisco was stabbed to death. No, I hadn’t. I quickly searched Google and found the article on the San Francisco Chronicle’s website about the killing. Needless to say, I was shocked, dismayed, and downright sad to hear the news.

Taking a Chance, Making a Friend

I remember the first time we met “Ryo”. I had brought Annie and Daniel up to San Francisco to watch the 4th of July Fireworks from the Marina. I also wanted to have some good sushi while we were up in the City.

We had recently been turned on to high quality sushi after many years of so-so California rolls and cheap sushi boat sushi. I found a few names of sushi places in the Yellow Pages but when I called them, I found they were all closed for the Independence Day holiday.

Searching online, Annie found the reviews of Sushi-Man sounded good. I was dubious (I mean, with a name like “Sushi-Man”, doesn’t that make you think of cheap sushi boat-type places?). But I figured, why not give it a try, since all the other places were closed. When we drove by the storefront on Bush St., we spotted a middle-aged Japanese man out front sweeping up and watering the plants.

“Are you open today?” we called out from the car.

It turns out that the man was none other than Ryo, the chef. We sat at the left side of the bar, in the corner where we could leave Daniel in his stroller (he was about 4 months old at the time). After perusing the menu, we ordered the sushi dinner for two (pictured above).

Since we were the only customers there at the time, we had his full attention. So we struck up a conversation with him. Being neophytes to high-quality sushi, we had a lot of questions about the proper way to eat sushi. Ryo answered them with patience, candor and humor.

Nothing Compares to Ryo

That positive experience left a lasting impression on both of us. The sushi itself was good (albeit on the expensive side), but it was the conversation, the relationship we struck up with Ryo that made us want to come back.

We tried out other sushi places in San Jose, but they were all lacking. Both in quality of fish and in quality of service. Nothing else compared to Sushi-Man.

Giving Us His Best

So, we went back. And instead of ordering from the set menu, we told him to just give us the best. He took care of the rest. What a difference it was!

Now Ryo had free reign to showcase his sushi. We weren’t served just the normal salmon or tuna. Ryo introduced sanma (pike mackerel) to us. It is a seasonal fish, flown in from Japan only in Autumn. Sanma has a nice flavor, just slightly bitter but not off-putting like normal mackerel. It is now one of our favorite fishes.

“Watch this!” he said, then slapped the hunk of clam neck flesh in his hand. The flesh contracted and curled on its own. “See? The flesh is still moving. It’s very fresh. Now look at this.” He took another hunk of clam from his refrigerator and slapped it. No movement. “This clam is dead. No good. I will only serve you the fresh clam.” 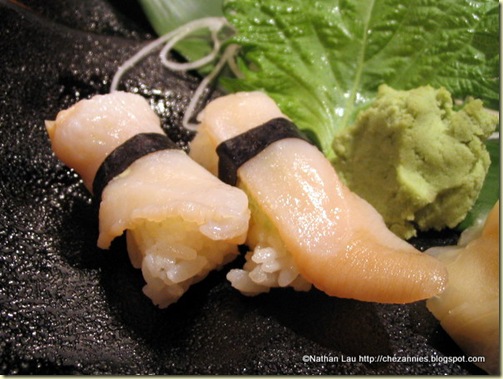 We also got a pair of amaebi (sweet freshwater shrimp). These shrimp are incredibly sweet and succulent. Ryo even deep fried the shrimp heads for us – so crispy and savory! A perfect counterpoint to the nigiri. 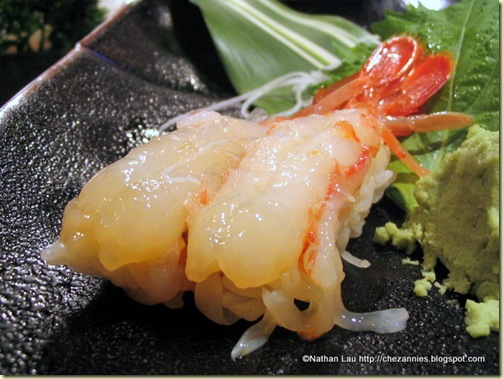 We became real fans of Ryo the Sushi Man. He gave us amazing food but beyond that, he was kind and generous. He always treated us special.

Like the one time we arrived and there were people sitting in “our corner”. He actually asked if the people wouldn’t mind moving one seat over so that there would be enough room for us to squeeze in. Or the time he comped us a glass of unfiltered, premium sake, just because it was my birthday. 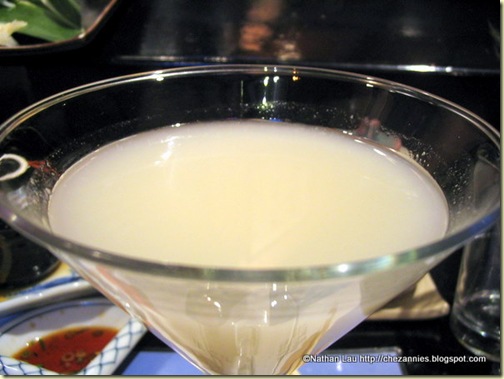 Eating at Sushi-Man was not cheap. We were getting the best quality food, and paying for it. We couldn’t afford to do Sushi-Man on a monthly basis. But we resolved that, whenever we had a craving for sushi, we’d set that money aside into a special “Sushi-Man” kitty until we had enough to afford a dinner there.

Eating at Sushi-Man was not quick, either. When we went there and told Ryo, “omakase” (meaning, we trust you), the experience would be at least a 3 hour affair, if not longer. First, he’d set us up with appetizers like ankimo (monk fish liver – like a fishy pâté), soft-shell crab, or even shiokara (squid marinated in its own innards – not for the faint of heart!) 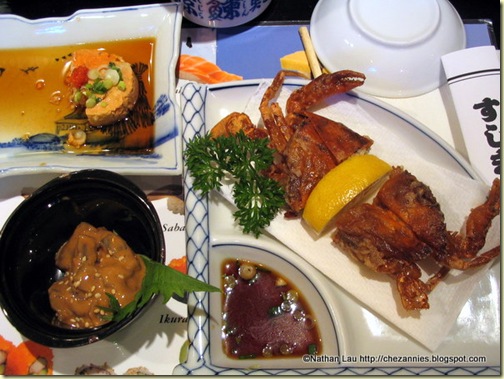 After the appetizers, it would be a methodical procession of sushi, a pair at a time, with long breaks in between to enjoy the food and also enjoy the conversation with Ryo and the other customers at the bar. There was real camaraderie at Sushi-Man’s sushi bar.

A Little Bit About Ryo the Sushi Man

Ryo originally came from Kobe, Japan where he trained as a sushi chef. His restaurant, Sushi-Man, is one of the oldest sushi restaurants in San Francisco. He was there before sushi became such a big thing in America. But he didn’t like to do the typical fancy roll sushi like Caterpillar Rolls or Dragon Rolls. He’d do rolls because the customers would ask for them but his real passion was for quality, traditional sushi.

He’d been in the business for a long time. Things kinda slowed down for him when a strip club opened up next door. Somehow the restaurant managed to survive through all its ups and downs. He was looking forward to retiring one day so he could golf more. But since he married late in life and his son (now 15) was still in school, he didn’t know when he might quit. We (selfishly) hoped he would remain as long as he could.

Going Back for More

Of course, we talked about him a lot whenever the subject of sushi came up amongst our friends. We brought several of them with us on different dates. On one of those dates, our friend’s wife said she couldn’t eat fish, thus springing the surprise announcement that she was pregnant! So for her, Ryo fixed a special marinated cucumber and shrimp salad. 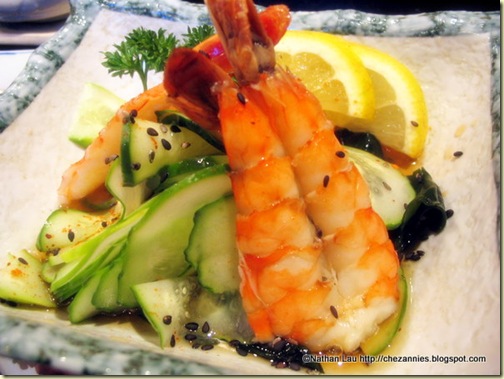 Another time, we were visiting with my sister for dinner in San Francisco. After we said our goodbyes, we decided on a whim to stop in at Sushi-Man to see Ryo and get some dessert. He always served the best green tea ice cream. We all loved it, including Esther. 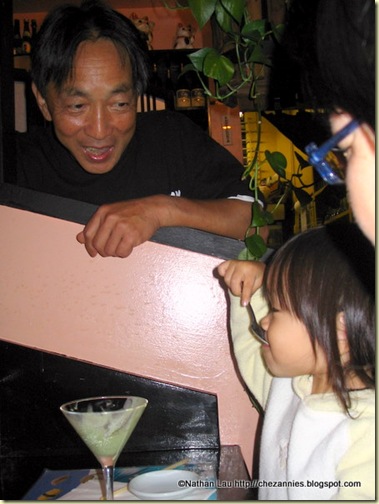 Ryo really loved our kids. Many times he’d come around the counter to sit and play with Daniel and Esther. He wasn’t just the sushi chef anymore — he had become “Uncle Ryo”.

The last time we were there was in October 2006, for our anniversary. We made reservations and told Ryo specifically what the occasion was. Here is the sashimi platter he made for us. Not only did he have our favorite fish, sanma, as part of the platter, he also used the fish head and spine to make a beautiful presentation. 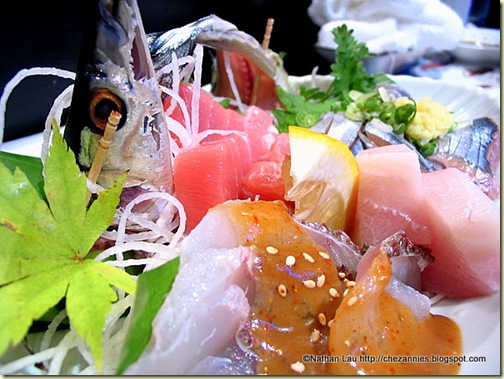 We haven’t been back to Sushi-Man since. We wanted to eat sushi more than once a year, and a little closer to home so we started going to Akane in Los Altos. The prices were more affordable there and the quality was still very good. But there was no connection between us and Shu-san or Shin-san like we had with Ryo. It seemed as though Ryo was our first love, and we were cheating on him by going to other sushi bars.

Annie and I were just talking about going to see Ryo in February for her birthday. It would be the perfect opportunity and I was already thinking of what other adventurous friends we could invite to join us. And then we come to find out this tragic news.

Ryosuke Yoshioka’s life was ended much too early. Our hearts go out to his wife and son. We, along with all his other loyal fans, will mourn his death. I do not know whether Sushi-Man the restaurant will remain in business. But Ryo the Sushi Man will always live in our memories and our hearts.

For all the good food and good times, Doomo arigato, Ryo. You will be missed! 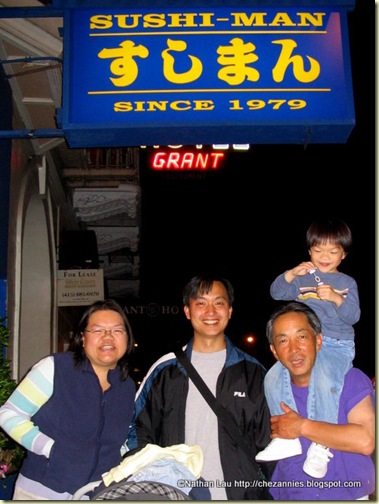 40 thoughts on “In Memoriam: Ryosuke Yoshioka, the Sushi Man of San Francisco”