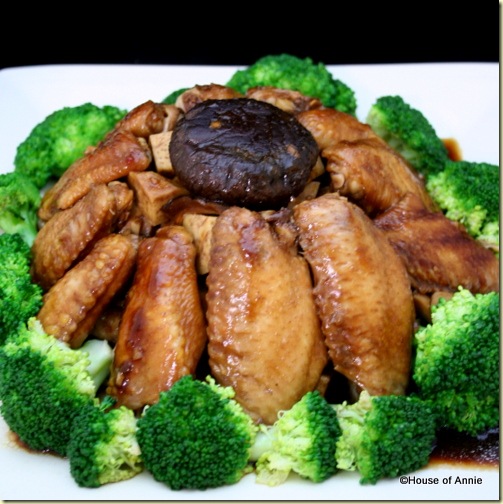 I’ve been having a lot of success with steaming lately. Both the salted fish chicken and the stuffed squid were delicious dishes that met with the approval of the whole family. Thus, I decided to go about trying yet more dishes from this latest cookbook I bought which was all about steaming.

The recipe I decided to try next looked a little bit more complicated but actually turned out to be quite easy and yet filled with yummy flavors. Also, Nate thought it had shades of Khau Yoke flavors without the crazy amount of work that Khau Yoke actually takes. And as for the presentation, it’s a dish with the "wow" factor. When presented tableside, it really looks like something that could have come out of a fancy Chinese restaurant.

You know how some people won’t buy a cookbook unless there are pictures in it? Well for this recipe, I wouldn’t have thought to try it if not for the beautiful picture of it. The name of the dish itself doesn’t inspire me to cook it but the picture looked so beautiful that it made me pause and peruse the recipe. So what is this intriguing dish? Well, it’s basically a chicken dish with mushrooms and yams (in the US, we would call this Chinese taro). Something quite simple, and if cooked as a braise, would probably work too. But it wouldn’t have that amazing presentation factor.

The recipe calls for the middle portion of the chicken wing (I saved the drumettes to use in the other steamed dish that I mentioned earlier) to be marinated with the mushrooms and then the wings are arranged neatly in a deep bowl (one that will fit the whole length of the wing). Once the chicken is arranged, the rest of the ingredients are heaped in the middle of the bowl inside the chicken wings and pressed down till level with the top of the bowl. Then this is steamed till cooked.

The only change I made was to not line the bowl with cling film (I have something against using plastic in high heat). The first time I made this, I worried that by not adding the plastic wrap, the whole dish would fall apart and it wouldn’t look as good as the picture. Well, I’ve made it twice now and it’s turned out just fine. I must say though, that the part where you overturn the bowl is probably the hardest part of all so you will have to do this carefully.

Once you have the chicken and mushrooms marinating, the only other thing you have to do is prepare the yams (taro). Like the Khau Yuk, you need to cut the yams and then deep fry them before steaming. Unlike that dish, this part is a lot easier in this dish as the yam pieces are cubed into small pieces (and you also don’t need as much). After about 5 minutes of frying, you take the yam pieces out. Even though the recipe doesn’t say to do this, I normally add the yam to the mushroom and chicken marinade to also coat it in the marinade sauce. 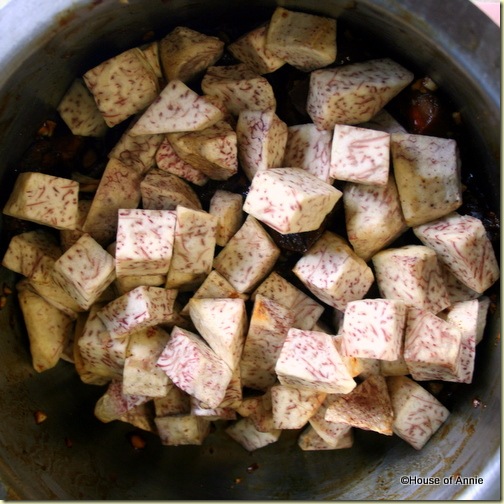 adapted from “Mama Steamed Delicious” by Jamie Jong
Ingredients:
12 chicken wings (middle part only)
200g yam (cut into 1 inch cubes)
1/2 can/100g button mushrooms (halved), you can use fresh if you can get it
6 pieces of dried shiitake mushrooms (reconstituted in water), save the best piece whole and cut the rest into quarters
200g broccoli (cut into similar sized pieces, and blanched or steamed)

Method:
1. Combine oyster sauce, fish sauce, Chinese rice wine, dark soy sauce, garlic, and five-spice powder in a bowl. Add in the chicken wings and shiitake mushrooms, and button mushrooms and mix with the marinade and leave to marinate for an hour. 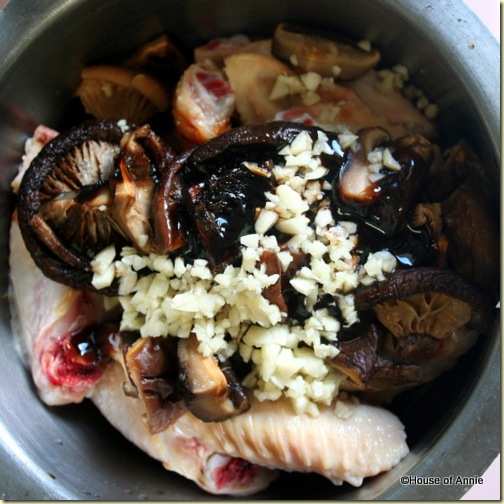 2. In a wok, add enough oil to deep fry the yam (taro) pieces, once the oil is heated (use the chopstick test), add yam and fry for about 5 minutes. Take out yam and place on a plate with a paper towel to drain oil. Then add to the rest of the marinated ingredients. 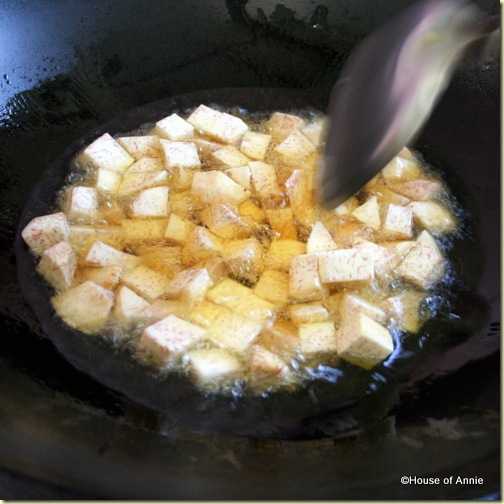 3. In a deep bowl, take the chicken wings and coat with tapioca/corn starch (the 1 Tbsp), then arrange in the bowl around the sides, standing up, as neatly as you can with the outer skin part facing out. 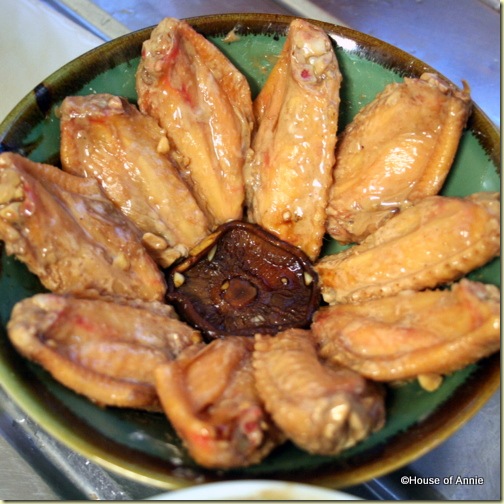 4. Put the whole piece of mushroom in the center of the bowl at the bottom. Then place all the rest of the mushrooms and yams (taro) in the center of the bowl. They should just fill to the top of your bowl. Press down gently to level if you have to. Make sure to scrape up all the marinate sauce and add the 1/4 cup water to the sauce and mix. Then pour over the ingredients in the bowl. Cover the bowl with foil. 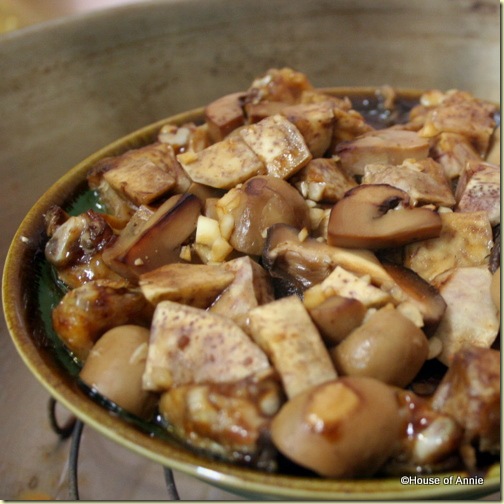 6. After 40 minutes, remove bowl from wok and let cool for about 5 minutes. Carefully place a plate on top of the bowl and pour out liquid into a saucepan (if you plan to thicken the sauce) or into a bowl if you plan to just pour it on. If you are going to thicken the sauce, add the rest of the tapioca starch (1/2 Tbsp) to the sauce and mix well before heating. Once sauce is thickened, remove from heat and pour over plated dish.

7. Turn out dish carefully onto a plate, making sure to center it before removing the bowl. Carefully remove bowl. Arrange blanched broccoli around the dish, and pour sauce over the dish.

There are some important things to note about this recipe. Don’t get greedy with the ingredients. There is a reason for the amounts. The second time I made this, I had a little bit too much yam and decided to just use them all–that was a mistake as it made the middle portion too full (besides, yams also need a good amount of water to fully cook and with more, I would have needed to up the liquids which would then lead to an overflow, etc–you get the picture). The end result was that the dish was not as flavorful and the yams were not as fully tender as the first time I made it.

Other than that, I also lessened the amount of tapioca/corn starch that you needed to coat the chicken with. The first time I used the full 2 Tbsp that was called for and found that it made my sauce much too thick and gloppy. The second time I just dusted the chicken with about 2 teaspoonfuls and even though the sauce came out thinner, I preferred that to overthick, clumpy sauce. Besides, the recipe does ask that the sauce be poured out and thickened with more tapioca/corn starch. I’ll confess that I did not bother with this part and the dish still turned out fine.

Finally, when you have finished steaming it and you’re about to turn it out, don’t stress about it. I normally cover the dish with aluminum foil while steaming (again to avoid using plastic wrap). When it’s done, I remove the foil, and using a cloth to hold the bowl, I tip the bowl to drain as much of the liquids as I can into another bowl. You could also hold a plate over the dish before tipping it to ensure nothing falls out. Then, after you have removed most of the liquids, put the plate (top part facing bowl) firmly in the center of the bowl.

With one hand firmly on the plate and the other on the bowl, take a deep breath and confidently upturn the bowl onto the plate. Let it sit for just a bit, giving the bowl a tap to make sure that the ingredients have a chance to come out. If you have to adjust the dish to center it, do it while it is still in the bowl. Remove bowl gently and the dish should be sitting nicely and presentably on your plate.

By the way, I normally upturn the bowl over the sink just in case some of the sauce spills out so you won’t end up making a crazy mess. Once you have it on the plate, don’t try to adjust it or you will end up breaking the molded piece and losing your nice presentation. Decorate around the sides with steamed or blanched broccoli.

Anyway, if you are looking for a dish that has the "wow" factor to impress guests, I recommend you try this dish. It’s not too hard at all to do and the look on your guests’ face (or your family’s) will make you feel so good.

7 thoughts on “Steamed Chicken Wings with Taro and Mushroom”