Today we attended the “Made in Hawaii” Festival at the Blaisdell Center. This three-day festival showcases all sorts of products that are locally produced, including clothes, artwork, crafts, and of course FOOD. 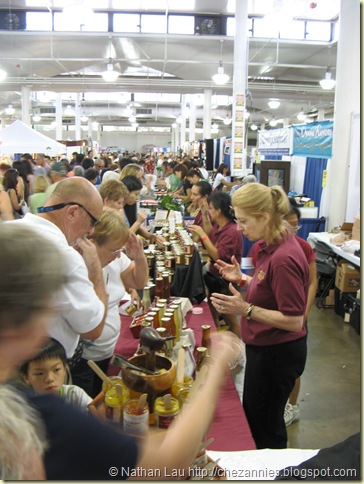 Rows upon rows of arts, crafts, and food to tempt every buyer. Most of these products are geared to the “local” tastes and culture. We were on the hunt for a palaka print cover for the long folding table in our patio back in San Jose. We couldn’t find it, but we did come home with a Hawaiian Forest calendar and a few bottles of Lilikoi Jam and Poha Jelly from Maui Jelly Factory: 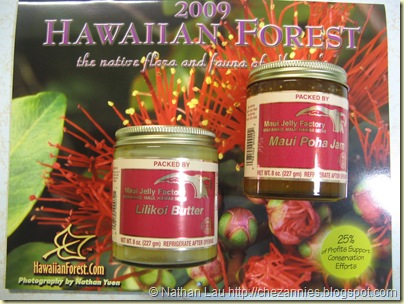 The thing I like about this Festival is that you really see a microcosm of Hawaii, all in one place. People from every ethnic group, every walk of life are here. Most of them are hapa – mixed race. It’s just the Hawaiian way, I guess. Immigrants from all over the world settled on Hawaii’s shores, intermarried, and intermingled cultures. This acceptance of each other is what the Aloha Spirit is all about. It is what gives this place its peaceful, joyful, and harmonious balance.

About the only people who didn’t look like they were having a good time, strangely enough, were the Native Hawaiian t-shirt vendors. They were selling shirts with messages like “The Natives are Restless”, “Aloha means Goodbye”, and “Pure Blood”. They certainly do have a legitimate reason to be restless and angry, what with the anniversary of Hawaii’s August 1959 admission into the United States reminding them of the illegal overthrow in 1893 of the Hawaiian Monarchy by American businessmen. Even though their t-shirts were “made in Hawaii, their attitude seemed so out of place at the Festival.

While there were a lot of vendors offering samples of their food, we still needed something substantial for lunch. We picked up a bento and a couple of Spam musubi and went into a side room where they were showcasing live Hawaiian music. As luck would have it, Hoku Zuttermeister and the legend Jerry Santos were on stage:

They were singing songs of old Hawaii, and their music and the graceful hula dancing by Hoku’s aunt and mom were so beautiful and soothing. It was a “chicken skin” moment. This is what Hawaii is about: the descendants of immigrants, singing and dancing to a song written in Hawaiian, telling of the beauty of the people of the Islands. Their ancestors may not have been “made in Hawaii” but somehow they became Hawaiian – they were “Hawaii-made“.

We stayed at the Festival for almost 6 hours, walking every aisle and sampling almost every food. (Probably the only food we didn’t like were the Noni products. The noni fruit leather tasted like really ripe Parmesan cheese. I spit it out.) Then we had to go home because we had a dinner appointment with Brian, a good friend of ours and one of my groomsmen.

Brian is another example of someone who is “Hawaii-made”. Originally from Michigan, this haole boy took to the local culture, joined a Tahitian dance troupe, married a hapa girl, and is living in the back of a valley where he raises all kinds of tropical fruits and native Hawaiian plants in his yard. 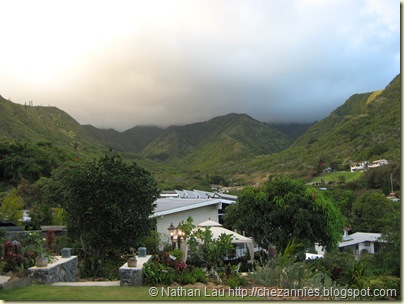 Here he is picking a ripe, juicy starfruit from his laden tree. I have never had such a sweet and succulent starfruit before. Forget having to add salt! 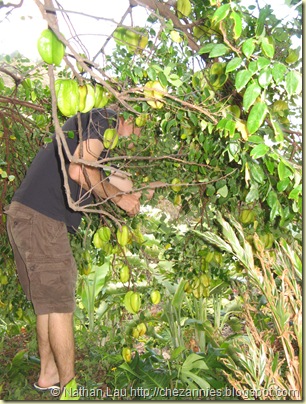 Brian is a landscape architect by training, and a landscape maintenance manager by trade. He has a terrifically green thumb, and has found ways to blend native Hawaiian plants with non-native “exotics” while taking care to ensure none of them are invasive. Here he is trying to decide what to do with this just-imported, fresh off the plane California native, the Daniel plant. He would have thrown him over the wall except for the fact that the Daniel plant is also known by his Hawaiian name, Ikaika (meaning “strong” in Hawaiian, or “squid squid” in Japanese). 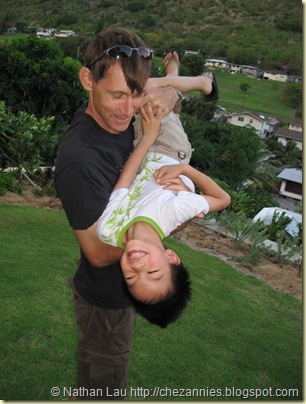 Dinner was grilled chicken that Brian had marinated over two days. When I asked him what he marinated it in, he said, “whatever I found in my pantry. There’s dried onion, garlic, salt, pepper, some Aloha Shoyu teriyaki sauce, some Old Bay seasoning…I don’t remember it all.” 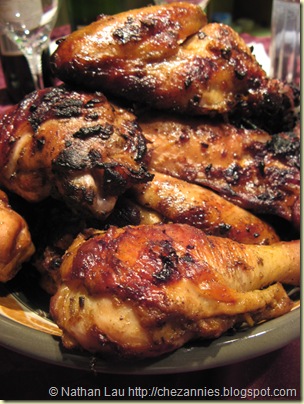 Teriyaki and Old Bay? Who whould have ever come up with this kapakahi recipe? But you know what? It rocks! Here is another example of “Hawaii-made”: you take the best of what you like from individual cultures and mix them together. The mysterious amalgamation blends to form something completely unlike the original components. They come together and create a beautiful, harmonious, and joyful balance.