Where can you get the best steaks in San Jose?

The Grill on the Alley (San Jose) 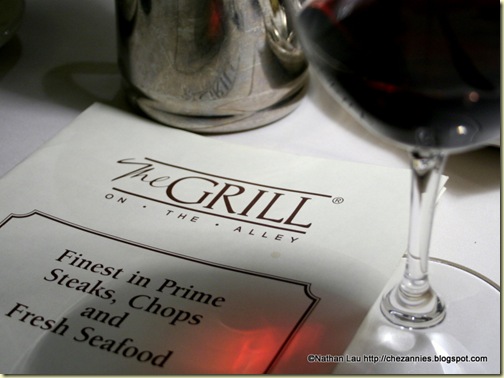 Our good friend is a big steak and potatoes man. He eats steak more times than either his wife or his doctor would probably like. He also travels quite a bit on business, so he’s had steaks in top restaurants in cities all over. And he claims that the best steaks are found right here in downtown San Jose, at The Grill on the Alley.

So, after years and years of hearing him tell us about how good it was, he finally invited us to join him and his wife for dinner there. We had reservations for 6:00 on a Saturday evening. We were running a bit behind schedule but the restaurant wasn’t full so we were seated right away. Our waiter, Wally, wasted no time decanting the bottle of 2002 Marques de Murrieta Reserva Rioja that our friend had brought.

The Grill’s menu is pretty simple. A few salads and starters, several different cuts of steak, seasonal seafood, and a single souffle for dessert. There was a prix fixe option which featured lobster bisque, a choice of entrees, and the souffle for on $49, but we opted to order by plate. Our first course was a spinach salad ($15.25) served with a fried wedge of brie and slices of pear. We split the salad because we wanted to save room for the main course.

According to the chef, all of the beef at The Grill on the Alley is prime, grain fed beef from Iowa. They are seasoned simply with salt, pepper, and granulated garlic. Then the chef tosses them on a grill under a 1300*F broiler for a few minutes to get a really good crust on the steak. They are then finished under another broiler until the steaks reach the desired doneness.

Annie got the 16 oz New York Strip Pepper Steak ($45.50). It came loaded with bacon bits and cracked black peppercorns. The bacon provided some fat (flavor!) to the lean strip, and the peppercorns gave a really nice, spicy bite. 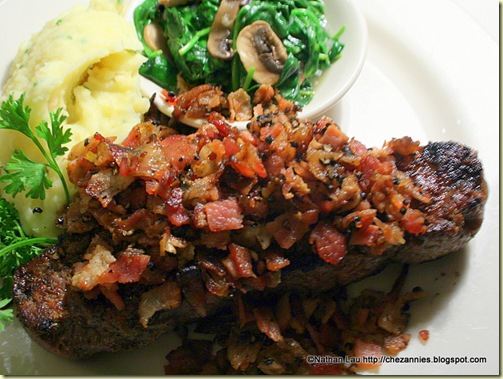 (please excuse the shaky photos. The lighting in the restaurant, as with most steakhouses, is pretty muted.)

The steak was a perfect medium rare. Just the way I like it. (If you are one of those folks who eat their steak well done ie. cooked to death, please don’t tell me. I may never speak to you again!)

Look at that steak. Isn’t it beautiful? 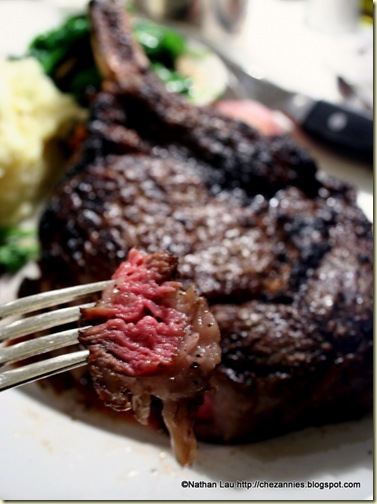 I put that first piece in my mouth, and suddenly I had a transcendent moment. You know the scene in "Ratatouille" when Anton Ego takes that first bite of Remy’s confit biyaldi and is suddenly transported back to his mother’s kitchen? It was something like that. I was stunned. Taken to a different level. Angels sang (okay, well that might be overdoing it)!

The Grill on the Alley is probably the best restaurant steak I’ve had. Maxim’s (formerly Max’s) in west San Jose is the next closest restaurant I can think of. Our friend says that Alexander’s Steak House in Cupertino is a close second for him. It’s all about the quality of the meat, and the care taken in cooking it.

I asked the chef whether he prefers cooking over coals or gas. He says that gas is very convenient and consistent. But he personally prefers to grill over coals. I would agree. If there was anything missing from these steaks at The Grill on the Alley, it would be the distinctive smoke flavor of cooking over coals.

Save Room for Dessert

We had ordered the chocolate souffle for dessert but at the middle of dinner we changed it to the Grand Marnier souffle ($10) instead. It was very good, especially with the warm, Grand Marnier-spiked cream. Only thing, I would have liked some orange zest inside the souffle, to mirror the orange-flavored liqueur.

Grand Marnier Souffle at The Grill on the Alley (San Jose) 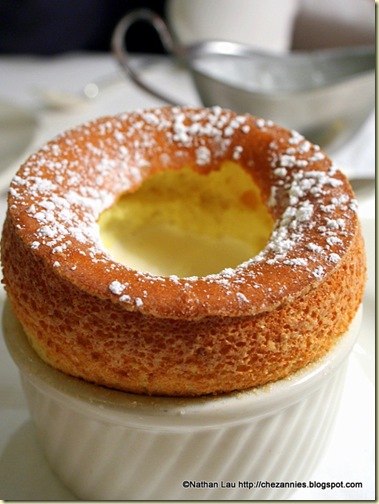 The Grill on the Alley is not an everyday place to eat unless you have an expense account. But for a special occasion, especially when you’re feeling like a gourmet carnivore, this restaurant should be at the top of your list.

8 thoughts on “The Grill on the Alley (San Jose)”