Do you have a lurking turkey? You know, the spare one you bought on sale around Thanksgiving time ’cause it was dirt cheap, and you figured you could use it “sometime later”. But of course, you forgot all about it sitting there behind the two dozen other things you’ve stuffed in the freezer since then.

Yeah, I had one of those. Two of ’em, actually. (We have a big freezer in the garage.) I needed to make some space in the freezer, so I decided to smoke one of the turkeys.

(And dang, did that sucker make a huge blunt!)

Just kidding. By smoking, I mean instead of heating up the kitchen with a hot oven, I would cook the turkey outside using my Weber Smokey Mountain water smoker. So I defrosted one of the turkeys and then spatchcocked it. “Spatchcocked”? Ooh, sounds naughty!

Perhaps a little explanation is called for. Simply put, a “spatchcocked” bird is one that is butterflied – it has had its backbone and keel bone removed so that it can be flattened out. Its chief benefit is that a flattened bird will cook faster and more evenly than a carcass left whole. There’s a good video by Chris Allingham of The Virtual Weber Bullet showing how to butterfly a chicken over on YouTube. Butterflying a turkey takes a bit more work, but the concept and steps are essentially the same.

I normally brine my turkeys using Alton Brown’s brine recipe before roasting, as this keeps the birds juicy during the long cook in the oven. But since these birds were the “enhanced” type that were already brined before freezing, there was no need to brine again. Instead, I used the rub and injection recipe from Barbecue University to flavor the turkey.

*Note: I find that rubbing seasoning on the outside of a bird is just messy and doesn’t let all the flavor penetrate to the meat. Instead of rubbing the seasoning on top of the skin, I carefully separate the skin from the meat and smear the seasoning underneath the skin.

I set the Weber Smokey Mountain up with a couple of chimneys full of lump charcoal and a log of cherry wood for smoke flavor. The turkey went on the top grate of the WSM, which was running at about 300*F in the dome. 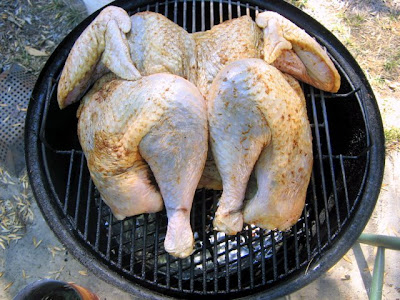 I monitored the temperature through a remote probe thermometer inserted into the breast. After about 2.5 hours, the temp in the breast hit 165*F and I pulled it out of the smoker. I moved the turkey to a pan, covered it in foil, and took it inside to give it time to rest. 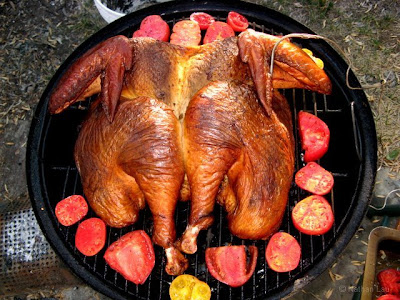 As with most of smoked turkeys I’ve done, the skin was rubbery and inedible. You have peel it off and toss it. (See, that’s why you want to rub the seasoning under the skin instead of on top!) The seasoning rub was pretty flavorful. However the injection didn’t permeate the breast – it mostly stayed in the channel that the needle made.

Dinner was smoked turkey, mashed potatoes and gravy, and a side of steam-fried broccoli with garlic, shallots, and pine nuts. I just love that extra “ohhh, mmmm” factor that food cooked over charcoal gives! 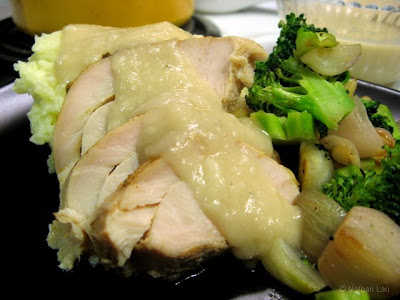 So, what are YOU going to do with your lurking turkey?