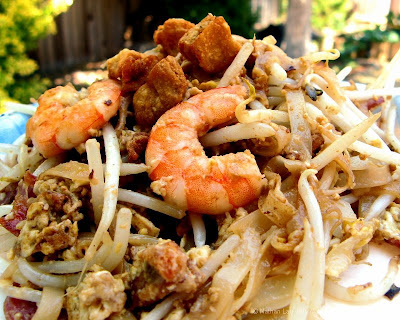 Even though I’m from Kuala Lumpur and lived there most of my life, I very seldom ate Char Koay Teow there. I’m pretty picky about my CKT. There is a simple reason for that: my dad hails from Penang. ‘Nuff said!

Ok, I’ll elaborate for those not in the know.

I’m sure there will be some who will challenge my opinion, but I really think that, outside of Penang, there are very few good Char Koay Teows to be had. When I was living in KL, it didn’t matter that I went many months without eating CKT because I knew that a trip to visit relatives in Penang was always on the horizon. I would soon be able to get my fix. 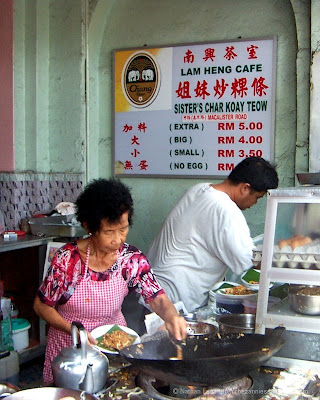 Now that I am living in California, I miss eating Char Koay Teow quite a bit. So here is my “make-do” recipe for CKT while I am far away from the really good stuff. It’s a decent recipe that I’ve added a few tweaks to so that the flavors stand out more.

Some tips that I have discovered along the way: 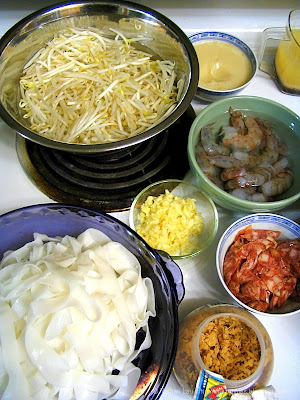 Alright, on to the recipe:

feeds about 6 adults
Ingredients:
½ cup lard
1 head of garlic, minced
6 tsp preserved cabbage
½ lb of medium-large shrimp (I normally use 26-30 count and allocate about 3-4 per person)
2 chinese sausages (lup cheong), sliced thin on a bias
1.5 lbs of medium-width rice noodles, loosened. Here in San Jose, we can find them at the Asian grocery store, sold in trays, freshly made. If you really cannot find fresh noodles, I believe that dry pho noodles can be used as a substitute… but they just won’t taste as good.
6 eggs, or more if you like it more eggy
8 oz bag of bean sprouts
6 tsp Sriracha chili sauce (optional)
12 Tbsp CKT sauce (see recipe below)

(Some people like cockles in their CKT, but I don’t. Others prefer crab meat. Tell me your favorite CKT ingredient!)

Work quickly and in individual batches. 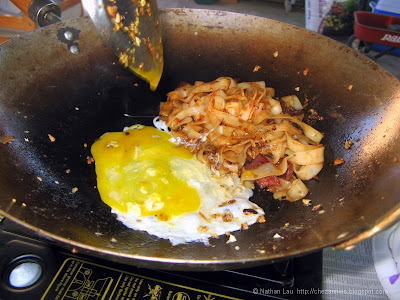 If you’re a kind (read: sneaky) host, pass on the plated Char Koay Teow to someone else and continue cooking. Trust me, the best plate will be the last one (the wok will get more and more seasoned as you cook and the later dishes will take on a more smoky flavor).

Here’s a video we made of the process. NOTE: This video was of the last batch being cooked, when we had barely enough koay teow noodles but a whole lot of bean sprouts!

See how quick that was? Eating it is just as quick, if not quicker.

Put all ingredients into a bowl and stir until the sugar and oyster sauce has dissolved into the other liquid ingredients.