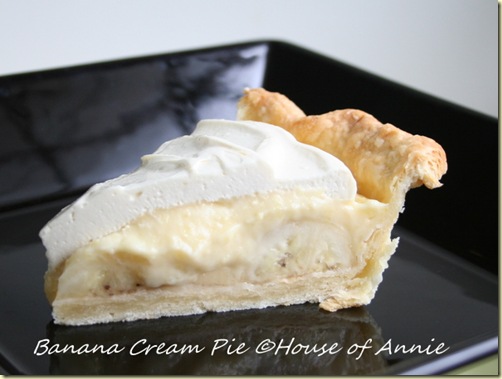 I love, love, love pies! There’s something about crust filled with yummy things that just appeal to me (to the cost of my hips). When I first came to the US, I was amazed by the variety of pies and I just couldn’t get enough of them.

I discovered banana cream pie when an acquaintance who attended the Hawaii Writing Project with me brought them one day to share. They were so delightful that I had to get the recipe. She generously shared it with me.

I baked this banana cream pie recently because I’m testing out the microwave/convection oven that came with our house. I figured if the crust didn’t turn out, it wouldn’t be as big a loss as a whole cake. From my research into other similar types ovens plus all the help I had gotten from some of you, I plunged ahead with this pie as my first bake.

And it turned out pretty good despite the oven not coming with any manual at all. The crust did bake up brown but I think I still need to work out the timing and temps a bit more to get it perfect. For a first attempt, I was quite happy.

I also chose to bake a banana cream pie because I am now in a land of plentiful bananas. Local bananas are so varied and delicious that we are eating a bunch or two a week. For this pie, I used Pisang Rastali/Kering, a banana that is very similar to the apple bananas you find in Hawaii. They are creamy but have a slight tart apple finish. Simply delicious—my absolute favorite variety!

The first time I tried to bake a banana cream pie, I must have had beginner’s luck because everything turned out really well. There have been a few times since then that the egg paste curdled when I mixed it into the milk. I suspect that the milk was too hot when I added the egg yolks (I get impatient and crank up the heat sometimes) and that is what caused the curdling. So make sure you keep the heat on the milk low when you’re adding the egg paste. Don’t let the milk come to a boil! But if you do get some curdling, all is not lost—just strain the pudding before filling the pie.

The recipe for the crust makes a really flaky and tender crust. It’s not the most flavorful crust because it doesn’t have any butter in it. But since the banana and the pudding is very flavorful already, this crust is a nice complement. If you want more flavor, feel free to substitute butter for the shortening, but you will lose the flaky texture you get from the shortening. Maybe next time, I will try it with half butter and half shortening. Anyway, if you are making this dough as it is written, be sure to chill the dough first so that the crust won’t shrink back too much while baking.

This recipe bakes up enough crust and filling to make two pies. And I recommend making two as they disappear very quickly. I served this at a church small group meeting and when the evening was done, I only had a quarter of one pie left to take home as leftovers. 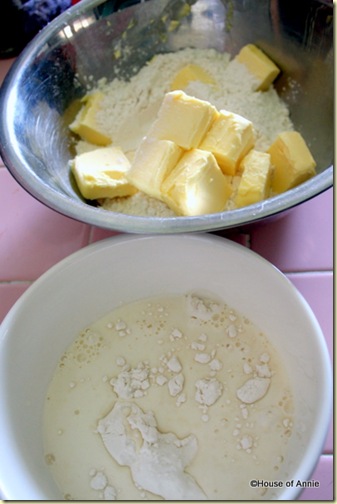 Pie Crust Method:
1. Rub ingredients A together to form a shaggy dough in a medium bowl. Yes, I know it’s quite a bit of fat but you can always add more flour later if it’s too wet. It’s the fat that makes this pie crust flaky and tender.
2. Mix ingredients B together to form a paste in another bowl.
3. Add B to A and mix gently with a spatula until it forms a dough. If it’s too wet, add more flour to the dough to get a nice soft dough. Don’t overwork the dough; the crust will be more tender and flaky the less it is worked. 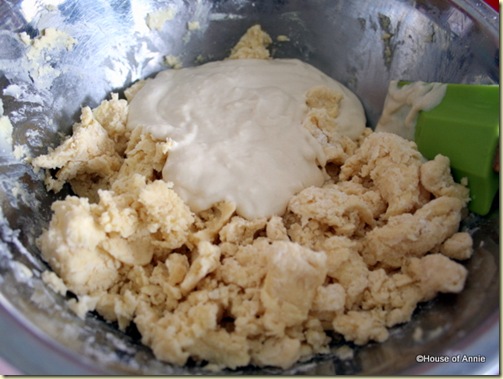 4. Form two balls, cover them in plastic wrap and chill in the fridge for at least an hour. 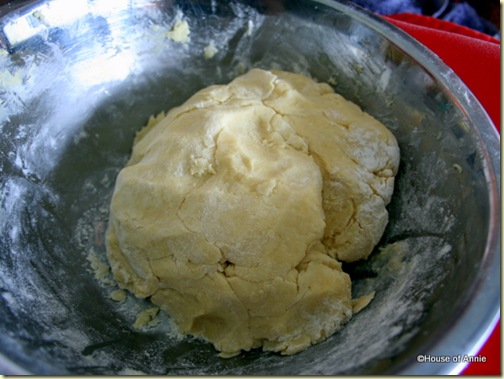 5. Preheat oven to 400 F (210 C).
6. Roll out your dough into a round, about 1/8 inch thick, dusting with flour to keep it from sticking. Place dough rounds on your pie pan and press into pan and crimp edges to the side of the pan. Dock with a fork all around the crust. 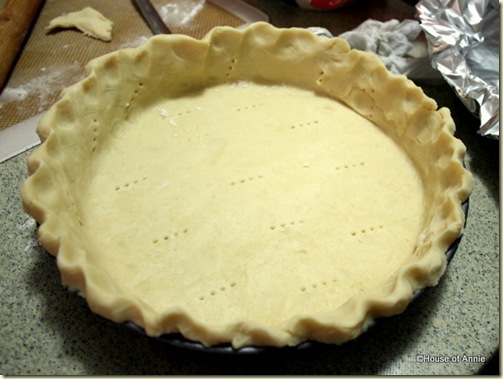 Pudding method:
1. Heat on stove 4 cups milk and 1/2 cup butter over med-low heat in large sauce pan.
2. Mix in another bowl the sugar, flour, salt and yolks. Add to this mixture enough milk from the sauce pan to make a paste.
3. Add paste to milk/butter mixture on stove. Make sure the milk mixture is not too hot when adding the paste or the eggs will curdle. Whisk mixture constantly over med-low heat until the mixture thickens and comes to a boil.
4. Remove from heat immediately and stir in vanilla essence. Let it cool slightly. If you want a smoother pudding, strain it so that the bits of cooked egg will be strained out. 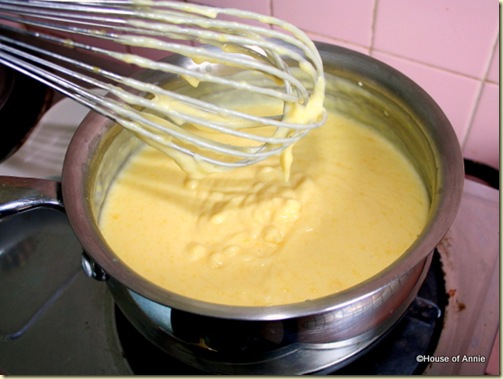 To assemble banana cream pie:
1. Slice 5-8 bananas (depending on size of bananas) in half length-wise. You can choose to slice them into rounds but I find that the pie slices hold better when you slice in half and lay them in circles around the crust. Cut as needed to fit all the bananas into the bottom of the pie crust. 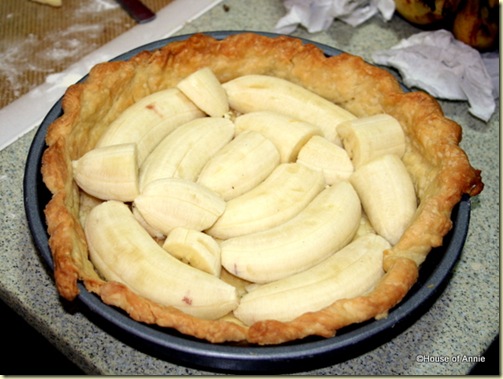 2. Pour warm pudding over bananas until the bananas are covered and the pudding is almost at the top of the crust. 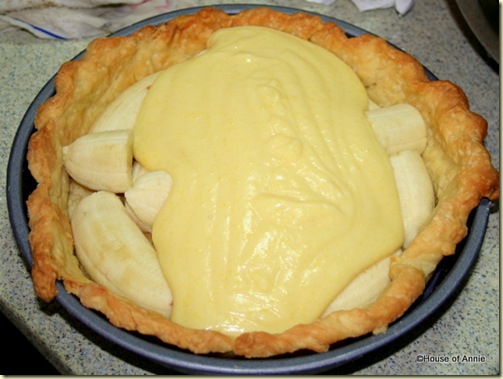 3. Cool in refrigerator until set, about 2-3 hours.
4. Just before serving, whip some heavy cream (about 1/2-1 cup depending on how much whipped cream you like), with 2 Tbsp sugar and 1/2 tsp vanilla. Spread whipped cream over pie. 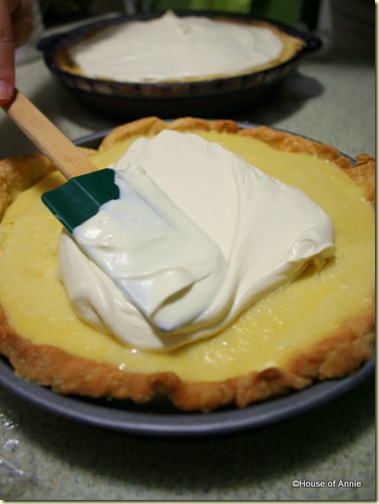 5. Slice into wedges and enjoy! 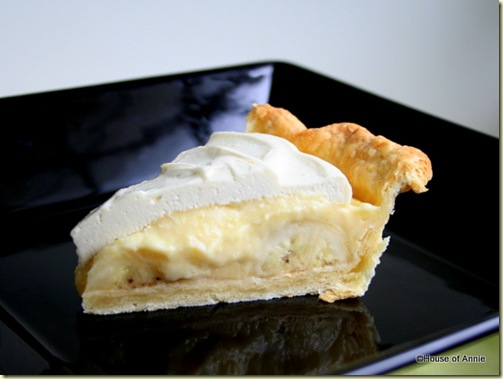