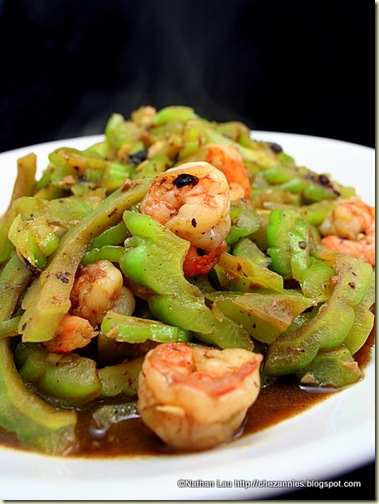 Remember how when you were a kid, you would turn your nose up at anything that was weird looking or nasty tasting? Well, my nemesis was bittermelon (bittergourd). My mom would cook bittermelon every so often either in a stirfry or in soups and insist we eat it because "it’s good for you!" (How many times have you heard that?)

You come to realize that that phrase is a code word for "it’s not going to taste very good." I remember pinching my nose closed and chewing that bittermelon as fast as I could or drinking up the soup in one gulp to get it over with (all the while, my mom would be watching to make sure we weren’t wasting any).

Well, my tastebuds must have matured because I find the taste of bittermelons quite pleasing now. And I will willingly eat it every so often! I still can’t imagine making them into soups (bittermelon soup was the most nasty of all) but in a stir fry with other flavors, bittermelon actually tastes good–a nice salty, savory flavor with a lingering bitterness at the end.

Pick the Right One

My mom tells me that you have to know how to choose your bittermelons/bittergourds. If you choose the wrong ones, they will be very bitter. She tells me that you have to look for ones with fewer ridges, look more smooth and are a lighter green. Another trick I learned is after you’ve sliced it, you want to salt it to make it less bitter. Don’t forget to wash the salt off before cooking!

Of course, we are talking about the Chinese bittermelons that you find in the Asian grocery stores. If you walk into any Indian grocery stores, their bittermelons are very different and I don’t know how to choose those. They are smaller and have tons of ridges and I’ve heard that they are really, really bitter in flavor. I cannot say as I’ve never had them myself personally. If you have eaten these varieties, would you tell me about them? 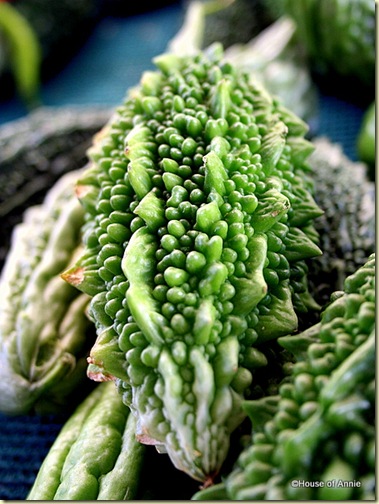 1. Heat up saute pan or wok and add the oil. Once the oil is shimmering, throw in garlic and saute on medium heat quickly for 30 seconds or until lightly browned (it will start to smell yummy).
2. Throw in the shrimp and a pinch of salt and saute till just losing its translucent color on both sides.
3. Add bittermelon and saute for a minute on medium-high heat. 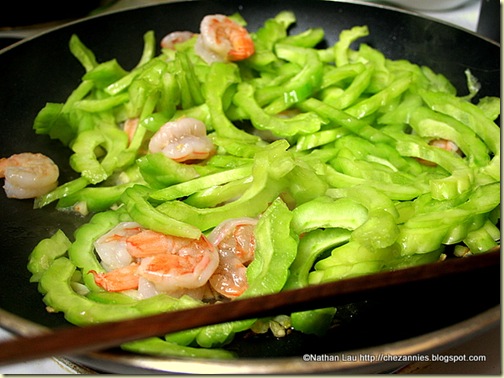 4. Add the black bean garlic sauce and the water and stir to mix. Add sugar and fish sauce to taste and cook till the bittermelon is tender, about another 2-4 minutes. 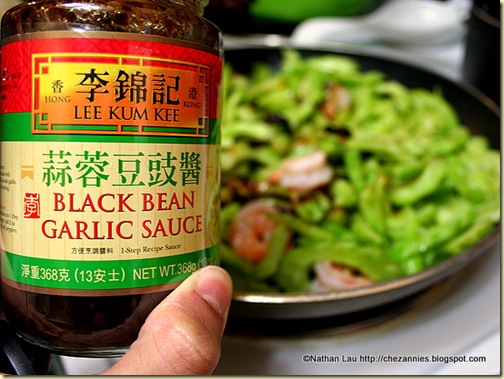 20 thoughts on “Bittermelon and Shrimp in Black Bean Sauce”