You guys know about our favorite fishmonger in the whole world right? His name is Pat and he runs Mission Fresh Fish out in San Leandro. You can find him at several farmer’s markets around the Bay Area. We’ve talked about him a lot on this blog. See, his fish is truly the best I’ve come across. And this is one of the things I get the most from him—salmon collars.

Salmon Collars – Cut From Right Behind the Gills 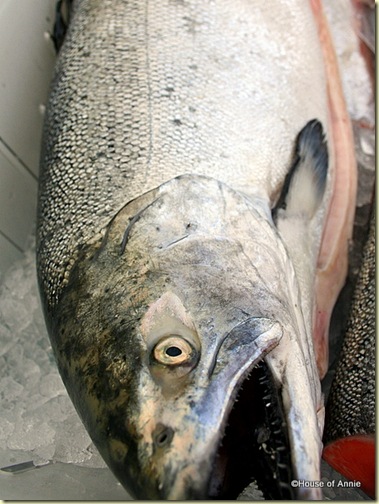 I first came to know of salmon collars when I started visiting Pat’s booth at the Saratoga Farmer’s Market. The salmon collars were packed in ziplock bags and put next to all the fish bones and other ‘scraps’ leftover from his filleted fish. One of his staff recommended the salmon collars to me as the cheaper alternative to buying his salmon fillets. They told me that it was just as delicious if not more because of all the fat on it. So much fat, it’s almost like having salmon toro!

Get the Right Kind of Salmon

So I came back home that first time with a bag or two of the salmon collars and prepared them as they said—just salt and pepper it then broil. And it was the most delicious thing. This is when I had my epiphany. Salmon can taste so amazing when youget the right kind. And this was the right kind—wild King Salmon. I cannot go back to any store bought salmon anymore (the variety of salmon really counts and King Salmon is truly KING among the salmons).

And Pat sells his salmon collars at the most reasonable price. Would you believe that he charges only $4/lb for these salmon collars? Yes, you heard me right—only $4/lb. These days, when I go to get them, I come back with at least 5-8 lbs each time. I freeze them in bags and go through them in about 2 weeks.

Prepping the salmon collars is so easy. I just cut each salmon collar into three parts—the two side fin parts and I’m left with one small steak piece.

Three Pieces of the Salmon Collar 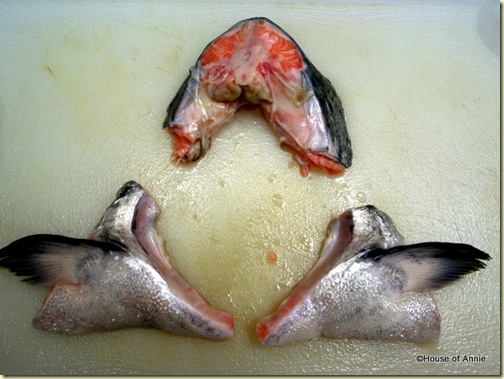 I lay them all out on a baking tray (wrap the tray in foil for even easier clean up) and salt them with kosher salt and freshly ground black pepper on both sides. 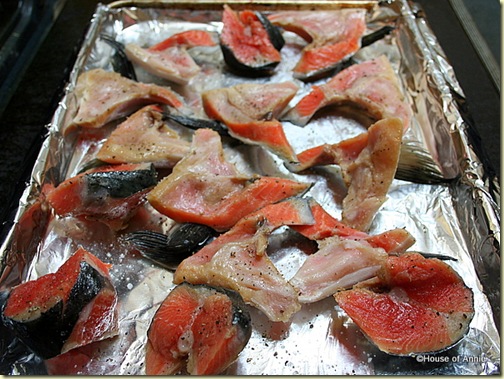 If you want them to taste more intense, leave the salt on for about 30 minutes before you broil the salmon. This technique is the Japanese way of cooking fish “shioyaki” style. And it’s really delicious.

I once made this dish for a catered dinner and someone asked me what I had seasoned the fish with. She could not believe that all it was was salt and pepper. It’s the fish, people! If it’s good fish, it tastes so good that you don’t really need anything else. Plus, salt done right can be the most amazing flavor component. You don’t need much of anything else.

I then turn my oven to broil and set the rack at the highest level, closest to the broiler. Pop in the fish, leave the oven door slightly ajar and set the timer for 7 minutes (please check on yours as different ovens have different broiler intensities—I did this at a friend’s house once and it browned a lot faster). Basically, you want the fish to brown and get some nice charring (not burning!) before flipping them over.

Once the timer beeps, turn fish over and broil for another 6-7 minutes (normally shorter time because fish is warm and oven has gotten hot too) or until it is a nice golden brown with bits of darker charred color. 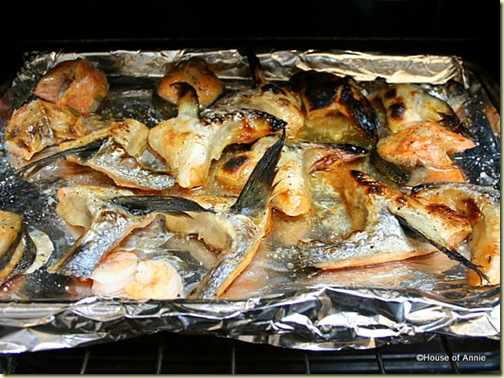 Remove from oven. Plate up and make a pig of yourself sucking up the succulent fish and all that tasty, oily yumminess! 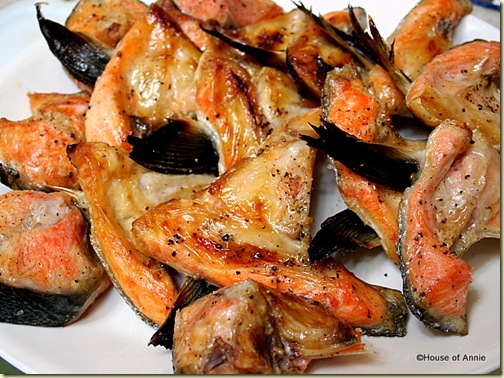 If you’ve never had salmon collars, you need to make a point to get yourself to your nearest fishmonger and ask them for it. If you’re in the Bay Area, find out which farmer’s market Pat is at that is closest to you. Just don’t buy him out—save some for me! Don’t forget—Wild King Salmon is the way to go. Everything else just doesn’t come close. 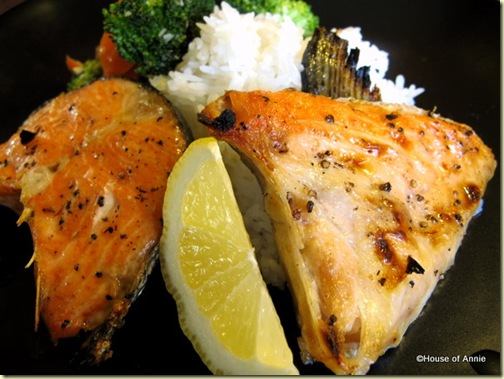