We went to Sakae Sushi in Burlingame, CA to celebrate Annie’s birthday with some of the best sushi in the Bay Area. In Part 1, we talked about all the great sashimi we had. Now it’s time to talk sushi…nigiri sushi.

When most Americans think of sushi, they think of California rolls, Caterpillar rolls, Dragon rolls, etc. You know, a tube of rice and relatively small pieces of fish mixed with the likes of cucumber, avocado, fake crab, cream cheese, mayonnaise, you name it. Sometimes it’s even drizzled with a sweet sauce. It’s basically a way to avoid tasting raw fish, which I guess is not big with the Western palate. (No wonder I see a lot of people absolutely drown their sushi in soy sauce and horseradish!)

Japanese do eat rolled sushi (called maki) but they don’t tend to hide the fish. Nigiri sushi puts that fish right on top. And that’s the way we like it! 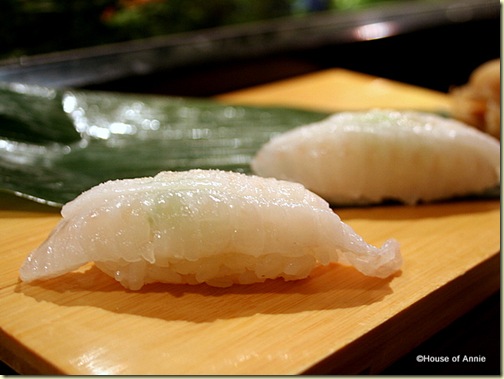 Halibut is one of our favorite fishes for sushi. But this is not your normal halibut fillet cut. The meat is taken from around the fin area of the fish instead. It is very thinly sliced (can you see the dab of wasabi underneath the fish?) and has a slightly firmer texture. He seasoned it with a few drops of lime and sprinkles of salt. It was good, but I thought he was a mite too heavy with the salt. 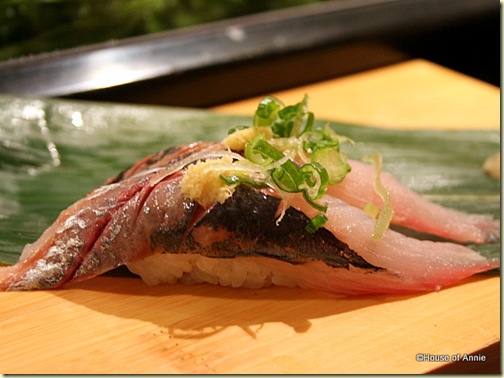 We’ve had some pretty good aji (mackerel) sushi in our time. This is “seki aji”, premium mackerel from Kyushu. Mackerel has a really strong, almost bitter flavor if you don’t prepare it right. The skill of the chef really comes into play here. He has to know the fish’s characteristics and how to best marinate / prepare it in order to bring out all the best flavors. Here, it is served with chopped green onion and minced ginger. Perfect! 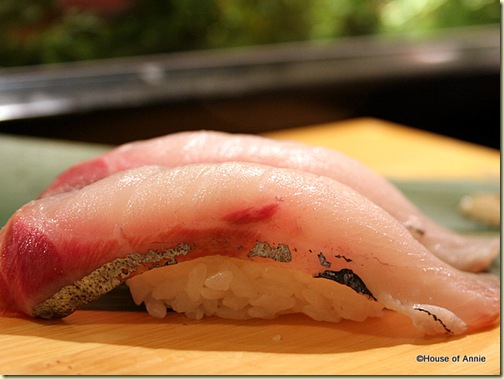 This fish is called “Shima aji”, or striped jackfish. It has a more delicate flavor than the mackerel. No need for stronger garnishes like ginger or green onion.

The Most Important Element in Sushi

I want to point out here the rice ball underneath the fish. You may think that the fish is the most important component in sushi. Not true. Our old friend and sushi chef Ryo used to say that fresh fish is just the minimum requirement to good sushi.

The rice (or shari) is actually the most important element in sushi. It is the base on which you build great sushi. The rice must be able to hold together in one ball, yet break apart into individual grains in your mouth. It must be able to absorb the sweet vinegar dressing yet not turn into a sticky mush. If made right, the rice and the fish will actually hold together, even if turned upside-down.

You can’t just put any old rice in a steamer, push the button, and expect good sushi rice to come out. It takes skill and experience to know how to make good sushi rice. Respect the rice maker! 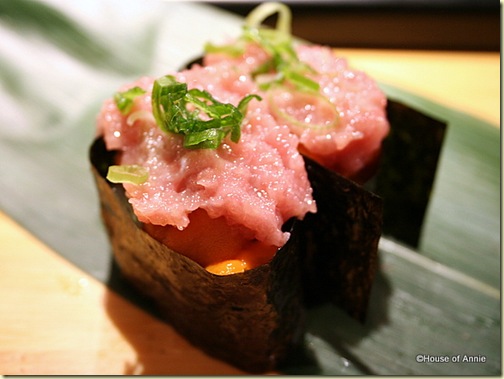 When we first started getting into good sushi, we believed that toro, the fatty cut of tuna, was the ultimate cut. Little did we know that there are different grades of fatty tuna. Otoro, the fattiest of them all, will literally melt in your mouth.

The same with really fresh uni (sea urchin roe). Our sushi chef had already given us uni on our crab, salmon and scallop sashimi. We noticed he pulled out a different tray of uni for this one. These uni were about half the size of the Santa Barbara uni we had earlier. I didn’t ask their origin, but I surmise that these were actually from Japan.

When he set this “gunkan maki” sushi down, our chef said that there was no name for this creation. He just made it up. “I call it ‘King Sushi!’” he laughed.

An appropriate name. We put that sushi in our mouths and chomped down. The minced otoro and the unijust melted away and gooshed all over. WOW. Simply amazing. 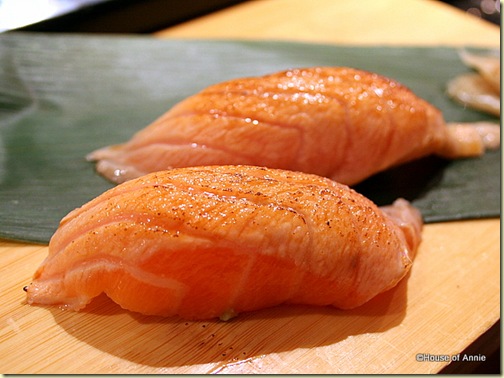 Everytime we’ve gone to Akane Sushi in Los Altos, they’ve made us a pair of torched salmon nigiri. At first I thought it was a novelty, but wasn’t really impressed with the flavor. When we saw our chef pulling out the torch again for this salmon sushi, we balked.

“We’ve had this torched salmon before at another restaurant, and didn’t like it. Which do you like better, torched or not?”

“I like it torched. It melts the fat and brings it out of the fish.”

We savored the salmon sushi. “Wow, this is good! I like it! What’s different?’

“You have to marinate the salmon first for three hours to get rid of the fishiness. Then it won’t be so fishy when the fat melts out.”

Taking a Break, Making Some Friends

We were well into the meal and feeling fine. The restaurant was full of customers, so our chef was pretty busy filling orders. We were content to sit back for a while and take a break.

The couple sitting next to us at the bar struck up a conversation. The husband, Eric, opened with “I notice you’re taking pictures of all your dishes. Are you a food blogger or are you just taking pics for yourselves?”

Hee hee. Good question! I handed him one of our Foodbuzz Featured Publisher cards. This started a very pleasant conversation.

It turns out that Eric and his wife Angela also have a food blog, tastebound.com, which chronicled their eating adventures while Eric was studying in Sydney, Australia. Unfortunately, life got in the way and they haven’t blogged since 2007.

But they recently moved to the Bay Area to work, and are now living in San Francisco, one of the foodiest food cities in the world. We gave them some suggestions for places to eat like Zuni Cafe and Hog Island Oysters. Hopefully, they will begin to chronicle their foodie adventures once more.

Back to the Action

After the break, our chef asked us if we still wanted more sushi. We asked him if there was any fish that we hadn’t tried yet. He looked over the fish in the case before us. “I think I’ve given you all the fish.”

Oh. But then we noticed that he took a block of something out from the fridge below the counter. What was that? It looked like fish. But there were streaks of fat throughout the meat that made up almost half of the block.

Ohmigosh. That isn’t…? “I think that’s Kobe beef!” I whispered to Annie. I took out my Flip video camera which I had won from Jaden so many months ago (but hadn’t seen much action lately). Similar to my Slicing Salmon Sashimi video, I took a vid of the Kobe Beef Sushi making action:

and here’s the end result: 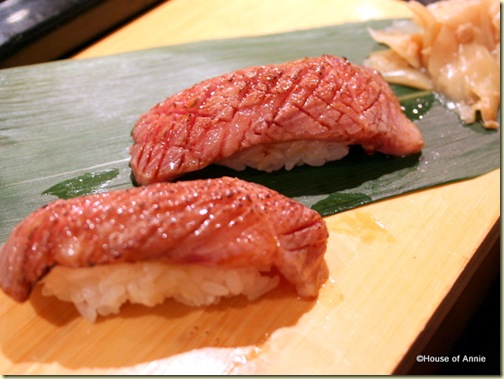 I think this was the first time I’ve ever had Kobe beef. It’s such an expensive meat that I just couldn’t imagine buying it. In fact, this is probably the most expensive pair of sushi ever.

But it was goooood. Even though the Kobe beef was just lightly seared on the outside and still raw on the inside, it was as tender as can be because of all that intramuscular fat. We had no trouble eating this at all! 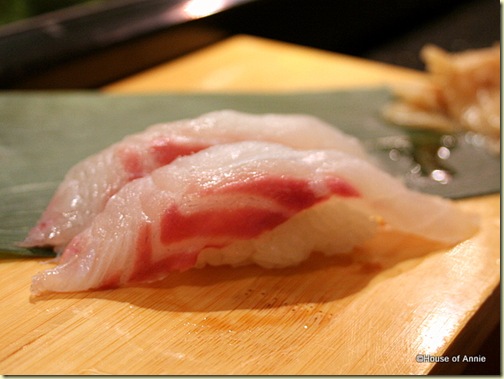 That Kobe beef sushi should have been it. It was the pinnacle of an exceptional meal. I should have stopped there. But no. I got greedy.

Our chef hadn’t given us tai (snapper) and I wanted to compare it to what I enjoyed at Akane in Los Altos. So I asked him to make a tai nigiri for me.

He had to pull the tai out of the fridge under the counter. Then he served it without a piece of shiso leaf like they do at Akane. So I was disappointed, both because the fish itself was not the right temperature, and also because there wasn’t any shiso. But it’s all my fault. I should have just trusted the chef to give me only the best. 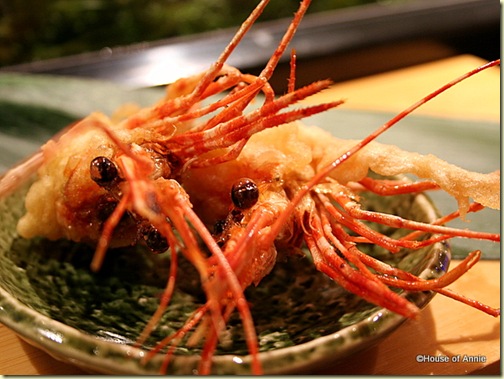 All night, I had been watching the chef make sashimi platters which included amaebi, or sweet shrimp. He’d also include the raw heads of the shrimp on the platter. I wanted some deep fried amaebi heads.

So I asked the chef if I could get some deep fried shrimp heads. He didn’t have any more shrimp in the case, but he told me wait. “We have some in the back.”

Sure enough, a few minutes later, this plate of deep fried shrimp heads arrived. They were piping hot out of the oil. Their legs and antennae were like thin, crispy shrimp crackers. The heads are a little more substantial. You bite into them and you get this complex, savory taste that is unmistakably shrimp-dilly-ishous! We ate everything.

We were done. It was getting late and we had to get back to reality and go pick up the kids before heading home. We asked for the bill.

Our chef didn’t actually know how much the bill would come out to. He only wrote down what fish we ate and let the waitress calculate the bill. When he found out how much it was, he was shocked.

We weren’t. After many times of eating high quality sushi at Ryo’s Sushi-Man, we knew to expect a hefty price tag. Not only were we paying for the freshest, highest quality fish, we were also paying for the skill and creativity of the chef preparing that fish for us.

So here’s our dilemma – once we’ve had sushi of this caliber, how can we go back? No way we’re going to any sushi boat-type restaurant ever again. We’re spoiled for good sushi!

Do We Have a Winner?

There’s no doubt that Sakae Sushi is one of the best sushi restaurants in the Bay Area. The quality of the fish is excellent. The skill and creativity of the chef is at a high level. But remember that there was something more that we were looking for.

We were looking for that chef connection. The same way we connected with Ryo. Where he was more than a chef, but a friend.

We didn’t feel a strong connection with our chef that night. “Seki” was quite new to the restaurant, having been there only one month. The old-time chefs at Sakae, Hiro and Jun, must have been working at Sakae’s new sister restaurant, Noboru, which had just opened up recently.

“Seki” was pretty much fresh-of-the-jet from Tokyo. While his sushi-making skills are undoubtedly top-notch, his English skills need work. So we have a very basic communication issue.

Which leaves us with another dilemma – should we try out the sushi bar at Noboru where the chefs there would be easier to converse with, or stay with “Seki” at Sakae? Suffice to say, we’ve found a great sushi restaurant, but not one that we could become “regulars” at. The search continues.