Saturday was Annie’s birthday, and we wanted to go out for a special sushi meal to celebrate the occasion. We had talked about going back to see our favorite sushi chef, Ryo of Sushi-Man in San Francisco. But Ryo was tragically killed in January, and we were left looking for a restaurant worthy to replace the high quality of sushi and service that Ryo gave to us.

In recent months, we had been going to Akane in Los Altos to get our sushi fix because it was closer to us, was more affordable, and served some pretty high quality sushi there. We found this place on the “Big List of Peninsula Sushi”, where Akane came in at #2. #1 on the list? Sakae Sushi in Burlingame. 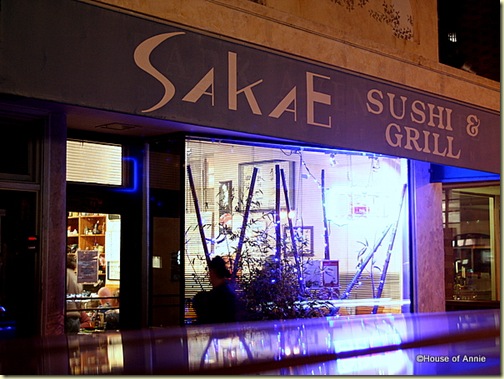 I made reservations at the bar for the two of us on Saturday night. We knew we were going to get top quality fish, so we had no problems going omakase. But would we make a connection with the chef, as we did with Ryo?

Sakae Sushi is located in downtown Burlingame. It looks just like a neighborhood sushi joint. Not too flashy, but comfortable. When we arrived, most of the tables were filled with customers but our reserved seats at the bar were right in front of the sushi chef. 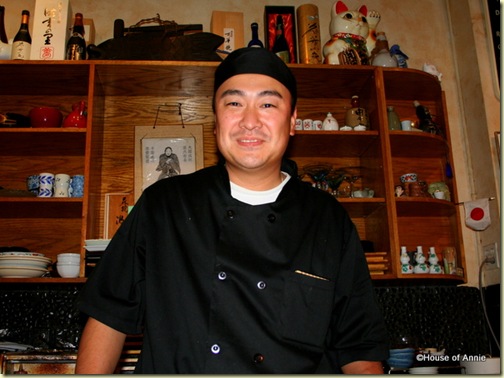 Only, this chef didn’t look like either the owner, Hiro or the sushi chef Jun, as advertised on the restaurant’s website. This guy was new. At least he seemed competent at his station. We watched him put together a rather delicious looking sashimi platter for some other customers. Then he turned to us.

“What do you want tonight?” he asked politely.

“Omakase? That means I choose, yes?” he said, pointing to himself.

“Yes, we trust you. Please give us your best.”

At that point, he smiled and began to work.

(I have to point out that there actually were a couple of items on the whiteboard menu up on the wall called “omakase”. But I suspect that these are treated more like special set sushi or sashimi platters rather than a true “chef’s choice”, non-set-menu dinner. That’s probably why he needed to confirm that it really was his choice.) 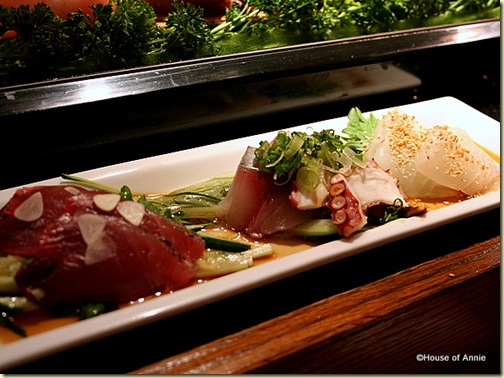 Our first course was a sashimi platter. On the left is bonito garnished with thin slices of raw garlic. The chef described it as coming from Shikoku island, not mainland style. In the middle are seki saba (mackerel) from Kyushu and also tako (octopus), garnished with green onions. On the right is hirame (halibut) that is garnished with minced toasted sesame seeds. The bonito with the raw garlic was surprisingly good. Annie thought that the sesame on the halibut really makes the dish. 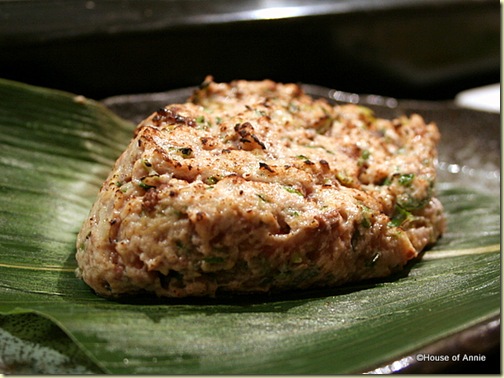 As we were working through the first platter, the chef minced a small pile of wild winter buri (yellowtail) into a paste, then combined it with miso and minced green onion. Then he took a propane torch and seared the outside of the paste for a few seconds, leaving the inside still raw. He said that this style came from Chiba County, near Narita airport The flavor was just amazing.

Salmon, Scallop and Uni Sashimi Platter at Sakae in Burlingame 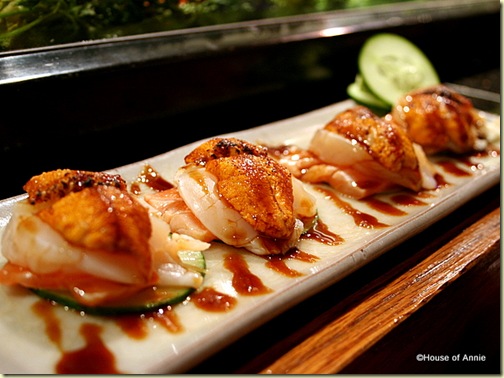 Our final sashimi platter was this beautiful creation. Thinly sliced cucumber on the bottom, a dollop of crab salad in the middle. Small slice of sake (salmon) followed by a nice portion of hotate (scallop) on top of that. Then, the pièce de résistance– fresh Santa Barbara uni (sea urchin roe). He drizzled lines of sweet sauce on top of that and then torched the whole thing again with his propane burner.

I have never seen anything like it before. The taste? Out of this world. We normally don’t like uni because it can be too fishy. But this uni had no fishiness to it. It just melted away as soon as you put it into your mouth. Combined with the crisp cucumber, firm scallop and creamy crab salad, it made for a delicious textural experience. The only thing we didn’t like was that the sauce was a little too sweet.

Of course, we weren’t at Sakae for just sashimi. We were here for the sushi, and by that we don’t mean California Rolls, Caterpillar Rolls, or any other kind of Americanized “gateway” to raw fish. We’re hard core, baby! Bring on the nigiri!