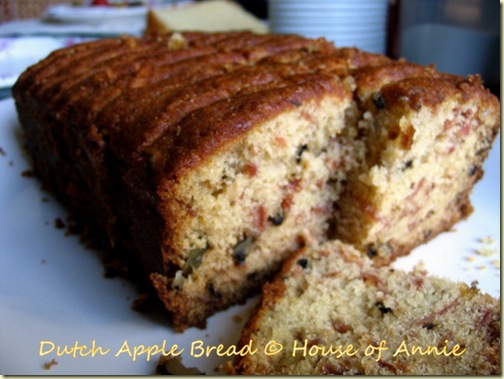 Several Thanksgivings ago, a friend, Andrew, made this fabulous Dutch Apple Bread and shared it at a church dinner. It was so simple looking but on that cold evening, with the bread still warm from the oven, it was a total hit. The bread was moist, hearty and infused with apple flavor. It was comfort dessert at its best.

I ate a slice and it stayed in my memory for days. I love homey cakes and quick breads without the frills of adornment especially when the flavors satisfy every craving I have. And it’s not just the flavor, it’s the texture and the simplicity of good ingredients that make it so memorable for me.

So I talked to Andrew about the bread (it is really more like a cake) and in our conversation he mentioned that he had gotten this recipe from a cookbook called “More With Less” by Doris Janzen Longacre. Our conversation left me intrigued about the cookbook and even though I had asked him to email the recipe to me, I had to look the cookbook up in my local library. Lo and behold, they actually had a copy and I ended up getting the book before he had sent me the recipe!

This cookbook is a real treasure. It’s not flashy and it doesn’t have pictures but the recipes in this book are truly comfort foods that use everyday ingredients. For an older cookbook, this is one that is classic and is not dated at all. Her ideas and philosophy are as relevant today as it was then.

I flipped through the cookbook and quickly found this recipe. Even though Andrew had not told me the name of the bread, I surmised from reading the recipe that this was the one. The only thing that stumped me was the sour milk in the ingredients list.

I didn’t quite know what “sour milk” meant. And even though the author gave a substitute suggestion, I really wanted to use the sour milk. So I emailed Andrew and asked what he did. He told me that he usually just put in a teaspoon of vinegar into warm milk and let it curdle. So I did just that and it worked out great (my technique was to put the vinegar into cold milk, stick it into the microwave for about a minute and – tadah – curdled milk!).

The only other thing I changed around was the margarine (I used butter instead). And instead of chopping the apples, I went with Andrew’s suggestion of putting the apples through a large-hole box grater. The bread was really easy to make and most of the ingredients I easily had available in my pantry. 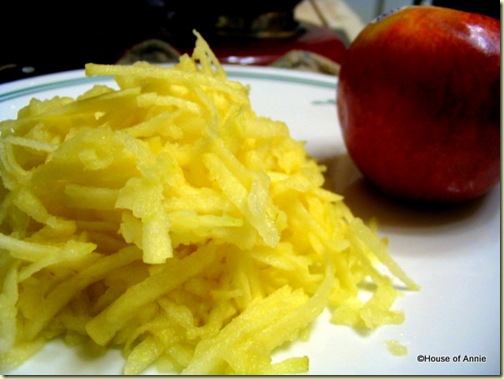 Now that apples are in season, you really need to get yourself some apples and bake this bread. You won’t regret it!

from “More With Less” by Doris Janzen Longacre
(makes 1 loaf)

Method:
1. Preheat oven to 350 F (180 C).
2. Cream together butter and sugar until light and fluffy.
3. Add eggs and vanilla and beat well, scraping down sides after each egg.
4. Combine flour, baking soda, and salt.
5. Alternating with the dry ingredients, add the sour milk or orange juice.
6. Fold in the chopped apples and nuts (and cranberries, if using).
7. Bake in greased 9×5” loaf pan for 55 minutes or until loaf tests done. 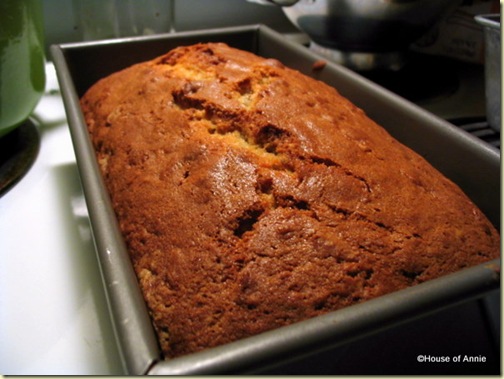 Let cool, remove to a plate, slice, and…

This post was entered in the 2009 edition of World Bread Day.