A couple of the books that the kids like me to read to them at bedtime involve apple picking: Up, Up, Up! It’s Apple-picking Time by Jody Fickes, and A Day at the Apple Orchard by Megan Faulkner. It sparked their imaginations. So for a whole year now, Daniel has been bugging me to take him apple picking. Today, we visited the Gizdich Ranch in Watsonville for their annual Apple Butter Festival. 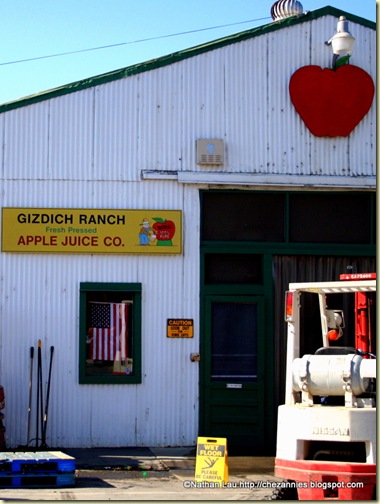 I remember several years ago when I brought Annie to Gizdich Ranch in Watsonville to this Apple Butter Festival. I think Gizdich Ranch is the closest apple farm to San Jose / Santa Clara County that allows U-Pick apples. There are a lot of places nearby where you can pick pumpkins, cherries, peaches or strawberries, but not apples. Other than Gizdich Ranch in Santa Cruz County, you’d have to drive all the way over to Brentwood in Contra Costa County or Petaluma in Marin county to find other pick-your-own apple orchards. (If you know of any U-pick apple farms closer to Santa Clara County, please leave a comment!)

The Gizdich Ranch Apple Butter Festival is held annually on the 3rd Saturday in October. The Apple Butter is made by members of the Old German Brethren Baptist Church of Modesto, who start at dawn, cooking down the apples in a 26-gallon copper kettle until the apples are reduced to a bronze-colored, powerfully perfumed, deeply flavored apple sauce. 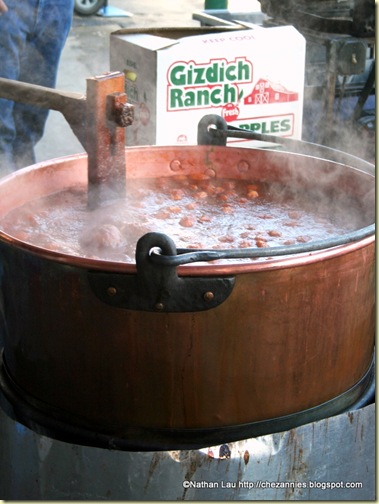 This apple butter has to be constantly stirred as the pot bubbles away like a cauldron of apple-flavored lava. It is a highly labor-intensive process. But no machine could do this justice. As the label on the canned jars of apple butter say, the only ingredients are Apples, Cider, Spices, and Love! 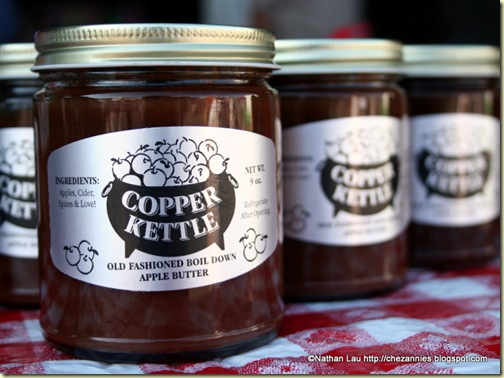 In addition to making apple butter, the folks there operate an old-time mechanical apple peeler which will core and peel an apple in about 10 seconds. It’s really, really cool.

A Hayride through the Apple Orchard

We bought tickets ($2 per person) to go on a tractor-pulled hayride through the Gizdich Ranch’s apple orchards. Our driver was none other than the son of the original owner (Gizdich Ranch is a family-owned farm – a rarity nowadays). The farm has grown over the decades from 10 acres to over 160. They’ve diversified their crops from just doing apples to also raspberries, strawberries, and ollalieberries. But their main crop remains apples. 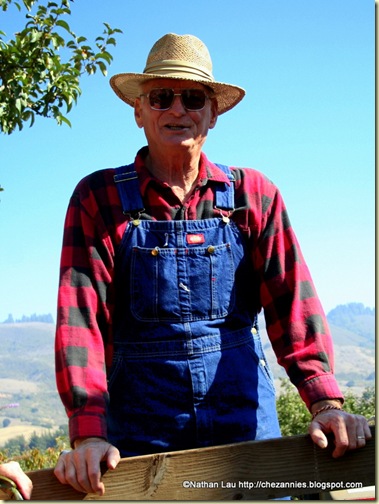 Hayrides are always a lot of fun. You have the warm sun on your face and the cool, Fall air blowing through your hair. The smell of hay and dirt intermingles with apple orchard perfume. It makes you want to close your eyes, lift your nose to the sky, and bask in the aroma. But be careful, because you could get whacked in the head by low-hanging apple tree branches!

Apples on the Tree at Gizdich Ranch 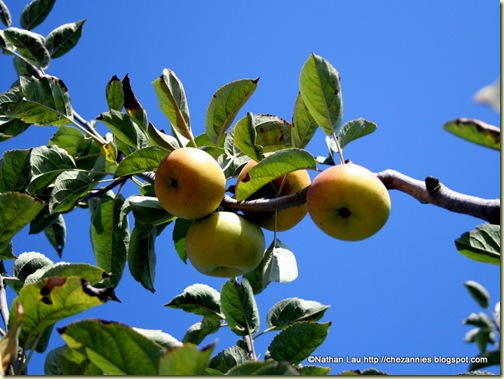 No Apple Picking, But Apple Pie

Truth be told, apple picking season is over by the time the Apple Butter Festival comes around. The last day for apple picking at Gizdich Ranch was on October 5 this year. So we didn’t actually get to go out into the orchard to pick our own apples. I had to break the sad news to Daniel. He understood, but said to me:

"Dad, next time we have to come earlier."

Sure, son. Next year.

After the hay ride, we went over to the pie shop for some fresh-baked apple pie. Gizdich Ranch is well-known for their pies. Besides apple, they also offer other assorted flavors like rhubarb, apple-raspberry, and even pumpkin pie. 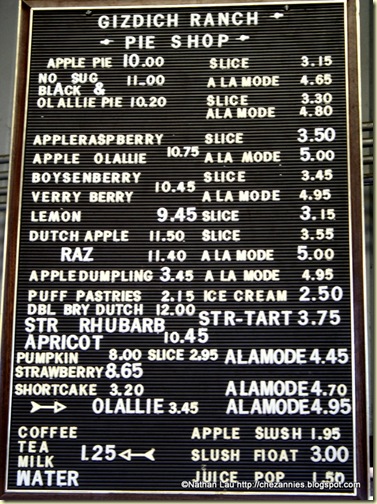 Gizdich Ranch’s apple pie is no ordinary pie. It is piled high with apples – at least twice as high as the pan itself. Nice crust, not too sweet or saucy on the inside. A solid pie. 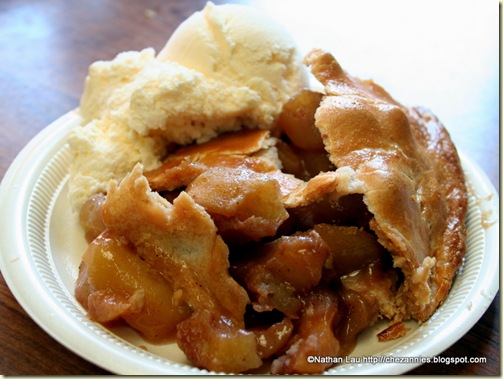 I got the Apple-Ollalieerry pie, which was slightly more tart than the straight apple. Another decent pie, but it frankly didn’t wow me. 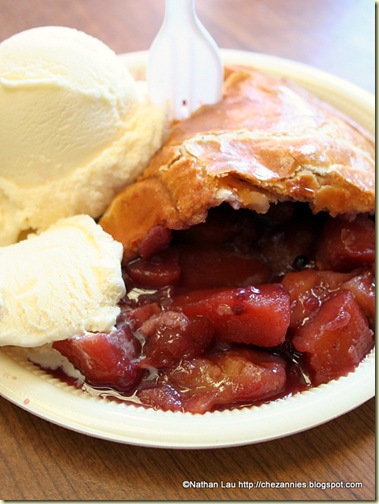 You wanna know what the best pie at Gizdich Ranch is? It’s the pumpkin pie. Seriously! I don’t think I’ve had one better. Not too sweet, not too spicy, but just right. Perfect consistency and texture. We considered bringing a whole pie home ($8 for a whole pie this good is not bad!) but eventually decided not to. 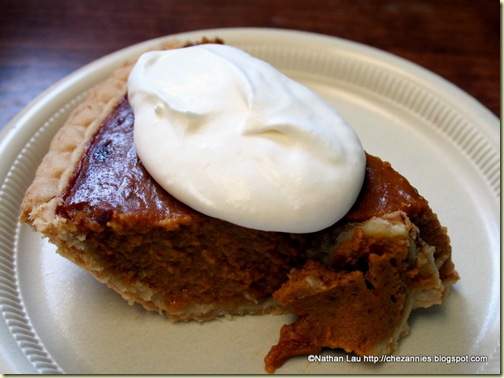 How About Them Apples?

As we walked back to our car, Daniel spied some low-hanging apples that had been left on the trees. He ran over to pick one, and it came off in his hand. He found another one and excitedly plucked that one as well. Esther spotted a fruit on her own, but Daniel got to it before she did. 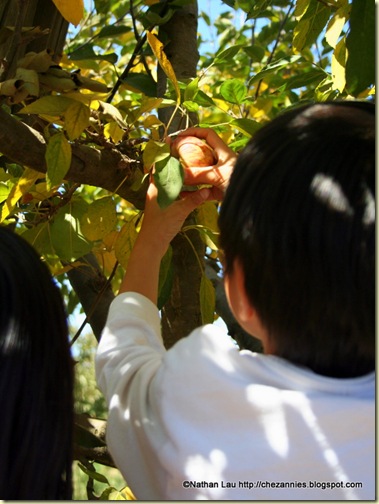 So on the last tree before we got to the parking lot, I spotted an apple and told Esther to go get it. 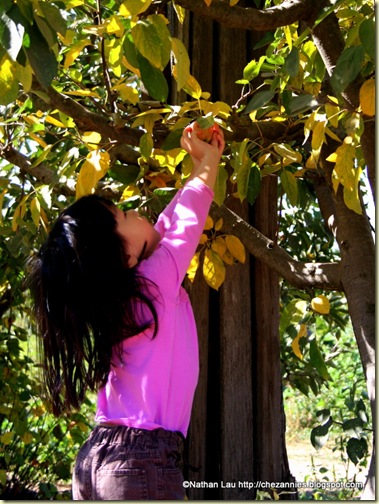 So, we ended up picking some apples from Gizdich Ranch after all! Sweet!