Remember a few weeks back, when I made some baked red bean buns. After I wrote that post, I started flipping through my Alex Goh “World of Bread” book again just to see if there was something else there that I could bake. And of course, there were several that I wanted to try. 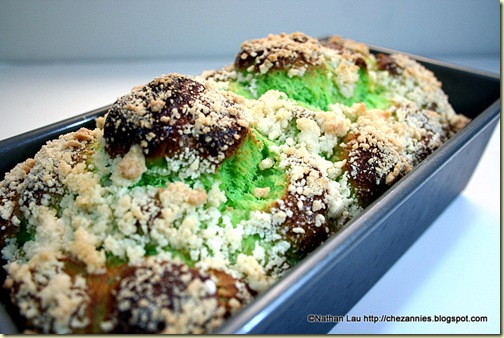 This one really caught my eye because when my mom came to visit, she brought with her several jars of fresh home-made kaya. If you don’t know what kaya is, it’s a spread made of coconut, eggs and sugar. It’s Malaysia’s answer to jam.

The traditional way of making kaya takes a lot of time. It’s cooked in a double boiler or steamer over low heat and has to be stirred constantly until the consistency thickens up. Maybe one day, I will attempt to do this (like when my kids are all grown up and I am not running around trying to get my life in order–yeah, that time–when is that? Probably never!) 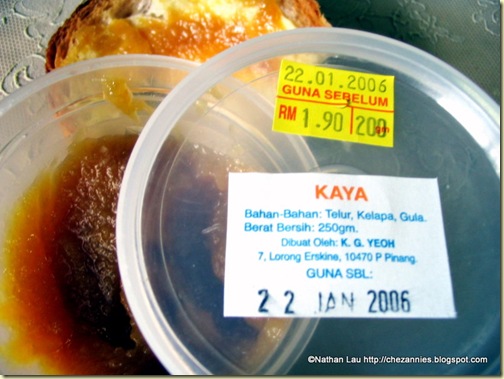 (Yes, I know the date says 2006. That picture was taken the last time we were in Penang. That kaya was seriously good!)

Now, my mom brought us so many jars and even after giving away a few, we still were left with plenty. Fresh kaya just doesn’t last that long so I’ve been wondering what to do with all these leftovers before they go bad. So this Pandan Kaya Bread recipe really caught my eye because I thought I could use up the leftovers and make a yummy bread in the process.

Unfortunately, when I read the recipe carefully, it doesn’t call for any kaya at all. Huh! Go figure…with a recipe titled “Pandan Kaya Bread”, I’d expect one of the ingredients to be kaya, wouldn’t you? Instead, it contains all the elements of kaya–coconut, sugar, eggs. So ok, I’m left with a dilemma: I want to make this bread now because I’m committed and eager after looking at the yummy picture BUT I also want to use up my kaya.

So I decide to wing it. I figured… I have kaya so I’m just going to substitute the parts that say coconut, still add one egg (which is actually more than the recipe by weight calls for) and see what happens.

I ended up making this Pandan Kaya Bread recipe TWICE!! The first time, the amount of kaya put in was barely 2 teaspoons after weighing out the substitution. And even though I could taste the kaya, it was just barely there (and I had to add more water to make the dough come to the right consistency).

The second time around I decided to layer in kaya in between the bread balls to give it even more flavor and also added about another teaspoon of it into the dough itself. This bread was definitely better and very tasty.

The Crumble is Key

Now, I realize that not all of you will have leftover kaya handy so I am going to give you the original recipe, without kaya. I’m sure it will taste really good if you just follow it as is.

But if any of you out there are looking to use up your kaya, just take out the coconut and replace that with equal weight kaya and then add another teaspoon. It didn’t harm my bread and the texture was soft and fluffy. And don’t forget to just slather on more kaya in between the bread balls when you are putting the bread together. It’ll bake into the bread and form layers of kaya goodness. So delish!

Oh, one more thing–the crumble is key. The bread itself is just a little sweet but the crumble gives it that extra yumminess that makes you wish the bread had more surface area on top to spread more of that crumble on.

Also, after forming the bread (little balls piled on each other like monkey bread), it didn’t really rise very much in the second proofing. But once it hit the oven, it bloated up like Jabba the Hut and filled out my whole bread pan so don’t worry if it looks really small when you put it into the oven.

from “The World of Bread” by Alex Goh

(B)
30g egg (it’s actually less than one egg, but I didn’t bother, just used a whole egg)
60ml Coconut Milk (read my substitution for kaya)
1/2 Tbsp Pandan Juice (I don’t have fresh pandan here so I just used my pandan paste–about 1 tsp of it)
Few drops of green coloring (which I omitted as my pandan paste already contains green coloring)
105ml Water

(D)
130g Raisins (I did not add this in–I actually forgot and the second time around, I didn’t use it since I already had layers of kaya and wanted that to be the dominant flavor)

Method
1. Mix (A) till well blended (I just used a spoon and stirred it all up)
2. Add (B), mix to form a dough.
3. Add (C), mix till it forms a smooth dough. I used my Kitchen Aid with the dough hook and mixed it on 4 speed for about 10 minutes with breaks in between when the motor got hot. It’s ready when you have the window pane effect.
4. Add (D) if using the raisins, and mix till well blended (I’d probably do this by hand if I did add raisins). Put it into a well-oiled bowl and flip around to oil the dough. Cover with plastic wrap and proof (prove?) for 50-60 minutes.
5. Mix butter and sugar of the crumble ingredients till well combined, then add flour and mix to form a crumble. Set aside or keep refrigerated.
6. Divide the dough into 15g pieces and mould into balls (ok, this was anal and the first time, I actually measured each ball out but the second time around I just guessed and cut them into small balls. It doesn’t matter people…just make small-ish balls–about an inch to an inch and a half diameter). Plop half these balls into a greased loaf pan (20cm X 10cm), then put the remaining dough balls on top of them. Makes 2 loaves (or one if your bread pan is huge like mine). 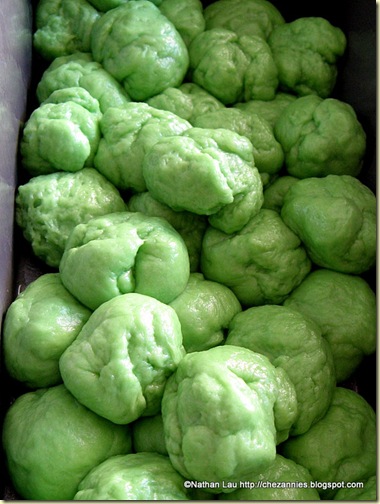 This article was entered in the YeastSpotting roundup, hosted by Susan of Wild Yeast Blog.