This is the story of a food experiment gone awry.

Chicken Propped up on a Guinness Beer Can 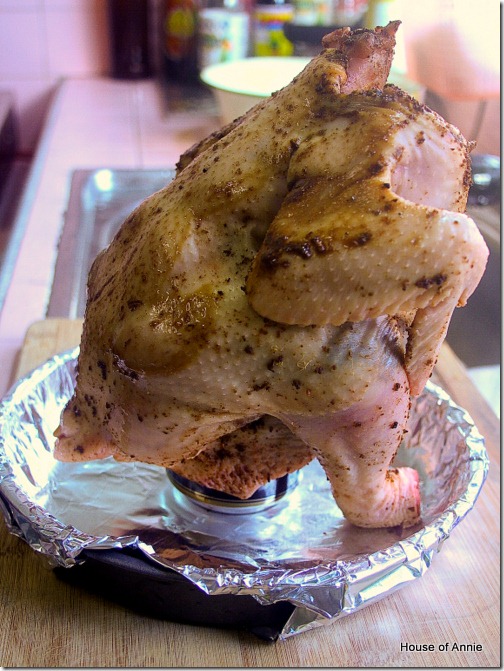 It all started when I read an article in the paper about Arthur’s Day, a day to commemorate the signing of the lease on Arthur Guinness’s brewery, over 250 years ago. You know, the maker of the popular Guinness Stout beer.  The company is holding a worldwide music festival on September 22 to celebrate.

That article sparked an idea in my  head to cook something with Guinness beer in time with Arthur’s Day. But I wasn’t interested in making an Irish Stew. I wanted to revisit a cooking technique that I hadn’t done in a long time, since before we moved from San Jose to Kuching: Beer Can Chicken. In the past, I’ve gotten tasty results using Heineken beer, so I figured to try making it again, only this time using Guinness Stout instead.

That was the start of the troubles…

Trouble with a capital “T”, that rhymes with “B”, that stands for “beer”

The first trouble was just finding a can of Guinness.  It’s not sold in every store here, so we had to go to a store which had a bigger alcohol selection. In the States, Guinness is sold in very tall cans or bottles, neither of which can be used inside a small chicken. But fortunately, I found a 325 ml can (about the size of a regular 12 oz can) in a stack around a hidden corner.

One other trouble I had was finding a good spice rub for the chicken.  We had brought a lot of spices over when we first moved here over 2 years ago. But since we’ve been cooking mostly local-style dishes, we haven’t really used those spices. So a lot of them, especially the spice mixtures like “Mural of Flavor” from Penzey’s, have gone stale.

I managed to find a Cajun spice mixture that didn’t taste too flat, so I mixed a little bit of salt with that and rubbed the fresh chicken both under and over the skin. I then put the rubbed chicken in the fridge for a few hours. 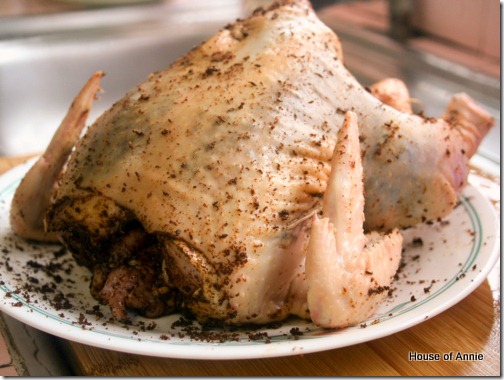 Around the time I wanted to start cooking, I popped open the can of Guinness and poured about half out into a saucepan and set the can in the middle of a foiled pie plate. Then I carefully lowered the chicken’s butt over the can until it was almost all the way on. I maneuvered the legs to help prop the chicken up. It wasn’t very stable, but it was the best I could do without a specialized beer can holder.

Chicken Propped Up On a Guinness Beer Can 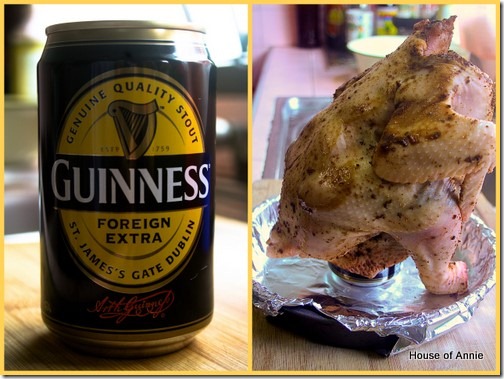 Meanwhile, I had started up a half-chimney-full of charcoal. When the coals were all lit, I arranged them on two sides of the charcoal bowl of my Weber Smokey Mountain.  Hm, doesn’t look like a lot of coals, does it?

Guinness Beer Can Chicken on the WSM 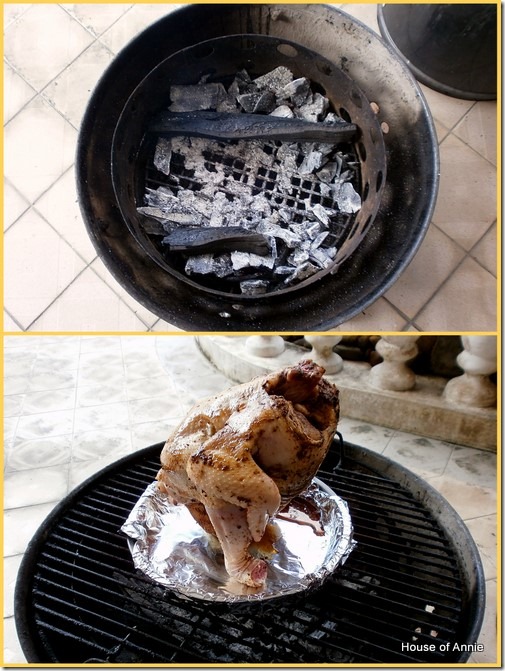 I placed the top grate of the WSM right over the coals (same as how I seared my Ribeye steaks or Tri-Tip roasts). I placed the pan with the chicken directly in the middle of the grate (the chicken tipped over at one point and I almost lost the entire dish!) and covered the assembly with the top dome. The temperature at the dome shot up to 375*F so I left it to cook.

With the remaining Guinness beer in the saucepan over medium heat, I made a dipping sauce. It was one of those “add in what I have on hand and see how it turns out” kind of deals. I used spicy mustard, tomato ketchup, Worchestershire sauce, honey, apple cider vinegar, and pepper. When I tasted it, it was too sweet.  But I didn’t feel like adding in soy sauce or fish sauce (because they weren’t particularly Irish), or even plain salt. What else do I have to make it salty?

I rummaged among the condiments on the fridge door. There, I found it:

We had some leftover from our Marmite Chicken dish last year, and it’s been sitting in the fridge, unused, ever since. It’s from Britain, which is pretty close to Ireland (well, closer than Malaysia or China, culinary-wise). And guess what: it’s made from beer yeast.

I added about a teaspoon to the Guinness stout solution and whisked it in. Then I figured I’d better not screw around with the flavors much more. So I set the sauce aside.

I also cooked up a batch of colcannon to serve as the starch for the meal.

Is it done yet?

About an hour into the cook, I went to check on the chicken. The dome temperature was now at 275*F.

Remember that I had only used a half-chimney full of coals to cook with. Those coals may have started out hot enough, but as they burned away, the temperature dropped. I had expected a 90 minute cook, but I was afraid this chicken wasn’t going to be done by then.

And Annie and the kids were getting hungry.

I let the chicken cook the whole 90 minutes, then brought it inside to quickly carve and plate it up for dinner. The trickiest part was getting that bird off the beer can, as it seemed to be welded on with chicken fat.  But I managed to twist and wiggle it off without seriously injuring myself or the bird. Then started to section it.

As expected, the dark meat parts were still not fully cooked, as the juices were not running clear near the bone. But the breast meat was cooked, and dripping with juices.

I got the chicken on the table, and served it up.

Guinness Beer Can Chicken with Colcannon and Guinness Dipping Sauce 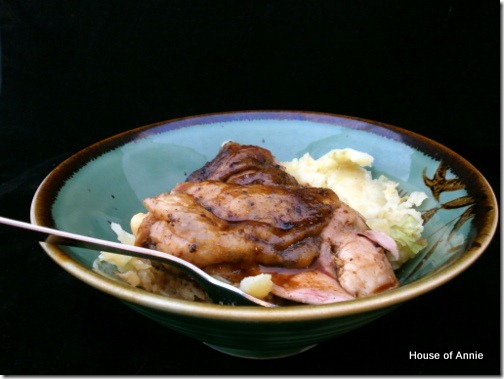 Well, the kids gave it a “thumbs up” and Annie was appreciative that I had prepared the meal. But I wasn’t entirely happy with the final product.  There were a number of things that I noticed:

Would I make beer can chicken again? Yes I would. When done right, it makes for a very moist chicken. But I would of course make some adjustments for next time:

How about you? Have you done beer can chicken before? What tips can you give? Leave a comment below!

9 thoughts on “Guinness Beer Can Chicken”