Why go out for steak?

Annie bought some USDA Choice, thick-cut, bone-in ribeye steaks from Costco for $4.99 / lb (sometimes they have Prime cuts for $8.99). About an hour before cooking, I brought the steaks out of the fridge and seasoned them well with sea salt, fresh cracked black pepper, and granulated garlic. 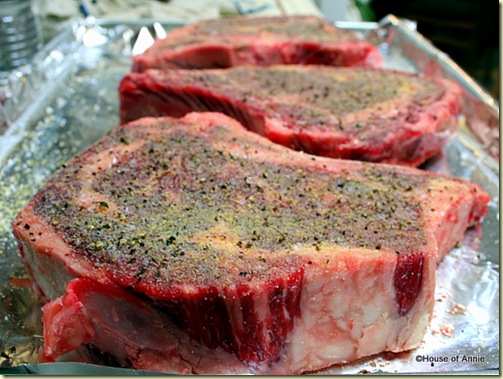 Grilling on the WSM

I have a confession: I own and use a gas grill (I know — the horrors! :-P). I like it because it’s a four-burner model that has a lot of cooking area. So when we have big parties, I can grill up a lot of meat at one time, such as our Malaysian Chicken Wings or our Killer Kalbi.

My Weber Smokey Mountain cooker is primarily used as a smoker to produce fantastic barbecue such as ribs, pulled pork, chicken, and turkey. But the WSM can also be used as a grill when I only need to cook small amounts, such as a tri-tip roast, or a few steaks. (I really do want to get a Weber kettle, though!) The trick to grilling on a WSM is to sit the top grate of the WSM right on top of the charcoal ring.

Get a Good Sear

To grill a good steak, you need to get a good sear on it. I like to have a nice crust on the outside of my steak, while still keeping it a juicy medium rare on the inside. At the Grill on the Alley Restaurant, the chef sears the steaks under a 1300*F broiler. Now, on my gas grill, I can get temperatures up to about 700*F if I crank all four burners up high. That’s not hot enough.

I think this qualifies as a 1-Mississippi or better fire. What do you think? 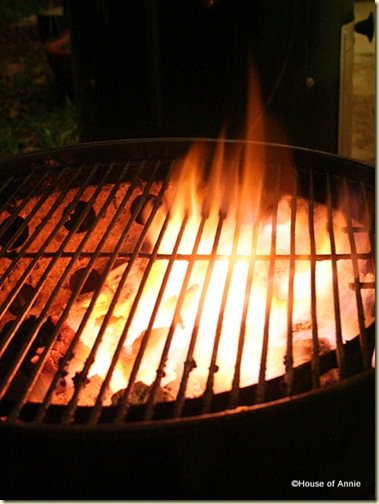 Now, toss the steaks on the grill and listen to the sizzle. Aaaah, now THAT’s what I’m talkin’ about!

Grilling Ribeye Steaks on the WSM 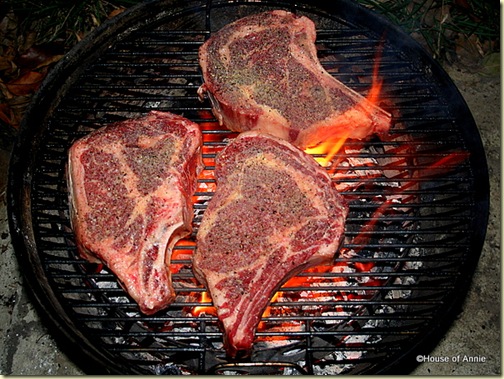 After just two minutes, flip the steaks over, then sear for 2 more minutes. The steak fat will have started rendering, so watch out for flareups or you’ll singe your knuckle hairs.  Long tongs are a must for this job (never use forks!)

Grilling Ribeye Steaks on the WSM 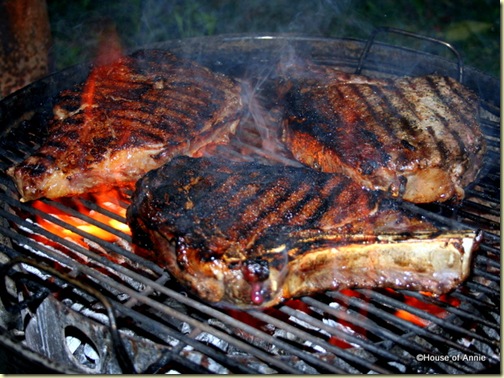 Of course, the steaks aren’t done after just four minutes. Unless you like your meat completely blue and cold inside, they still need some more time on the heat. Just not that kind of intense direct flame from the searing.

The result is, these steaks are now cooking about 2 feet directly over the coals. They are getting radiant and convective heat but are not close enough to the flame to be singed. And, of course, they are being bathed in smoke. Try that with a conventional gas grill!

After I put the WSM’s dome on top of the body, the temperature in the dome shot up to about 500*F. I’d say the steaks were roasting on the bottom grate at about 475*F. I roasted them for 5 minutes, then flipped and roasted 5 more minutes. After that I removed them to a platter, took them inside the house, and tented the platter with foil.

They rested for about 15 minutes. Finally, I sliced and plated the steaks up. Here they are served with some sauteed Bloomsdale spinach and oven-roasted root vegetables from Heirloom Organics farm. 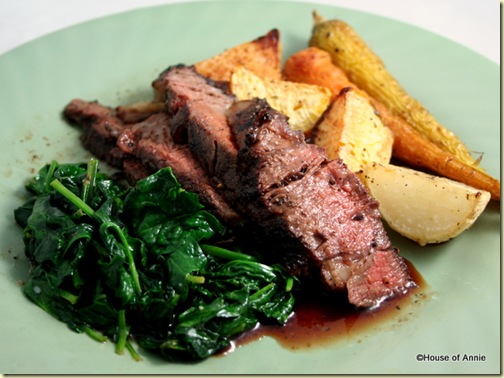 These steaks came out a perfect medium rare. They had a great crust from the charcoal-seared meat, yet retained all their juiciness. The dinner was rounded out with a wonderful 2006 Cameron Hughes Lot 86 Old Vine Zinfandel (also from Costco).

14 thoughts on “Grilled Ribeyes on the WSM”