It may not have been as expansive (or expensive) as TomatoFest, but we managed to have our own heirloom tomato tasting, featuring tomatoes grown right in our backyard.  Our guests were Cooking For Engineers‘ creator Michael Chu, and his wife Tina.  What did they think of our tomatoes? 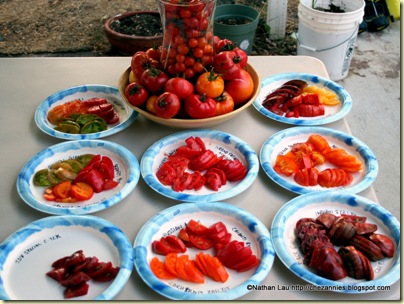 Annie and I met Michael at the FoodBuzz Featured Publisher’s dinner at Gochi Japanese Fusion Tapas back in June.  When I first saw his name, I totally geeked out.  “You’re Cooking for Engineers! I can’t believe it!”  (For those of you who don’t know, Cooking for Engineers is a food blog that started in 2004, ages ago in Internet time.  It features well researched recipes and reviews, presented in a way that appeals to analytical minds which makes him very popular with the engineer crowd.)

Who’s coming to our house?

Michael is a font of knowledge about food blogging and eating well.  We’re just blogging babies compared to him.  But he’s a humble guy, very engaging, and eager to share.  Annie talked his ear off at dinner about her homegrown tomatoes.  By the end of the night, she had invited him to our house for a tomato tasting.

“Wait, Cooking for Engineers is coming to our house, to eat our tomatoes?”  I hoped we would be able to impress him.

Last month, Michael pinged me to see when we could get together.  I said that our tomatoes weren’t all coming in yet, but later in September they would.  Last week, our backyard tomato harvest peaked.  We arranged for Michael and his wife to come over on Friday.

All in all, we had over 20 different varieties of heirloom tomatoes to share:

Before we started, Annie gave Michael and his wife a rundown of what tomatoes to start with (the lighter colored ones, followed by the reds, pinks and finally blacks).  Then she had them take a taste of the Chianti Rose.

“Oh, this is a good tomato.  Lots of flavor. Better than anything we’ve had recently.”

Annie informed them that Chianti Rose is indeed a good tasting tomato, but that particular one came from our neighbor, who had over-watered his tomatoes.  (I mentioned that in our Lazy Heirloom Tomato Gazpacho post.  Remember Tip #5: to concentrate your tomato’s flavor, you have to restrict watering.) Over-watered tomatoes, while still tasting good, lack punch.

Next, Annie told them to try out one of her tomatoes.  “Oh, my God!  You’re right! The flavors are so much more pronounced!” And on and on it went. With each successive tomato, Michael and his wife were wowed by the nuances of flavor going from sweet to tart to even smoky. 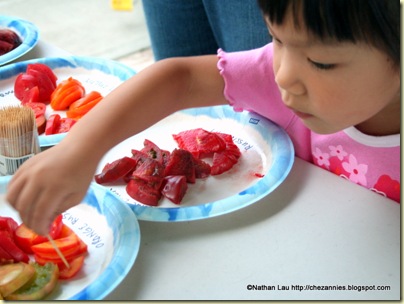 When he reached back to pick up another piece of Chianti Rose, his wife slapped his hand. “What are you doing? That’s the tasteless one!”  “Oh yeah, you’re right.” He popped it in his mouth anyway. “Oh, it’s so bland now, compared to all the others.  It’s like a palate cleanser.”

They tried keeping tasting notes but gave up early on. They tried choosing favorites, but since each tomato tastes so different from the others, there was no way to choose.  “Taste is subjective,” says Annie. “Everyone has a different opinion about which tomato is best.”

(As for me, I liked Green Giant, Orange Russian 117, Indian Stripe, and Virginia Sweets.  But don’t ask me to choose a single favorite!)

Of course, we wouldn’t have invited Michael and his wife over for just tomatoes.  We served them a dinner of roasted potatoes, Annie’s grilled kapakahi-marinated chicken (that’s for another post), and a chopped Greek salad using some of our Sungold, Red Pear and Green Grape cherry tomatoes. 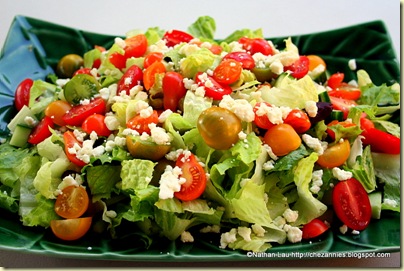 The Chopped Greek Salad recipe came from the same Fine Cooking magazine issue as the Chopped Mexican Salad.  We didn’t have garlic croutons or arugula, so we made do with Romaine.  The dressing was spectacular and worthy of a do-over.

(I would have done a gapzacho but it was too late for that.  We sent Michael and his wife home with the remains of the tomato tasting plus a few select tomatoes, to make his own gazpacho using our Lazy Heirloom Tomato Gazpacho recipe.)

Later that evening, Michael sent me an email:

Thanks for having me and my wife over. You’ve really opened my eyes about how GOOD tomatoes can be. Now I don’t think I can eat “normal” tomatoes again.

The pleasure is ours! We had such a great time that we’re already thinking about the next time we can have them over. I think this is the best part about food blogging: getting to meet other food bloggers who share our passion for food.  Just like our dinner with the Hawaii FoodBuzz Featured Publishers, these meals shared together make the food all that much tastier.

This post was entered in the Grow Your Own #17 roundup created by Andrea of Andrea’s Recipes and hosted by Chez Us.

14 thoughts on “Heirloom Tomato Tasting at the House of Annie”