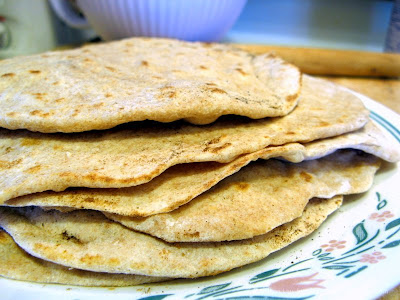 Don’t you just hate it when you want to make something, and you find that you’re missing that one ingredient that is indispensible?

We had some shawerma meat leftover from a birthday party we attended, but didn’t bring home enough of the soft lavash bread to wrap it all with. No matter, there are some flour tortillas stored in the freezer that we could use in a pinch, right?. Lemme check the freezer… DUN DUN DUNNNN!

What to do, what to do? Do I hop in the car and dash off to the store for one measly package of tortillas? If you read the title of the post, you know the answer to that question.

I CAN make my own flour tortillas!

I wasn’t about to waste precious gas going out to the store. Besides, the my last attempt at making tortillas wasn’t a smashing success and I was hoping to try again. So, I fired up the browser and surfed on over to Food Blog Search to look for tortilla recipes. It wasn’t long before I found the recipe that I wanted to try: Homesick Texan’s quest-ending flour tortilla recipe.

She used all white flour in her recipe, but I decided to go with half white and half whole wheat flour to make the tortillas. Everything else I left pretty much the same.

Mix the dry ingredients together. 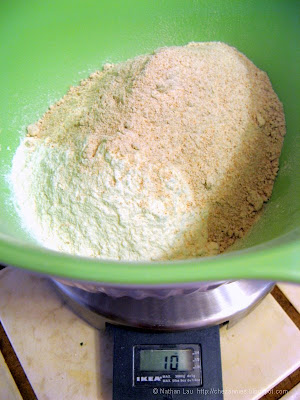 Slowly add in the wet ingredients. 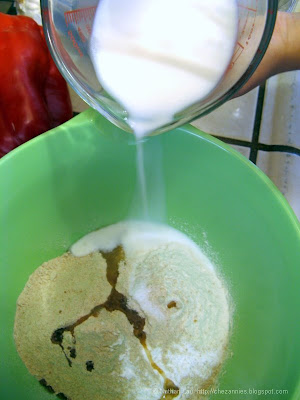 Stir until the ingredients come together in a loose, sticky ball.

Knead on a floured surface for a couple of minutes. Place the dough ball in a bowl and cover with a towel or plastic wrap for at least 20 minutes. 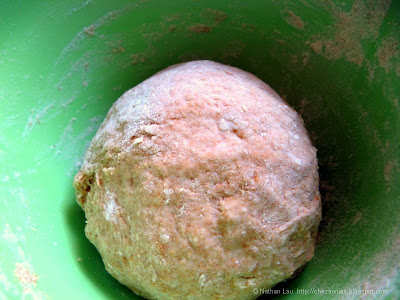 After the dough has rested, roll it out into a thick log, then cut it in half. Cut each half in half again, and then once more so that you now have 8 roughly equal portions. Roll each portion in to little balls and then set it aside to rest for at least another 10 minutes.

NOTE: If you don’t let the dough rest enough, it will pull back on you and won’t roll out very thin. The longer you rest the dough, the more pliable it will be and easier to roll out flat.

Heat a pan over medium heat.

Take a dough ball and press it out into a small patty about 4 inches across.

On a lightly floured surface, roll the dough out with a rolling pin, giving the dough a quarter turn after each pass. When the tortilla is about 8 inches across, it’s ready to be cooked.

Cook the tortilla for about 30 seconds on each side.

When I rolled out the first ball, it didn’t come out all nice and circular. So I abdicated to Annie, who is much better at pie making and wielding a rolling pin in general. Here’s a video I made, capturing the mistress in action:

So, there you have it. Home made whole wheat tortillas. It was easier than I thought, and a lot more satisfying too!

Next time, I think I’ll use flax seed oil instead of regular veggie oil. I wonder what would happen if I use all whole wheat flour instead of half and half. Do you have any thoughts, comments, and suggestions?