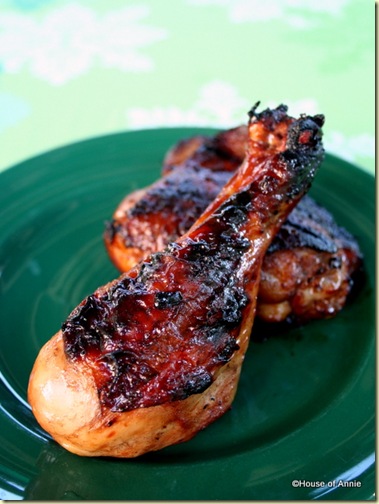 The term “huli” means “to turn” in Hawaiian. “Huli huli chicken” is a term many locals know well. It draws up memories of school or church fundraisers where thousands of marinated chickens were being grilled over large beds of kiawe (mesquite) charcoal. These huli huli chickens were some of the most delicious, succulent birds I’ve ever tasted.

The chickens would sit above the coals on big grids with four long handles, two on each side. Every so often, the grill masters would place another grid on top of the chickens. Then two guys grab the handles. One guy calls out, “huli!” and they would both turn the grids over to flip the chickens.

It was hot, sweaty, smoky, oily work. I should know. I helped cook the huli chicken one year at a Boy Scout fundraiser at my school’s carnival. I still remember the smell.

Nowadays, you don’t see so many of these kinds of fundraisers. But every weekend, somewhere in Hawaii, huli chicken is being sold. Only now the chickens are being turned on chain-driven rotisseries. That’s progress for you!

Huli chicken is not a dish you normally see at lu’aus. Nevertheless, I wanted to showcase this dish because it is simply a delicious Hawaiian dish. But I had to make an adaptation for our party.

Huli chicken usually uses chicken halves or leg quarters. I didn’t want our guests to be overwhelmed with such large pieces. So I opted to use chicken thighs and drumsticks instead.

based off of the Huli Huli Chicken recipe on About.com

*The original recipe called for sherry, but I only had cream sherry.

** The original recipe called for crushed but I grated them to infuse more flavor.

1. Trim (but do not remove) the skin of chicken pieces.

2. Mix the marinade ingredients together and marinate the chicken pieces overnight in the refrigerator.

3. One hour before grilling, remove the chicken from the refrigerator.

4. Start the coals for the grill. When the coals are all lit, spread them out evenly.

Here is where I diverge from the normal grilling method. I have a Weber Smokey Mountain smoker, which I use frequently for grilling jobs. I like it because it helps keep the meats from getting overcooked and also imparts that wonderful smoky flavor that you just can’t get on a gas grill. I also like it because you have two grates on which to cook the food.

Before putting the bottom grate in the smoker, I removed the water pan. This gives direct heat to the chicken, but keeps the meat about 2 feet over the coals instead of just inches. The chicken would have enough time to cook through without getting too burnt. It’s similar to the method I use to cook tri tip roast. 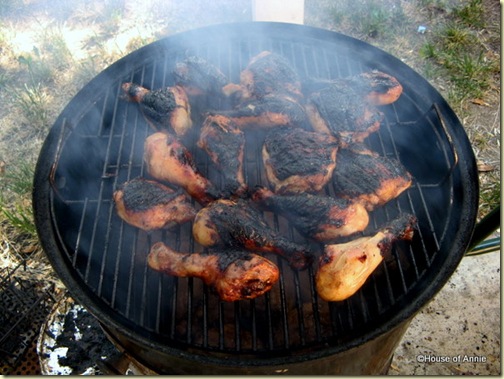 As you can see, there was some charring on the chicken skin. The rendered fat from the chicken was dripping down onto the coals. This caused some flare up issues when I had the lid off while turning the huli chicken. But oh, the smell! That heavenly aroma took me back to my day tending the huli chicken at the school carnival.

Another ten minutes, another flip, and then a final ten minutes to finish. I took one of the larger pieces out and pierced it to the bone with a paring knife. The juices ran clear, so it was time to pull! 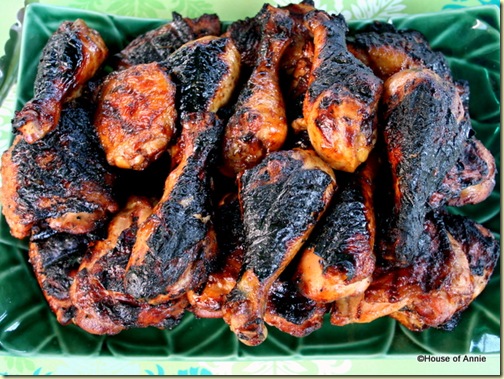 If you are doing this over a regular charcoal or gas grill, you have to be more vigilant with the flare ups. You want the huli chicken to be flame-kissed, not flambéed!

The huli chicken was very moist, and mouth-watering. This was the first dish to run out at our Ultimate Backyard Luau. Mostly because there was really only one piece of chicken per person. But I’m sure that even if I had twice as much chicken, it would still have run out.

I hope you get to try this recipe at your next grillout!