Concluding our series of homestyle Japanese dishes with a delicious, savory salad. 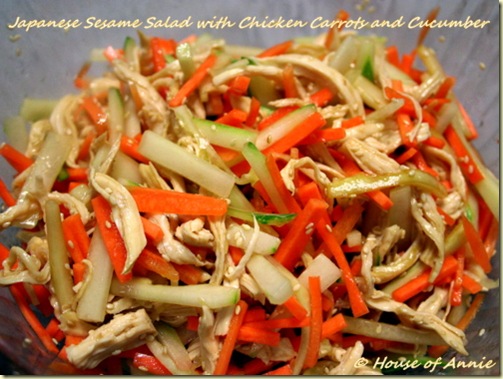 I love trying out new recipes and new dishes. I’m not one who likes to eat the same thing over and over (though for breakfast, I almost always have toast with peanut butter—go figure, I’m a study in contradictions!). I’m the same with leftovers, unless it’s something I really, really like, I don’t care too much for leftovers. Thankfully Nate will eat up all the leftovers for me. My human “garbage disposal” so to speak ^_^.

So I like to experiment with new recipes and I’m willing to serve them to friends even if it’s the first time I’m making it. This doesn’t always work out as some dishes don’t turn out great the first time (case in point is a braised duck recipe I made recently for a party—I’m NOT blogging about that until I perfect that recipe). But I’m grateful I tried this recipe because the salad turned out perfectly the first time and is simple enough to make with few ingredients. Nate and I agreed that we could have just eaten this dish on its own as a meal.

I did adapt the recipe a little. Instead of just using half a carrot and half a cucumber to one chicken, I used one carrot and cucumber each. I think this ratio is better anyway plus you then won’t have half of both to figure out what to do with. And the extra means you get a little bit more salad to eat—which Nate and I both did later that night happily!

The hardest part of this recipe is the julienning of the cucumber and carrots. Other than that, it’s basically just boiling and shredding a chicken breast, and making the dressing. Toss is some toasted sesame seeds and you’re good to go.

The one recommendation I have is that you don’t toss the dressing with the salad till you’re ready to serve it. This will ensure the cucumbers don’t give out too much water and make the salad soggy. Also, if your cucumbers are very seedy, make sure to remove the seedy part first before julienning.

Method
1. Boil the chicken breast until cooked. Cool in cold water, and then shred by hand.
2. Julienne the cucumber and carrot into long, thin ‘match-stick’ pieces. 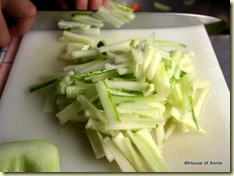 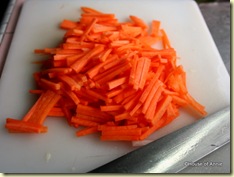 3. Mix the soy sauce, vinegar, sugar, sesame oil and sesame seeds together with the chicken and salad. 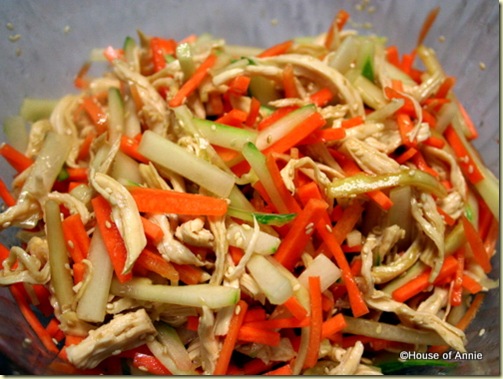 7 thoughts on “Japanese Sesame Salad with Chicken, Carrots and Cucumber”