We went on a barbecue pilgrimmage to Lockhart, south of Austin, known as the “barbecue capital of Texas“. Would we find some good ‘cue there? 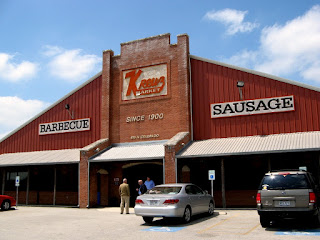 First place we stopped was Kreuz since it was on the main drag. The place was cavernous, and there were lots of people inside having lunch. 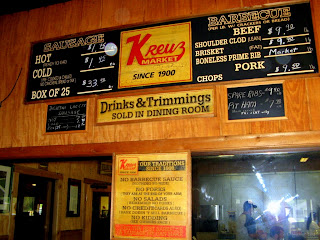 One of the signs proudly proclaimed that they served no sauce because they had nothing to hide. I like that. 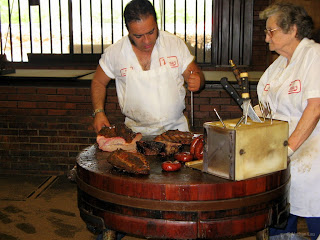 We stepped up to the counter and ordered a slab of ribs (we were planning to bring some home to our friends for dinner) and a quarter pound of brisket to try. The first slab was 4 lbs, which at $9.50 per pound would have been close to $40. Could we get a smaller slab? They pulled out a three pounder. 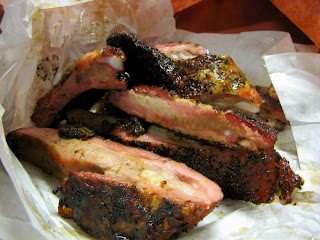 The ribs looked good. They had the appropriate smoke ring. They had come straight from the pit so we know they weren’t sitting in a steam tray somewhere. They were very juicy and fall-off-the-bone tender.

But they were overly salty. Annie and I were both shocked. This was the best in Texas? It certainly seemed like all the locals were enjoying it. But we weren’t enjoying it, and we weren’t about to bring this back to our friends. 🙁

Annie sheepishly went back to the counter to ask if they were all as salty as this. The manager said yes. So they returned our money. 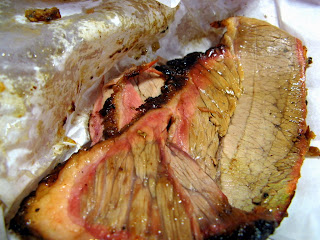 The brisket looked like it didn’t have a very big smoke ring. And you notice that they didn’t separate the point from the flat, so part of the slice was against the grain while the other part went with the grain. Not enough smoke plus cutting with the grain means a tough bite. And it was.

So much for the “barbecue capital of Texas”