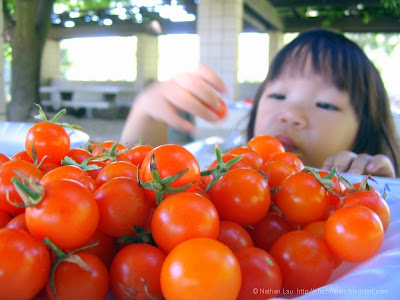 A couple weeks ago, we announced that there will be a free tomato tasting event in Northern California – NORCATT 2008 on Sunday, August 10. Brad Gates of Wild Boar Farms is hosting this event on his farm in Suisun Valley, Solano County.

Brad cultivates some of the most beautiful and tasty tomatoes you’ve ever laid eyes on, with names such as “Beauty King”, “Berkeley Tie Dye”, “Pink Boar” and “Pork Chop”. He supplies these tomatoes to such noted restaurants as Chez Panisse and Brix. And now you have a chance to taste these amazing tomatoes for free!

And that’s not all

Previous NORCATTs have just been about different tomato lovers bringing their homegrown tomatoes to the event and sharing them amongst themselves, along with a few other tomato-related dishes such as Sungold Sorbet: 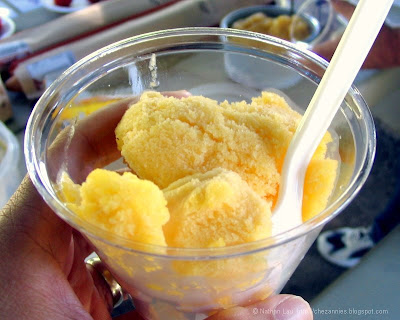 But this year, Brad has gotten together a couple of extra treats:

Terry Letson, Chef-Proprietor of Fume Bistro & Bar , will serve up some delicious samples of his restaurant’s fare utilizing Brad’s tomatoes. In addition, veteran winemaker Jim Moore of l’Uvaggio di Giacomo Wines will be there, pouring three newly released wines: a 2007 Vermentino, a 2007 Barbera Rosato, and a 2005 Barbera.

To top it all off, Brad is offering his tomatoes for U-Pick: grab a bucket, walk down the rows and rows and rows of vines, and pick your own tomatoes. Where else are you going to get the absolute freshest heirloom tomatoes for only $2 / lb? Only at NORCATT 2008!

So, if you’re in the area, and are serious about meeting with other tomato enthusiasts for a fun day of tomato tasting, email Brad at wildboarfarms@hotmail.com for directions. What to expect: sun, wind, dust, dirt and lots of tomatoes. Bring along a hat, appropriate shoes, camera and a healthy appetite for tomatoes.

Hope to see you there!

7 thoughts on “Letting the NORCATT Out of the Bag”