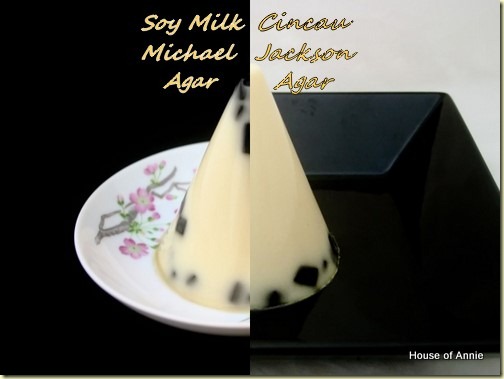 Many years ago when we had come back to Malaysia for one of our semi-annual visits, Nate and I were out for lunch one day. It was a hot day and Nate was feeling like a refreshing cold drink of soy bean milk mixed with grass jelly (cincau). I don’t recall where exactly we had gone for lunch (though I believe it was Bibi Chik in Petaling Jaya), but what I do recall with great clarity was what the wait person said when we ordered the drink:

The staff said, “Oh, you want a Michael Jackson.” Nate and I looked at each other and laughed because we got the joke—that drink was both black and white. I had never heard it called that before but it made perfect sense. Since that day, we have ordered many a “Michael Jackson”.

The combination of smooth soy bean with the herbal bitterness of grass jelly (cincau) works well together. So when it came time to make another jelly it was a no-brainer that we would decide to try to “jellify” this drink (plus we had more soy bean milk left over from the panna cotta recipe of the day before—what can I say, pake you know!)

1. In a small saucepan, heat up the soybean milk over low heat with the pandan leaves and sugar, stirring to dissolve the sugar. Simmer for 10 minutes to infuse the soy milk, then remove the pandan leaves.

2. Sprinkle in the agar-agar powder and whisk to combine. Remove from heat and stir in the evaporated milk. 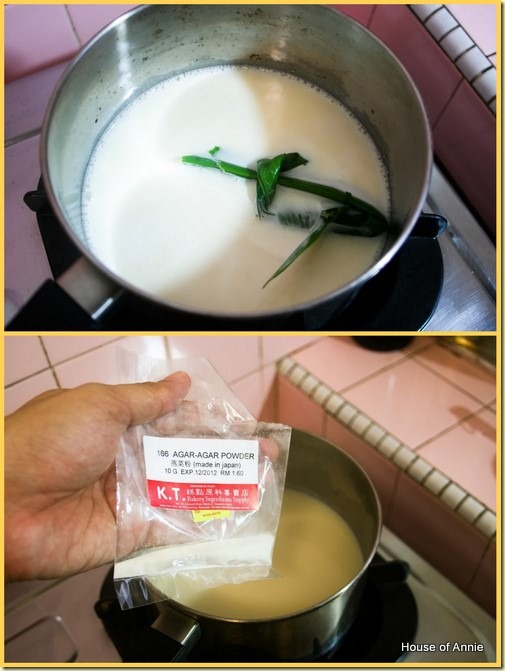 3. Cut a few slices off the grass jelly block and dice them. You should have about 1/3 cups worth.

4. Slowly pour equal amounts of the soy milk into each Royal Selangor jelly mould, filling each about halfway up the cone.

5. Drop in equal amounts of the diced cincau to the jelly moulds.

6. Top off the cones with the remaining soy milk, then refrigerate for 2 hours or overnight. 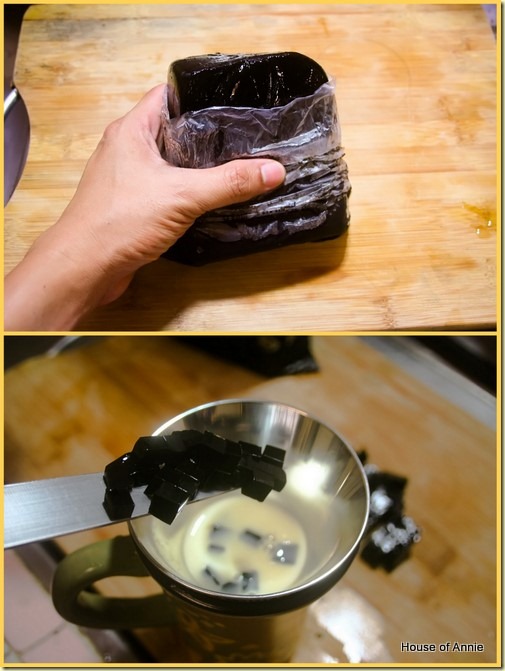 7. Gently remove the jellies from their moulds and plate them up. 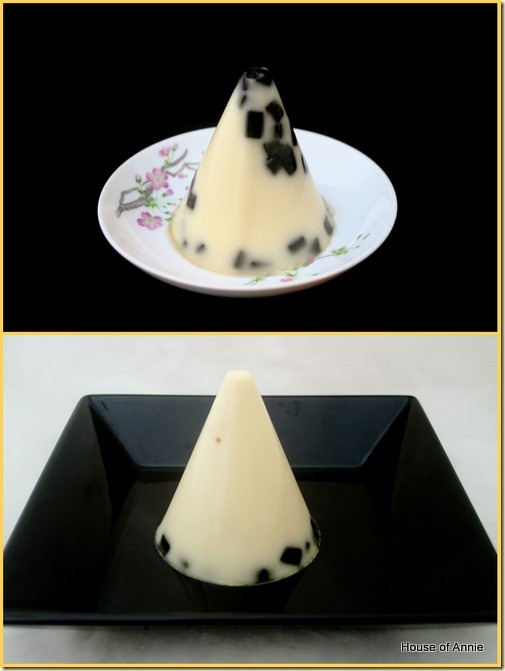 After our first attempt with the dragon fruit agar-agar, I was a little bit worried about using too much agar agar powder lest we get another really hard and brittle jelly. I decided to cut the amount of powder from 5g to 4g to see if it would soften the texture a little bit.

Amazingly it did! The texture was really nice—still firm but not hard and crunchy like the first one. Perhaps having soy milk also helped to give it a better texture. As we have been experimenting with jellies for this challenge, we’ve noticed that you do need a little bit more firming agent (be it agar agar, gelatine or konnyaku) when you are dealing with milk.

One other thing—we’ve decided that we’re going to judge if our jellies are successful by what our kids say about them. And they enjoyed this jelly very much, giving it two thumbs-up!

Michael himself may even have liked it 🙂

Play with some jelly – purchase a Royal Selangor Jelly Mould, and start making some of your own. Proceeds go to support the Breast Cancer Welfare Association of Malaysia. Malaysian customers will also get a chance to win their own Olympus Pen Lite E-PL3 camera!