I don’t know about you, but during hot summer days, I absolutely love getting those Orange Creamsicles to enjoy. The tart-sweet flavors to the orange ice combined with the sweet vanilla ice cream in the middle is one of my fun summer indulgences. And of course, now that we live in Malaysia where it is summer all the time, I try to get these sweet treats every so often to enjoy. 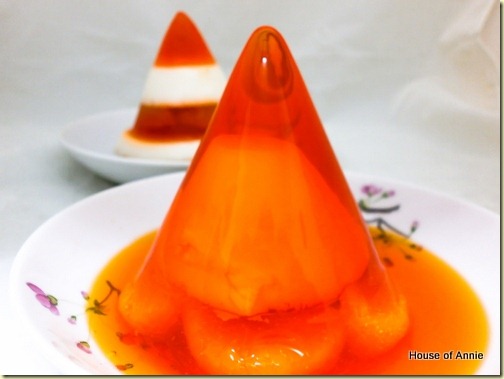 So when it came time for the Royal Selangor Jellyriffic challenge, I knew I wanted to try to turn this ice treat into a jelly. I could visualize exactly what I wanted to do but I wasn’t sure if I could actually make the concept I had in my head translate into a real jelly. So, I shared with Nate my thoughts and vision.

He told me it sounded doable and so I put in on the list. A few days ago, I decided it was time to get to it.

Playing With the Kids’ Toys

As I described it again to Nate, he asked me to draw it out so he could perfectly visualize it. What I wanted to do was to create an outer layer of orange jelly with orange slices encased in it, and then put a milk jelly layer in the middle. Finally, I would cover the top with more orange jelly thus encasing the milk layer completely with orange jelly.

Thankfully, Royal Selangor had given us two jelly moulds to work with. So what we did was, we used one mould to create the jelly and the other to be put on top so that the orange jelly layer would be filled to nearly the top while still leaving the center empty. Our kids helped us by lending us their K’nex toys to build a nesting prop for the second mould. 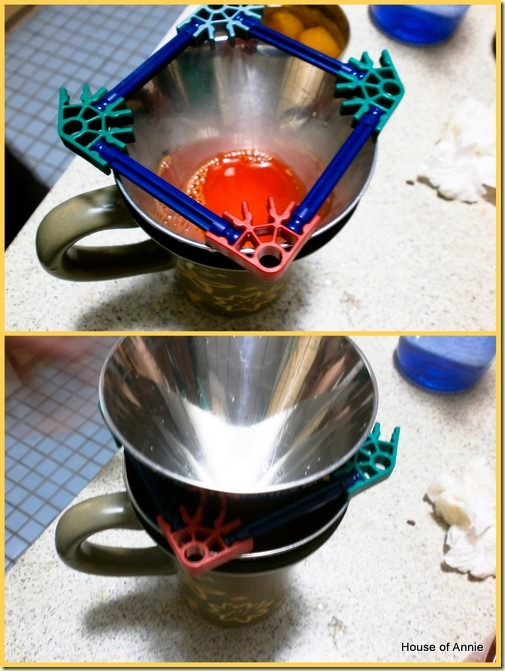 I had gotten some mandarin oranges to use with the orange jelly but realized very quickly that they were too fat to put along the walls in the middle. I still wanted to use them so I ended up placing them around the base of the mould (the top when making the jelly and then covering them with more orange jelly.

The Trick to Coaxing a Jelly

Taking out the jelly from the mould turned out to be one of the harder parts of this creation. Jellies made with gelatine take a lot more coaxing when compared with Konnyaku or Agar Agar jellies. We almost ruined this one as you can see from the first picture. First, we tried the knife trick where we ran a knife along the edge of the mould. That didn’t work so well. So next we used hot water.

Unfortunately we got careless and used boiling-hot water and the jelly started melting lickety-split, leaving Nate frantically hunting for his camera to take a shot before the whole thing disintegrated on us. If I had to do this again (and I probably will because it was super yum-o!), I’d spray the mould with non-stick spray and if that doesn’t work, to use a hairdryer (thanks Terri for the tip!), or dip into warm, not boiling water.

For the milk layer, I initially wanted to use evaporated milk (thinking that it would create a richer flavor). However, when I tasted the evaporated milk liquid, it was nasty and so I chucked it out and opted for fresh whole milk instead. Because the orange layer would be very sweet, I only added a tablespoon of condensed milk to add some sweetness to the milk layer. The combination of the two actually worked so well that I can’t wait to make another one. I might try it again with lime jello to see how that works.

1. Mix half cup water with orange jello and additional two tsp gelatine powder. Heat up the other one cup of water till boiling and add to jello mix. Stir till all traces of powder has dissolved.

2. Pour about ⅓ cup of jello into Royal Selangor mould, then place the other mould on top (use something to allow the second mould to rest a little apart from the first mould). The orange jello should rise to an inch away from the top. Set in the freezer for 5 minutes to harden.

3. In the meantime, make the milk jello. Pour ½ cup milk into a microwave safe cup and sprinkle remaining 2 tsp gelatine powder on it. Allow gelatine to bloom before stirring in the other ½ cup of milk. Put the milk into the microwave and microwave on high for 45 seconds. Take it out and stir. Continue to microwave in 30 second increments and stir till all gelatine has been dissolved. Put the milk in the fridge to chill while waiting for the orange layer to set.

4. Take the orange layer out of the freezer (making sure it has set, if not, put back in freezer again) and add a little warm water to the top mould to help remove it. Gently pry the top mould off. You should have a V-shaped cavity in your first mould.

Removing 2nd Mould and Pouring in the Milk Jelly 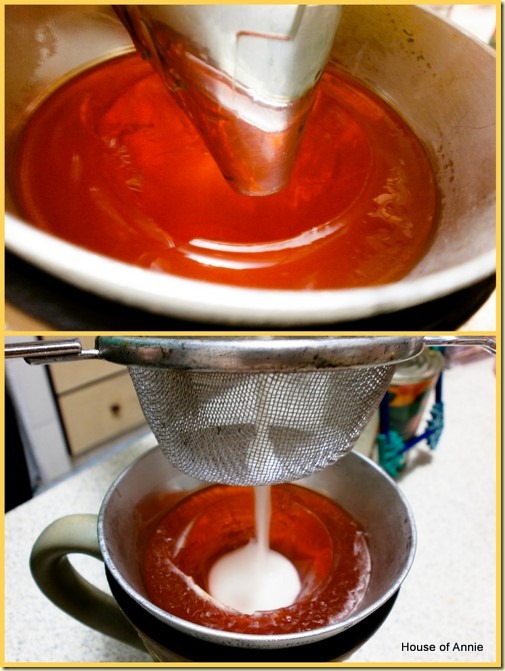 5. Wait to ensure that milk jello is cool before pouring into the cavity. If milk jello is too warm, you won’t get a solid milk layer, instead the orange jello will melt and create a peach colored center so be patient! Fill milk in the cavity ensuring that you don’t overfill (if you do, just leave it to set and scrape off milk from the sides before adding the rest of the orange jello). Put in fridge to set for about 20-30 mins (don’t put it back in the freezer as this will cause the orange layer to freeze).

6. Once milk layer has set, arrange the mandarin slices (if using) artfully around the top and fill with more orange jello to the top. Leave to set overnight. We made enough for two moulds and then some. For the second one, all we did was create layers of orange jello (with orange slices) and milk jello. This also turned out really pretty and was a lot easier to create.

For the layered look, start with orange jello, then milk, then in the second and third layers of orange jello, add some mandarin orange slices. Remember to ensure that each layer is set before adding the next.

Remember to come back tomorrow for a special story and a special jello that is especially close to my heart!