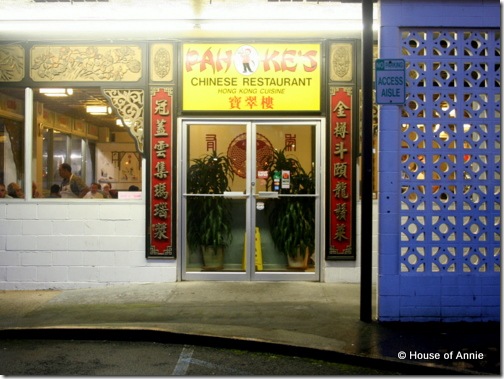 One of the things I was craving for when thinking about our trip back to Hawaii was Minute Chicken Cake Noodle. This is a dish that was originated in Hawaii, at the On On Chinese Restaurant on McCully Ave in Honolulu. Wheat noodles are cooked, pressed down into a flat cake, about a half an inch thick, and then pan-fried until the outside is crispy. Top it with some fried boneless pieces of chicken and an oyster-based sauce, and you’ve got a delightful meal.

What’s Going On, On the Windward Side

Pah Ke’s Chinese Restaurant is located in Kaneohe town, on the Windward side of the island. It’s in a little non-descript strip mall right facing Kamehameha Hwy, next door to Windward Mall. By all appearances, it is a typical neighborhood Chinese restaurant – not too fancy but with enough space for large banquets if needed. Could this restaurant really be any better than what we can find on the “Town” (Honolulu) side? 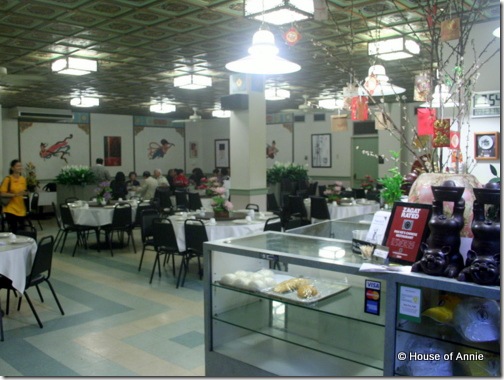 Billy was already waiting for us with the menus so we got to ordering right away. He eats here regularly, so he knows the staff and he knows what’s good. The menu has your typical Chinese restaurant dishes like Beef Broccoli, Sweet Sour Pork or Lemon Chicken. But there’s a special section there called “Chinese Hawaiian Cuisine” that will really throw you for a loop.

Billy explained that the chef-owner, Raymond Siu, used to work in some of the kitchens best known for developing “Hawaii Regional Cuisine” like Roy’s and Alan Wong’s. When he opened Pah Ke’s, he applied those concepts and values to his Chinese dishes and created his own “Chinese Hawaiian” specialties.

Soon, the dishes started arriving. The Spinach Salad with Orange Vinaigrette was definitely a nice upgrade from a typical Chinese chicken salad with iceberg lettuce, but it seemed a bit heavy-handed on the fried wonton strips, and slightly overdressed. The Minute Chicken Cake Noodle was very garlicky and the chicken was fried perfectly. The noodles were nice but I felt that the sauce was a bit too thick. 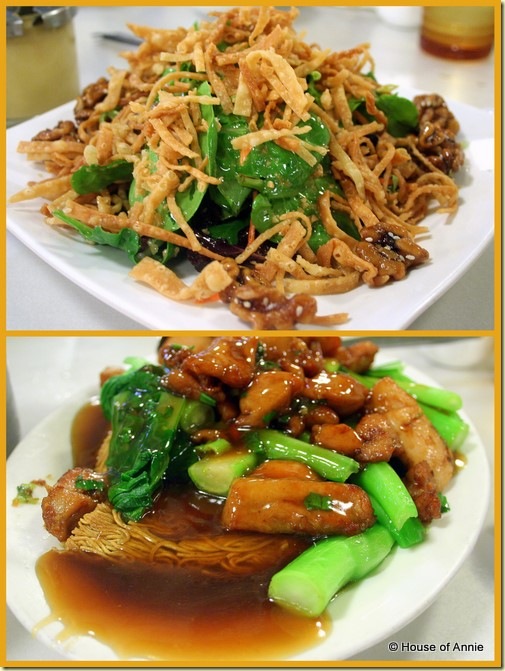 We also ordered some Kau Yuk (braised pork belly) and steamed buns – those were mouth-wateringly tender and delicious. The Scallops and Asparagus dish was good as well – the scallops were cooked just right and I appreciated the textural contrast in the crunchy fried spinach leaves. 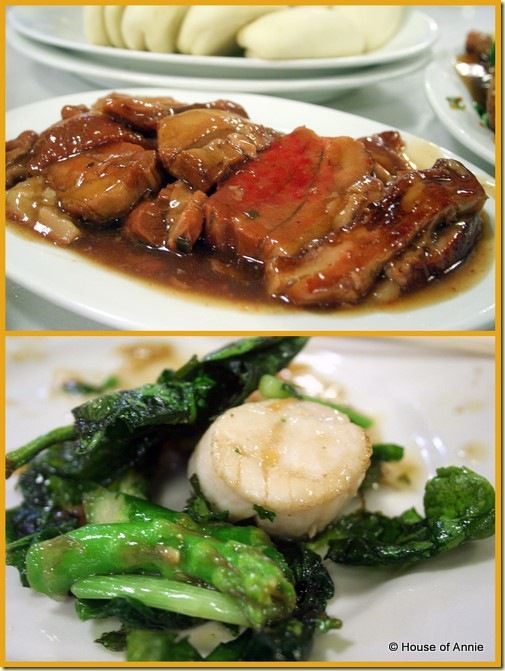 Mind you, all this was just for three adults and two kids! By the last course, we were reeling. But then Billy called the waitress to ask for the menu again. “Gotta have dessert,” he said.

Dessert?! Are you kidding me? We’re too stuffed. We don’t have room for dessert!

“Trust me,” he said assuredly. Well, okay, maybe just one dessert. I’m probably not going to finish it.

When the dessert platter arrived, we were astounded. There were actually four desserts on one plate: Red Velvet layer cake, a Banana Split with fresh fruits and Banana Ice Cream, a Soy Milk Custard with fresh fruits and Mango Sorbet, and five Chocolate Crisps. The array was mind-boggling. This is coming out of a neighborhood Chinese restaurant?! 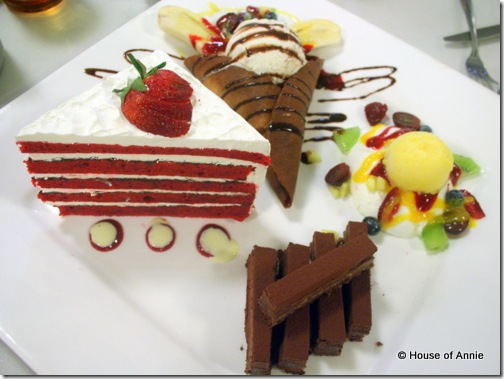 The red velvet layer cake was very unique. There was a thin layer of chocolate ganache on top of each layer, followed by a light meringue frosting instead of a typical cream cheese frosting. The cake was very good, but I did miss that cream cheese tang. The kids devoured the banana split. I really enjoyed the soy milk custard – it has the consistency of a panna cotta but there is no milk in it and the sorbet and all the fresh fruits on it were such a delight. The chocolate crisps were light and addictive.

Before we knew it, the dessert platter had been demolished! We pushed back, amazed. What is going on here? How can a neighborhood Chinese restaurant serve world-class desserts?

The Rest of the Story

Fortunately, Chef Siu happened to be walking by so we stopped him to express our astonishment at his food. Chef Siu is a really nice guy. Very personable and generous. He is also quite a talker, once you get him going. We were able to hear the whole story of how he came to his style of cooking. 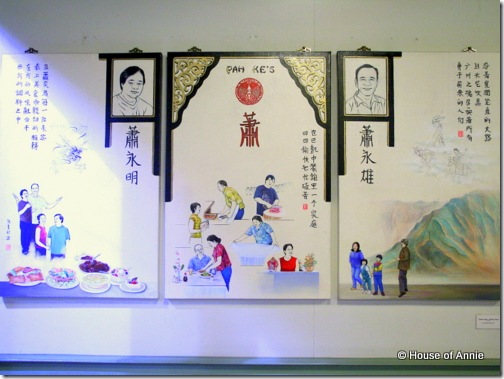 Chef Siu was born in Guangzhou, China and grew up in Hong Kong where he learned to be a shipbuilder. He had a successful career, working in different places around the world. He was residing in London when he came to Hawaii to stay with his brother who at the time had a farm in Makaha.

Farm life was too boring for him so he decided to look for something to do. What do most Chinese immigrants with no experience do? His brother told him, go work in a restaurant!

So he started working as a waiter. He was asked to help cater for a private party and ended up actually cooking a dish there and impressing the host. One thing led to another, and he found himself working at Michel’s at the Colony Surf, one of the best French restaurants on Oahu.

When the chef there was recruited to open the first Roy’s restaurant, he brought Siu along. There he was introduced to the developing Hawaii Regional Cuisine – applying fine cooking techniques to fresh local ingredients and recipes. His eyes were opened to the possibilities.

After Roy’s, Siu also worked in the kitchens of fellow HRC pioneers Alan Wong and George Mavrothalassitis. His interests then turned to pastry-making, so he applied and was accepted for a job as a pastry chef at the Halekulani Hotel. There he found his love in breads and pastries.

All of this is testament to his hard work and hunger to learn and grow. But working in someone else’s kitchen meant grueling hours, and he wanted something closer to a normal life with his wife and children. So he decided to open his own restaurant where he could set his own hours and go home at a decent time.

He wanted a restaurant with an easy-going, neighborhood feel, where he could do Chinese food and Western desserts his way. But he didn’t want to have to compete with other high class restaurants on the Honolulu side of the island. So he and his brother opened Pah Ke’s in Kaneohe. Since opening, the restaurant has garnered several “Best of Hawaii” awards and gotten rave reviews. And the rest is history!

Many thanks to Billy who introduced Pah Ke’s to us, and to Chef Siu for his hospitality, his candor, and his excellent food! 4 stars!