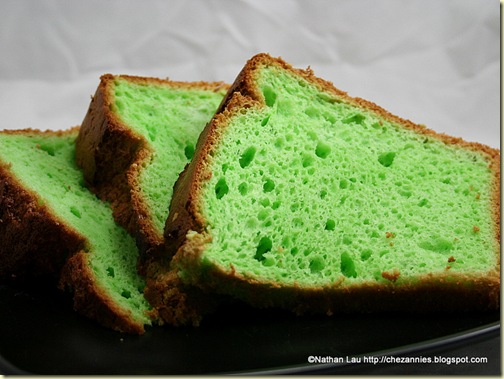 Pandan chiffon cake is one of my comfort foods from Malaysia. The fragrance of pandan, the softness of the cake, the sweetness of the coconut milk are all very much a part of Malaysia to me. There’s something wonderful about taking a bite of cake and having all these flavors and textures combine and then just as you’re savoring it, you’re left with only the memory of the light fragrant delight until the next bite, and the next.

As a student in Hawaii, I missed pandan chiffon cake so much that I asked for a recipe and then proceeded to bake it with no experience and a very vague recipe. Of course, it didn’t turn out. My failures with chiffons started with that first pandan chiffon cake.

When I was new to baking, I would look at recipes for chiffon cakes and sponge cakes and attempt them without any real understanding of what made them work. All my early attempts at both these cakes were dismal failures. They would rise really tall in the oven and then I’d get all excited. But when I opened the oven, they would fall flat!

I avoided making these cakes for a long time after that. As a matter of fact, I still have some aversion to making sponge cakes to this day (weird huh?). But after reading Beranbaum’s Cake Bible and trying out the orange chiffon cake from that book, I’ve had great success and have been more confident of baking chiffon cakes since.

The secret to chiffon cakes, as it turns out, is that they need a lot of volume. You have to make sure you beat the egg whites really well! Also, when you separate your egg yolks from the whites, be very sure that there is not even one bit of yolk in the whites. If that happens, your whites will not whip up to stiff peaks. 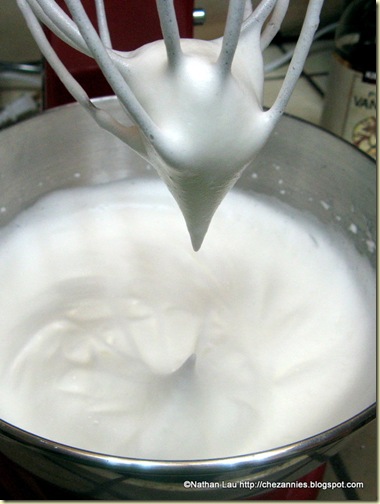 Some of the other tricks I learnt about baking chiffon cakes come from different books and magazines:

I hope that all that I’ve learnt will help you if you’re new to baking chiffon cakes.

I adapted this recipe from Baking Mum and she has told me that she has another recipe that is better but I haven’t had a chance to try that other one out so I will post on this one first. I did double her recipe as my chiffon cake pan is really large (plus it’s so good that even doubled, my family wolfed it down in no time at all).

If you have never used pandan (screwpine leaves), you have to give it a try. The leaves don’t really taste like much but the leaves impart a wonderful aroma and fragrance to whatever you cook or bake. The leaves are also used as food coloring (though the paste I use is artificially colored as pandan leaves will not turn that bright a green) in a lot of desserts in Malaysia.

Fresh pandan juice is normally the better choice for any application but being that it’s so hard to get that here, I chose to use pandan paste instead. It’s quite easy to find at most Asian grocery stores (and cheap to boot!). 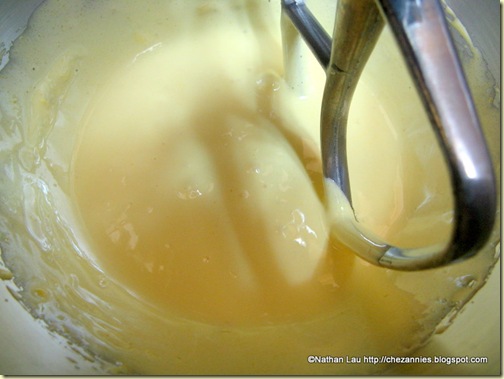 4. Add in sifted flour and baking powder, vanilla essence, coconut milk, corn oil, and pandan paste into the egg yolk mixture. Mix well.
5. In another clean dry bowl, whisk egg whites (start on slow speed until foamy then increase speed to medium). When egg whites are whisked to soft peaks, add the remaining 60g sugar, cream of tartar and a pinch of salt. Continue to whisk until stiff peaks form.
6. Fold the egg whites into the flour mixture. Start by adding 1/3 egg whites into flour mixture and using a balloon whisk, incorporate it into mixture to lighten the mixture. Mix the remaining 2/3 egg whites in taking care to fold gently to keep volume. I find that using a balloon whisk to incorporate in a “sweep and knock out and turn bowl, repeat” method works best. (Does that make sense? I should’ve taken a video…next time ok?)
7. Once incorporated, (don’t worry if there are a few streaks of white left) pour into the chiffon cake pan and bake 45-65 mins, or until an inserted cake tester comes out clean.
8. When cake is baked, invert it immediately and cool down for 2-3 hours (I normally have a bottle of wine that I use as my holding “tool” for the inverted pan). Once cooled, use a knife to cut around the sides and bottom before removing.