This healthy soup is so delicious, you’ll be begging for more! 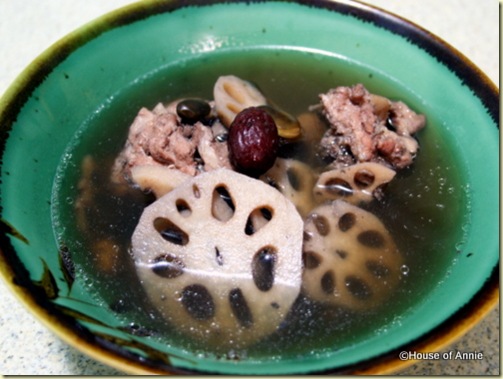 We were having dinner in a Chinese restaurant the other day. Nate wasn’t feeling very good and so he wanted some herbal chicken soup. But the waitress said they only had two soups for that day—one was a black chicken soup and the other was this lotus root and black bean soup.

I remember that the Chinese believe that chicken is not good when you are coughing. Strange eh? I also remember another friend who had recommended black beans as a cure for coughs. So we agreed and ordered it. I told her that Nate’s throat wasn’t feeling very good and she immediately pointed to the black bean soup.

When the soup came, the whole family drank it up in no time at all. It was seriously good! The pork bones and the lotus roots were tender, the black beans were creamy and the soup was just comforting in flavor besides being very delicious. Esther actually wanted some more soup at the end when we were all done. We tried to get her to do an Oliver and go to the kitchen with her bowl and ask for more but she was too shy 🙂

We didn’t want to order another big bowl just for her so I told her I would try to make the lotus root soup for her the next day. Good thing this restaurant was next to a grocery store so I picked up some black beans and lotus roots. I already had pork bones at home so I was good to go.

How’d it Get So Tender?

Oh, during the dinner, Nate and I had a discussion about how they had gotten the pork so tender and the beans so creamy. We ended up pondering double-boiled soups, pressure cooker cooking and slow cooker cooking. All of which I could not do as I didn’t have any of these items at home. Oh well…

I started the soup in the late morning as I wanted to make sure that I gave the soup plenty of time to simmer to get optimum flavor. I did my usual parboiling of the bones and tossing out water from the first boil. Then I started the bones again with new water.

Once that came to a boil, I put in my presoaked black beans and lotus roots along with some red dates. As soon as they all came to a boil, I turned the soup down to low and let it simmer for more than 4 hours.

How do I Get it So Tender?

After that time, I must say, my beans did not soften and get creamy the way the restaurant’s did. It wasn’t hard but it wasn’t creamy. I even made sure not to add any salt until the end as I had learned that beans don’t soften up when you add salt while cooking it. But somehow, the beans still had some bite to it. I couldn’t wait too much longer so I seasoned my soup and a little later served it for dinner.

Esther still drank up the soup and ate the beans but she told me, “mommy, the beans are not as good as the one we had yesterday, but I still ate it!” I guess that is not the worst criticism to get. Overall, I managed to achieve the same flavors in the soup as the restaurant but I didn’t manage to get the tenderness in the meat or the beans. If you know how I could have done this without using a pressure cooker or crockpot or double boiler, would you leave a comment and let me know?

Ingredients:
500g pork bones (usually the neck bones are good to use, or rib bones are also good)
8 cups water
10 red dates, washed and rehydrated
4-5 tubular pieces of lotus root (choose the ones that look least bruised and discolored), joints cut off and sliced 1/4 inch thick) 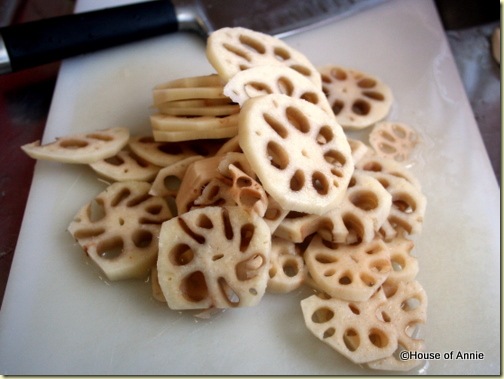 1/2 cup dried black beans or peanuts, soaked for several hours before use (at least 2-3 hours) 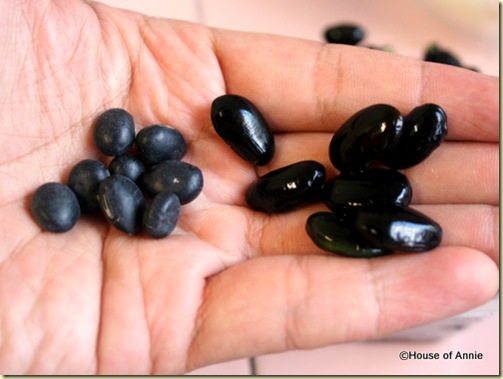 Method:
1. After parboiling pork bones and tossing out water from first boil, rinse bones and boil again in 8 cups water.
2. Once water comes to a boil, add red dates, black beans and lotus roots. Let stock come to a boil again and then set the fire to low and let simmer, covered for 4-5 hours. 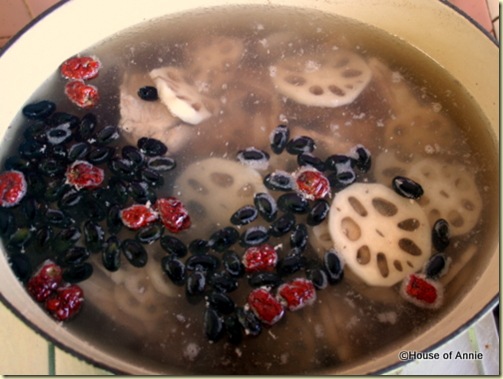 3. Once the pork bones, beans and lotus roots are tender, add seasonings—about 2 tsp salt, 1 tsp fish sauce and a pinch of chicken bouillon (or to taste). Stir and simmer to incorporate flavors. Taste and adjust seasonings accordingly.
4. Serve and enjoy!

This recipe using lotus root was
entered into the Weekend Herb Blogging recipe roundup, organized by Haalo of Cook Almost Anything and hosted this week by Lynn from Cafe Lynnylu.