Our friend Arvind (who gave us his tasty Mustard Potatoes recipe) also introduced us to quinoa several months ago. The quinoa (pronounced “KEEN-wah”) seed is a food that is becoming more popular nowadays for its nutritional value. It is high in protein and gluten-free. It is also simply delicious.

Quinoa Salad with Shrimp and Asparagus 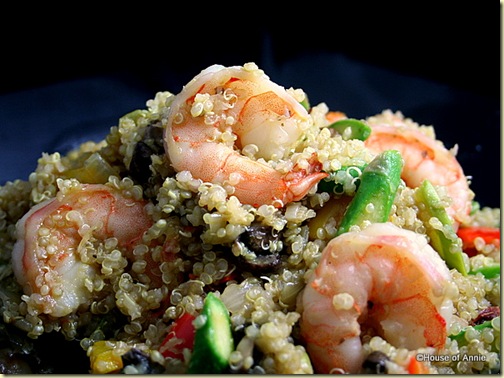 Annie had gone out for some afternoon coffee and conversation with a couple of her girlfriends, just to get away from the kids and the house and to decompress a little. She suggested I cook something for dinner using quinoa and shrimp that we had in the freezer, so a-Googling I did go and quickly found this recipe on Allrecipes.com . Now, I’m not the best cook, so any recipe has to be easy enough for me to do. This recipe fit the bill.

Actually cooking and building this quinoa salad with shrimp and asparagus is quick. It’s the prep work of slicing and dicing the veggies beforehand that can take a while if (like me) you’re not as good with a knife. But I made it through and was actually surprised at how fast the dish came together.

*The original recipe calls for a pound of shrimp, but I feel that 1/2 pound is enough.

1. Bring water or chicken broth to a boil, then add the rinsed quinoa. Cover the pot and lower the temperature. Simmer for 15 minutes, then turn off heat. Let the remaining liquid absorb into the quinoa. 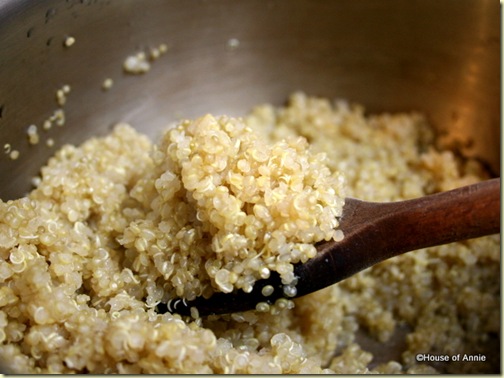 2. Heat olive oil in a large skillet. Sauté the garlic, onion and bell pepper until they soften. 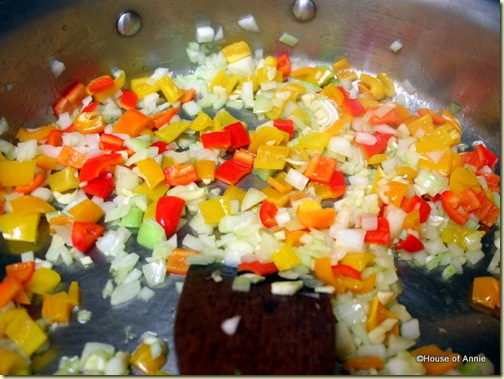 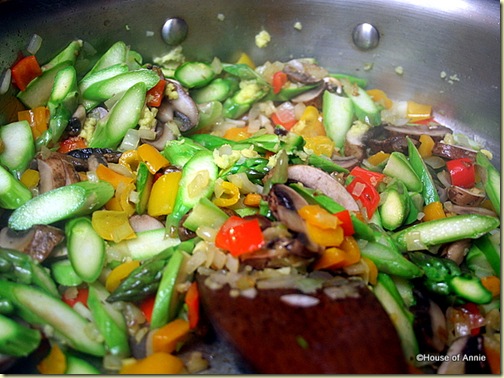 4. Add in the shrimp to the vegetables and cook until the shrimp turn opaque, about 5 minutes.

5. Mix the lemon juice into the quinoa, then toss the quinoa into the vegetables and shrimp. Adjust seasonings.

Quinoa Salad with Shrimp and Asparagus

The quinoa is not as fluffy or crumbly as couscous nor as soft or sticky as rice – it has its own unique texture. This entire quinoa salad is just bursting with flavor. All sorts of umami were present, from the mushrooms to the sun-dried tomatoes to the shrimp. The quinoa had absorbed the chicken-y savoriness of the broth while the onions and bell peppers contributed sweetness. The brightness of the lemon brought all the flavors together and intensified them.

I served this to Annie when she came home and she loved it. “Can you make it again?”

22 thoughts on “Quinoa Salad with Shrimp and Asparagus Recipe”