I really didn’t feel like cooking last Thursday. It was one of those days when I just felt lethargic, and didn’t have any mood to do much. The day had started with rain and then more rain. The whole morning was dark and gloomy and by the time the sun deemed to peek out, it was already mid-afternoon. Somehow the weather just made me feel very unproductive. Or maybe it’s that one-month mark of being here…feeling not quite like this is home, missing California and feeling somewhat homesick (which is strange because I am Malaysian after all).

So when it came time to prepare dinner, I just didn’t have any energy to do it. I called Nate at work and told him that we’d have to eat out and get some food to go. He tried to convince me that we had enough food at home to make something and maybe we could just pick up a roast chicken or something to go with it. I tentatively agreed but I still wasn’t really feeling it. I was just not wanting to cook anything at all.

Then, it struck me. In all the chaffeuring I had been doing sending Nate to and from work, I passed by this Ramadhan Bazaar at Stutong Market almost every weekday. And almost everytime we passed it on the way home, I would say to Nate, “we should stop by one day and pick up dinner from here before the Ramadhan (fasting) month is over.” And by Thursday, the fasting month was quickly coming to a close; Aidil Fitri would be celebrated on Sunday. So I called Nate back and said, “let’s go to the Ramadhan Bazaar and pick up some dinner there instead!” He thought it was a great idea and so that was where we headed after work. 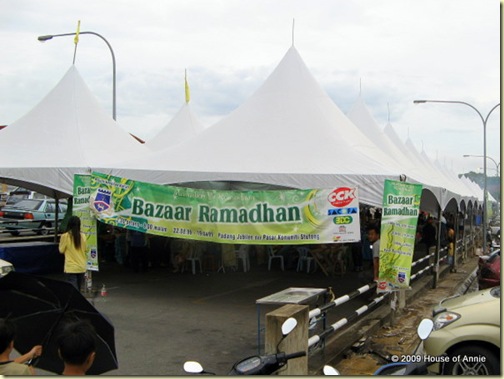 For those of you who were wondering what makes the Ramadhan month special in Malaysia, it’s the one month of the year when stalls pop up all over various neighborhoods in the evenings selling food and drinks to all the Muslims (and other opportunistic foodies like me) who were getting ready to break their daylong fast. Various dishes, appetizers, cakes, sweets and drinks are sold that sometimes would not be easily found at other times of the year.

This is actually the second time we had gone to a Ramadhan food center. The first was at the Satok Market that we had talked about in an earlier post. But we had gone there after walking the regular night market and we did not enjoy that experience as it was really crowded and we were already tired from all that walking. Plus, we had not planned to get our dinner at that market when we went.

This time, it was an intentional decision: we were looking for dinner. So when we walked in, I must say I was a little disappointed. Many of the stalls were empty (I think this was because Aidil Fitri was almost on us and some of the vendors had already packed up to go back to their hometowns to celebrate). The rest of the stalls were selling similar items: roti stalls selling murtabak (meat filled roti) and other rotis; stalls selling homemade dishes like curries and stews eaten with rice; and lots of stalls selling drinks.

But really, where was the variety? The excitement? The kuihs, cakes, desserts, finger foods, etc? As we continued walking, I had a sinking feeling that this was going to be a bust. I told Nate about how my Ramadhan experiences used to be in Kuala Lumpur. So many, many years ago when I lived in KL, Ramadhan was such an exciting time because I got to have all these different kuihs, finger foods, and ayam percik! Ayam percik was an East Coast specialty that was most easily found during this time. It was a grilled chicken that was basted with a coconut-based spicy sauce as it grilled and the flavor was just phenomenal (I guess I’ll have to attempt making it myself). After being away from Malaysia for more than 10 years, I was really looking forward to eating this again. Alas, Kuching is not KL and there was no ayam percik to be found at this Ramadhan bazaar.

Just as I was about to tell Nate we would have to go somewhere else for dinner, we came to the end of the row and saw lots of smoke rising. Ah…here was where all the grilled foods were being cooked and sold. No, we didn’t find ayam percik but we did find satay and also lots of grilled fish. We bought 10 sticks of chicken satay along with ketupat—rice cooked in a woven coconut packet. And we also got two fish—ikan pari (skate) and ikan sardin (though this translates to sardine, both Nate and I think it’s mackerel but we’re not 100% sure—where’s Pat the fishmonger when we need him!). 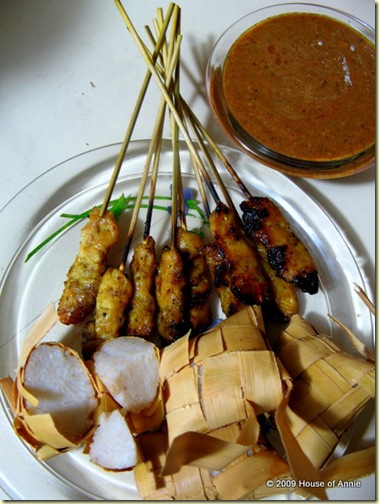 We took our dinner home and dug into the satay first. We immediately regretted not buying more. The satay sauce was really good and the ketupat had absorbed a smoky, nutty flavor from the coconut leaves. It was delicious! 10 sticks between the four of us meant the kids would only get two sticks each. Daniel calculated it out. “We should have gotten 8 to be fair.” Nate said, “no, we should have gotten 20!” 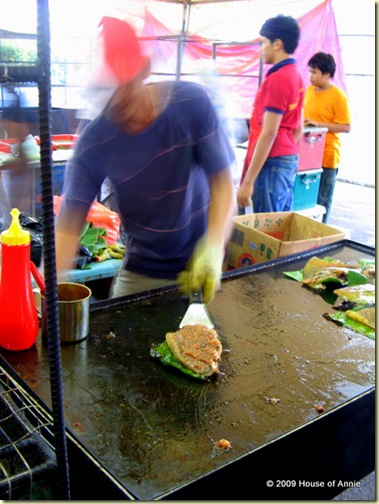 Then we turned our attention to the fish. Let me tell you, these were really fresh fish. The meat of the skate was sweet, light and tender. Perfectly grilled and served alongside a sambal sauce and calamansi limes, they were wonderful! My kids kept on eating (without the sambal) and asking for more. I think Skate is one of those fish that is so kid-friendly because there are no real bones. There is only a middle cartilage which is easy to avoid. When skate is this fresh, it is just heaven. 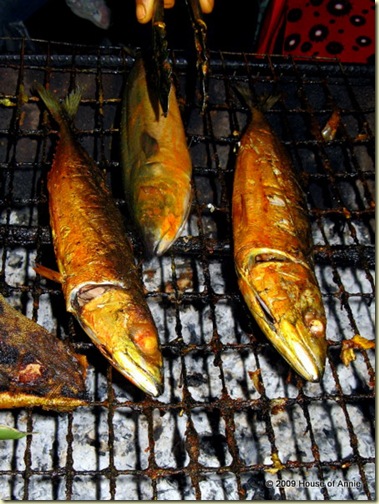 The mackerel was just as fresh. It definitely had a stronger fishy flavor but again, it was so fresh that Nate and I tore into it and even though we gave some to the kids, we ended up eating most of it. And this fish was paired with a different sauce—it was a sweet soy-based sauce with grated onions and some chillies. That sauce partnered so well with the stronger fish flavor and it was so addictive that when we finished the fish, I caught Nate staring at the leftover sauce and I cracked up because I could tell he was contemplating drinking up the sauce!

We were very tempted after we had finished dinner to go back the next day just to get more fish. So even though I didn’t find the things I remembered from my past, I found that there were other things that I never used to get that were just as fabulous. It makes sense I guess that they had good fish, after all Kuching is a coastal town and is known for its seafood.

I wish now that we had gone to that market earlier in the fasting month. Today is the last day and tomorrow we celebrate the end of that month. There will be other feasting opportunities now that we come to the Aidil Fitri and hopefully we will get to blog about that too. Regretfully, we won’t see those canopies heralding the month-long time of fasting and feasting till the next year when the Muslims have their month of fasting again.

For me, this month has been like going through a fast of sorts. I’ve been missing our friends in California, our church, the familiarity of my everyday life, the foods, the kitchen, the Bay Area culture and lifestyle. It’s been uncomfortable and sometimes unfamiliar and frustrating. I’ve had pangs of loneliness and emptiness.

But I’ve also made it through a month. And with a lot to be thankful for, I can now see the promise of potential, the beginning of different, exciting experiences. Who knows what other fish we will find when expecting chicken? What new finds to share, to enjoy and reclaim as my country woos me again?

I can’t wait to share them with you as I experience them myself.